A brilliant billing, but a sad occasion: After four album releases and 10+ years, Finnish Science Fiction Metallers MyGrain decided to quit (read the band´s official statement below). Therefore I – just like most of the audience – decided to party even harder and more cheerfully than usual, in order to give this band the awesome farewell it truly deserves. The first of the four bands this evening was on pretty early, but luckily many had decided to drop in sooner, too, so that the opening act faced a fairly respectable crowd.

Less than Three
Honestly, I was a bit surprised to see so many people on stage, considering the band name… ok bad joke… Not only MyGrain singer Tommy got another chance to show his vocal versatility, there were some familiar faces to spot in the line-up. I found the song material, mixing Thrash, NuMetal and Melodic Death, a bit difficult to totally warm up to, as if they still needed to find their “leitmotif”, but nevertheless promising, check out their Meshuggah cover version: https://www.youtube.com/watch?v=zEgGvH3XRqE www.facebook.com/LessThanThreeBand

Magenta Harvest
catered to my musical taste, focusing on classic Swedish death style – meaning, fucking heavy but with a lot of groove. And then in addition this awesome show, lead by a charismatic front man who looked strangely familiar… Well, maybe not so easy to recognize Finntroll shouter Mathias without fur and warpaint (and nowadays also a beard). The band is fairly new and had released the debut album Volatile Waters only last autumn, but it seems they have it all to make it big in the scene. In the meantime so many people had arrived that soon you felt like a sardine in a can, even though Nosturi offered an extended alcohol area up to the front of the stage. Still most people preferred to stay near the bar – the only bar that was opened this evening … www.facebook.com/MagentaHarvest

Profane Omen
What can I say about this act – they are always fun to watch, and surely also this time Jules & Co proved to be highly professional, highly entertaining likeable hyperactive performers. Once again the audience and the band had a blast, and now and then Jules prompted “MyGrain” even in the middle of their songs. Luckily at that point the Nosturi balcony was made accessable, so you could easily avoid being trampled or squeezed to death – or, even worse would have been spilling your precious beverage …. http://profaneomen.net/

MyGrain
Well, how to describe the mood when the headliner entered the stage – the audience went nuts as soon as the Dreamscape intro started and first hint of a band member´s nose was visible, therefore the guys and the girl were all smiles – yet wasn´t there a hint of sadness, or am I projecting my own emotions here? Nevertheless, the band didn´t waste any time and kicked off their power trip through all their four albums, facing a frantic crowd that carried on the initial amount of enthusiasm throughout the show.

Actually I would have enjoyed to celebrate my personal all time faves like ”Of Immortal Aeons” a little bit further to the stage, yet the huge moshpit prevented any endeavours to even try, unless you were either anorexic enough to squeeze into any gap, or Hulk. Personal safety aside, I carried camera equipment, and have I mentioned those precious drinks already?

Therefore at some point I preferred to observe all the madness on and in front of stage from a safer distance (balcony). Half through their set, the band mutated into MyGrain Allstars, inviting former guitarists Markus Resi and Oskari Lipsanen on stage, who naturally received a rapturous welcome.

Well, like most of the people in the audience, I would have enjoyed those “47 songs” which Tommy claimed they are about to play… but all good things come to an end, also this brilliant gig of a brilliant band. Will miss u, guys & girl … but surely see you all in other bands and projects, and and there is always the vague hope for a future reunion…

MyGrain´s official statement:
Hi there!
In mutual agreement we have decided to put MyGrain to rest. There is no drama whatsoever behind this – the relations of the band members are as good as they have always been. We´ve had the privilege to experience amazing things together during the past ten years but surely there have also been a lot of difficulties and obstacles on the way. All this has taken its toll on the band and for a long time, especially after all the problems we had with the release of “Planetary Breathing”, we have struggled with the question whether we still have the fire and the strength to go on.
As you know, we had a quiet period in 2014/2015 during which we had the time to think things through. As we gathered together to finish the new songs in the beginning of this year, it quickly became obvious that things weren´t like they should be. The original plan was to release an EP during 2015 but for various reasons the burning is gone – it isn´t fun nor inspiring anymore. This is the biggest reason behind our decision. If you can´t put your heart on the songs anymore, it is time to move on. We don´t want to release shitty albums in the future just because we can´t quit before it comes to that.
This was not an easy decision but it was a necessary one and despite all the grief, it feels right and relieving. The saddest part is to let go of this brotherhood called MyGrain, since we´ve always been a very tight unit. We will most definitely be friends for life but of course it will never be the same. But you never know – we still might make some music together at some point, in some form. And we will most definitely continue making music in our separate projects.
A humble thank you goes to you, the fans. We know there´s plenty of you and you have given us a lot of love and support during these years. It has been awesome to connect with you on the gigs and online as well. The memories will stay in our hearts forever. We would also like to thank our crew: especially our driver, photographer and long-time friend Toni Salminen, sound engineer Glen Loit and agent/manager Vilma Lindqvist. Without you we would lack a lot of experiences. A big bow also goes for our former guitarists: Resistor and Matthew. Thank you for sharing this journey with us.
In the words of Douglas Adams: so long, and thanks for all the fish!
Tommy
Eve
Janne
Jonas
Teemu
Joni 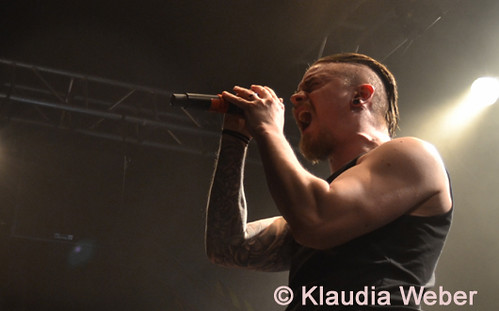