After a 2 year hiatus, Blind Guardian return to the stages around the world with their new album. We took the chance to watch them on the kick off concert of their tour in Eindhoven / Netherlands. But not everything went wonderfully…

Actually, the evening begins badly. On my way to Eindhoven I find myself in the middle of a major traffic jam caused by a car accident. It costs almost an hour of my life and it is the reason why I arrive after the beginning of the Orphaned Land show. Fortunately, I find a nice parking gap very close to the venue.

No more time to waste, let`s go into the Effenaar venue, which looks from the outside a bit like an overhead bin and contains 2 concert halls. A short glimpse into the inside of the bigger hall reveals that it is already pretty much filled. And it also reveals that Orphaned Land from Israel are not everybody`s darling tonight. After a couple of songs I am sure about the reasons: First of all, the movement radius on stage of Kobi Farhi and his guys is quite limited and next, I do not have the feeling to enjoy a live concert here. Too many sounds, like oriental instruments but also parts of the vocals and, if I heard it right, also some percussions, come right from a tape. 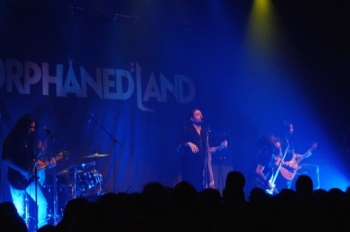 Also the sound suffers from extremely weak guitars and the (in my opinion) overbearing ethnic touch in the vocals. So I share the reserved attitude of most people in the audience. At the end however, some more in the crowd take to the band, so they receive a warm applause after their last song.

After quite a short change over the stage set of Blind Guardian can be seen. It is quite classic and consists of a back drop combined with 3 squares, which hold tons of moving and rotating lights and 2 mirrors like they are known from the album artwork. Well, mirror is actually the wrong term. It is only the frame, in which some “flames“appear occasionally, an effect achieved by fluttering and illuminated fabric. Very effectual, just like the whole light show! 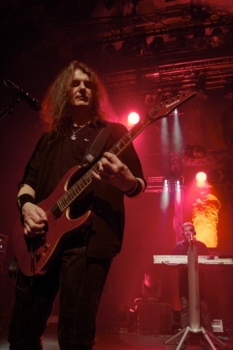 The concert begins with the opener of the new album, `The Ninth Wave`. Although both the band and the audience seem bit lazy at the beginning, the mood is much better than during Orphaned Land before. After the first song Hansi Kürsch welcomes the audience and reports a “Dutch conspiracy“ to the rising applause of the audience – he claims that more and more Dutchmen are working for the band, for example the new live bassist Barend Courbois. With a wink he says that he does not mind, as long as his position is not claimed by a Dutchman…

The following 2 hours turn into a joy ride through Blind Guardian´s history. The set list contains 4 tracks from the new album, but other newer records are more or less ignored: from “A Twist In The Myth“ only `Fly` is being played, a real heavy killer version, and from “A Night At The Opera“ not even a single song is presented. Also the classics from the 90s, “Tales From A Twilight World“ and `Somewhere Far Beyond“ are only featured with one track. In my opinion the set list is well balanced and versatile. But it is pity that there are no real rare tracks in the set list, like Marcus had announced in our interview . Maybe this will change during the tour.

As the time marches on, the performance becomes better and better – on stage and off stage. After a short ballad set consisting of `Miracle Machine` (in a great version with 2 acoustic guitars and some percussions) and `A Past And Future Secret`, played at an imagined campfire, the concert becomes more and more intense before `Imaghinations Form The Other Side` marks the first finale. The entry into the encore set is `Into The Storm` with a slightly modified text (for whatever reason). In the encores are also the 2 highlights of the show: `Valhalla` and `The Bard`s Song` and also the final `Mirror Mirror` is of course sung by everybody. 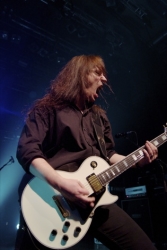 All in all it was a nice, well-done evening and it might be that you can listen to the one or the other of tonight`s songs at home soon. Blind Guardian are recording all of their shows for a new live release. But unfortunately this evening did not only have a bad start for me, it also ended badly. When I arrived at my first class parking gap, I realize that it may not have conformed to the local parking rules. I still don`t why until today, yet I find a 90€ parking violation ticket

Setlist:
The Ninth Wave
Banish From Sanctuary
Nightfall
Fly
Tanelorn (Into The Void)
Prophecies
Lost In The Twilight Hall
Miracle Machine
A Past And Future Secret
Mordred`s Song
A Journey Through The Dark
Imaginations Form The Other Side

Into The Storm
Twilight Of The Gods
Valhalla

Sacred Worlds
The Bard`s Song (In The Forrest)
Mirror Mirror 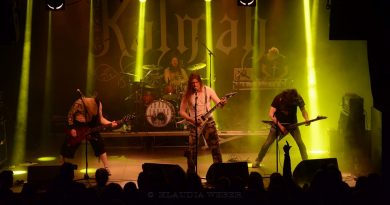