It was 20 years ago that HIM played their first ever gig on New Year´s Eve, still known then as His Infernal Majesty, at Semifinal, where they had to witness their equipment failing them spectacularly. It took them another couple of years to enter Tavastia, Helsinki´s legendary rock venue. 15 years ago that HIM played their first New Year´s Eve show at Tavastia. It was the beginning of a much loved tradition, a tradition that very quickly metamorphosed into Helldone Festival. This time, the 3-day-festival headlining HIM at the main event, featured British Paradise Lost and Daniel Cavanagh, Finnish The 69 Eyes, Children Of Bodom, Kuolemanlaakso and Reckless Love, plus very special, even surprising opening acts on every evening…

Monday Dec 29
RAMBO RIMBAUD
The venue was already pretty full, yet the first festival day remained far from the overcrowded state of the following two days… and it seemed that most people were pretty surprised about this opening performance. The short info about this mysterious act from ´somewhere behind God´s back´ had already prepared me, yet I was still surprised that HIM Frontman appeared all alone on stage (had expected another guitar player). Ville seemed fit and in good mood, with flawless voice delivering very emotional versions of two songs – one was Black Sabbath “Solitude”, the other I could not identify. He seemed to enjoy making and performing music again, which was indeed nice to see. Awesome, I am not the only one who would have enjoyed to hear more… www.ramborimbaud.com

THE 69 EYES
Have not seen these Finnish Goth Rockers live in a while and therefore really enjoyed to rock out to their Goth´n´Roll once again; so did the big crowd filling the venue. This is a band who is a guarantee for a good time, especially when their setlist focuses on the highlights of their long career´s highlights, including a fave I haven´t heard in a long time (Wasting The Dawn) – what can I say, great entertainment. www.69eyes.com
Setlist: Framed In Blood, Love Runs Away, Betty Blue, The Chair, Never Say Die, Sister of Charity, Dead Girls Are Easy, Tonight, Gothic Girl, Red, Feel Berlin, Brandon Lee / Dance D´Amour, Wasting The Dawn, Lost Boys

PARADISE LOST
Haven´t seen this act in quite a while, and noticing that the Brits start their set with one of my absolute faves – Enchantment – and later even more songs from my all-time-fave-albums Draconian Times – such a gig could only turn out fantastically. Which was indeed the case; and although Nick Holmes later announced to be suffering from a cold, well, I did not notice any vocal impairment. Maybe the front man feared that those bitter-sweet tunes drenched in melancholy would be too much for a Kaamos (= Polar night)-stricken audience, as he gave us also a dose of British humour when introducing “One Second”: “If you know it, sing along, otherwise just stare at us”. Not the only reason I left the club with a huge smile on my face … www.paradiselost.co.uk
Setlist: Enchantment, The Enemy, Widow, Isolate, Pity The Sadness, True Belief, Tragic Idol, One Second, Faith Divides Us, So Much Is Lost, Gothic, As I Die / Rotting Misery, Erased, Say Just Words

DANIEL LIONEYE & THE ROLLERS
provided another surprise even for those who were well aware that “Daniel Lioneye” is HIM guitarist Linde´s side project, because there were more of his main band fellows who joined him on stage, Bad Mize and Bil Bao. Or better Mige (bass) and Ville (drums) – I can only repeat that it seems those guys really enjoyed making music again… This pretty sleazy trio ended their Stoner Rock gig with the track “The King of Rock’n Roll”, which was the theme song of Bam Margera’s TV show Viva La Bam. www.facebook.com/daniellioneye

On this evening, those who planned on dancing the night away could also join DJ Jussi69 at Helldone’s Doomsday Disco @ Semifinal. And people like me just tried to relax when the hassle in the sold-out main venue became a bit too much…

RECKLESS LOVE
brought a touch of Glam Rock California Sunshine style to this winterly event. And also a touch of hyper-activity, kicking off their gig with I Love Heavy Metal, So Happy I Could Die and On The Radio – this hit machine kept rolling releasing their Animal Attraction with Sex, Drugs & Reckless love, setting the Night on Fire and taking their fans right Back To Paradise … www.recklesslove.com

One of the bands to sell out a Tavastia club at any time … For this show, the Bodom-kiddies decorated the stage according to the festive season (including some christmas trees), drummer Jaska dressed in the style of Santa´s helpers, and the enthusiastic crowd definitely felt like having X-mas again – in short, those dudes rocked Tavastia once again to the ground and left nothing to wish for. Still, one thing still puzzles me – with all this X-mas-theme stuff, why not playing Silent Night, Bodom Night? www.cobhc.com
Setlist: Are You Dead Yet?, In Your Face, Scream For Silence, Mask Of Sanity / Needled 24/7, Follow The Reaper, Halo Of Blood, Dead Man´s Hand On You, Living Dead Beat, Angel´s Don´t Kill, Lake Bodom, Hate Me!, Everytime I Die, Downfall / Hate Crew Deathroll, Somebody Put Something in My Drink

Wednesday Dec 31
Helsinki met the last day of the 2014 with quite strange weather. Only the scurry of townspeople and tourists reminded of the approaching new year. Everlast (the brand, not the band) fans reserved a place in a queue entering the club since the very morning, despite the dribble.

Kuolemanlaakso
You can only imagine how exciting it is to play on the one stage with HIM. (Photos above show singer Mikko and Bass player Usva before their gig – the latter seems definitely more relaxed… the ed.) Excellent performance with an ominous screeching guitars and poetic texts. kuolemanlaakso.net
Kuolemanlaakso: Intro (Twin Peaks: Sycamore Trees) / Aarnivalkea / Minä elän / Uljas uusi maailma / Tuonen tähtivyö / Me vaellamme yössä / Aurinko / Outro (Twin Peaks)

Big thanks to band mastermind Laakso (on this selfie) for donating all those photos of day 3!

DANIEL CAVANAGH
Incomparable Anathema – well-known creators of a special tone that makes listeners feel blue. This Helldone gave us something not less ingenious than the whole group – a recital concert of a guitarist and one of the founding fathers of the Daniel Kavan´s band. No doubt a must-see. A lot of assumptions about its contents were made earlier, part of which panned out. Indeed a revelation act of a talented English musician and a singer with a wonderful voice. Some viewers expected an acoustic version of Anathema stuff from Danny, the others completely different music, such as covers of Pink Floyd masterpieces. It seems, Danny pleased everyone… Coming up on stage, Danny immediately started to play a very beautiful intense melody. Only the guitar, voice and some sound engineering. And it all immediately inspried the audience! The performance of a simple British romantic was much more than just a concert, it was truly a mystery.

HIM
The main characters of the evening appeared on the stage, blowing everyone´s mind with the first accords of «The Sacrament»! The set-list contained 20 more songs, and the guys had to give 3 more as an encore . HIM made the right decision when choosing the order of songs that were played, giving their fans a little rest from emotional outbursts with good old lyrical hits. Playing  «Rebel Yell » was a great surprise for everybody, this cover hadn´t been played for years. Talking about «Wicked Game », «When Love and Death Embrace» and «Pretending» , everybody sang them all together by tradition. Ville Valo communicated with the audience, changing languages from English to Finnish, made fun and from time to time exchanged glances in a crafty way with the guys from the band. It seemed this long-expected show went too quickly, within minutes. In common, the atmosphere in Tavastia was more than homely. HIM fans grew up with the band and crowds of weeping girls were buried in memories of the past. Ville Valo doesn´t smoke enormous amount of cigarettes on stage anymore, only a black hat and the signature smile remind of the androgynous pale guy. But everything is changing in the world, and regarding HIM even in a better way. Texts of the songs assumed life experience and philosophy and the vocalist´s voice became stronger. So it could be said with certainty that the band gained this particular level that people would go to their concerts, whatever the outcome, and regardless of the success of their albums. www.heartagram.com

HIM: The Sacrament / Razorblade Kiss / Pretending / Right Here In My Arms / This Fortress Of Tears / Your Sweet Six Six Six / Wicked Game (Chris Isaak Cover) / Gone With The Sin / Soul On Fire / Heartache Every Moment / Rip Out The Wings Of Butterfly / The Kiss Of Dawn / In Joy And Sorrow / Poison Girl / Killing Loneliness / No Love / Join Me In Death / Buried Alive By Love / When Love And Death Embrace / Rebel Yell ( Billy Idol Cover) 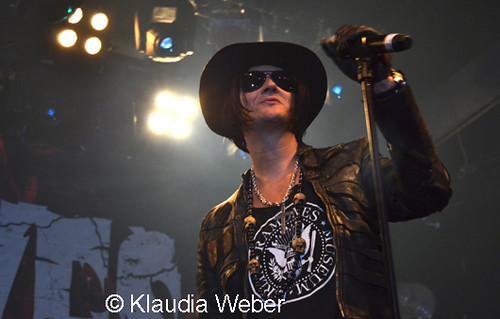