After their previous singer left the band, Flyleaf are back with a new vocalist, album, changes and energy. Reason enough to ask Pat Seals, Flyleaf´s bassist, for a little e-mail-interview with STALKER.

The US isn´t in lack of good rock bands, so what makes Flyleaf stick out of the masses in your opinion?
Flyleaf´s defining signatures, in my opinion, are that Kristen May is our singer; her unique vocal talent in itself sets us apart. Also, for whatever reason, many of our songs end up becoming very special to our fans, many of whom draw hope and life inspiration from the lyrics.

Could you tell a bit about the album; the process of writing and recording it?
“Between the Stars” was written over several sessions last year, with us making as many demos as possible. The recording happened in Los Angeles in May 2014, with Don Gilmore producing. Drums were laid down first at NRG and then guitars, vocals, & keys at the house of our friend Jordan McGraw, guitarist/mastermind of Stars & Stereo. It was the most fun I´ve ever had in the studio, which had been stressful in the past, at times. Don was intuitive, incredibly funny and kept things light, even during the various challenges of the project. He has a gift for getting good performances out of people.

As all songs deal with the topic “love”, what does it mean to the band members personally?
In my personal view, love is that special form of insanity that many humans exhibit; the ability to put another´s needs before one´s own. It is patient, kind, all the rest, ergo very difficult to accomplish perfectly, but then love does cover a multitude of sins.

Does the album have a message?
“Between the Stars” seems to tell me that our lives are comprised, affected and defined by our relationships. There´s a significant line from ´Magnetic´: “…filling up the space between the stars, we are magnetic…” Life can sometimes feel like that dark space in a night sky without the connections that span or occupy that space, that draw us toward one another.

How much did the parting from band founder and singer, Lacey Sturm, change the band and why did she leave?
To answer the second question first, she officially left to be home with her husband and children. It changed the band a great deal, obviously, but it freed us up in many ways, especially regarding the songwriting process. Kristen May is a great writing talent, and her ability to adapt and incorporate spontaneity gave way to the most mature and compelling album we´ve made. Also, Kristen´s ability as a live performer is bar-none, as many sceptics have admitted to us upon seeing the new Flyleaf.

Why did you choose Kristen May as a new singer? Was she in a band before, and if so, which one?
Kristen´s unmistakeable talent was a huge factor of course, but her character equals her ability. I´ve observed her to bring peace and joy to the rooms she enters. Her positivity is contagious, and definitely strengthens Flyleaf as a whole. She was previously in Vedera – check ´em out )!

What was the reaction from your fans regarding the new singer?
Some fans weren´t happy, as it can be difficult to accept the fact that something you love has changed so dramatically. Fortunately, many of our Flyleaf fans were kind and dedicated enough to see us through the transition. On our recent US tour, it was incredible to hear them singing songs from “Between the Stars” back to us. One of our oldest fans, Brittany Wigand, still runs our fan site ).

Do the band members have side-projects?
Jared and his wife Kat play and write songs together, and Kristen does writing and performing of her own as well.

How did you manage to get “I´m So Sick” from your debut album “Flyleaf” in movies like “Live Free or Die Hard” and “Resident Evil: Extinction”?
Our manager along with various individuals connected us to those opportunities; as is the nature of such. Getting music into movies is a competitive game, to say the least.

Was this a big instrument in your breakthrough in the US?
Surely. Radio has done a great deal for us in the past, but Flyleaf´s movie ventures did increase our exposure.

Why did you change your label from Octone to Loud & Proud Records and what was the difference for you since?
A&M Octone actually folded as a label, leaving us as a free agent. Since joining with Loud & Proud, it feels like new momentum and excitement have been injected into Flyleaf´s engine. They are a small label with a great deal of experience and a tightly focused work ethic.

Now, here is a chance to clear up rumours. Is Flyleaf a Christian rock band? Or is the band not dealing with religion, just the members happens to be Christians?
I´m not sure what exact rumour I´m clearing, but we are all Christians. Flyleaf´s music is for everyone, and hopefully extends the love that Jesus represented, which is loving your neighbour as you love yourself. To further explain, allow me to quote Jon Foreman of Switchfoot, who is much more eloquent than I (and cool…he is cool): “My songs are a part of my life. But judging from scripture I can only conclude that our God is much more interested in how I treat the poor and the broken and the hungry than the personal pronouns I use when I sing. I am a believer. Many of these songs talk about this belief.”

What music is right now on your own play list?
Electric Light Orchestra was blaring in my house today for awhile. I´ve been on a Big Boi/OutKast kick lately as well.

Is there anything you want us to know about Flyleaf, which is not commonly known? As in something like “Vegans”, “playing soccer”,”did a sex tape” etc.
Sameer is a vegan, Jared is unbeatable by any other band or crew member at the FIFA Soccer video game, and the closest thing we have to a sex tape was made by Flyleaf´s tour manager and myself and can be viewed here ).

Are there plans to tour Europe in the near future?
Flyleaf is looking to coming to Europe as soon as possible, though we must first complete the US tour scheduled for this February. 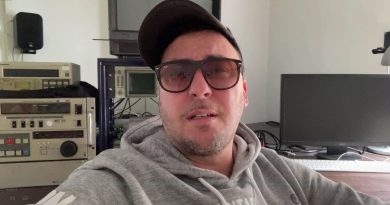