No 1 in the charts, sold out shows – the German Metal institution Accept is rolling on a wave of success. What´s behind this reunion, what can put the core band members into a “Blind Rage”? Guitarero Wolf Hoffmann lays it on the line…

Congratulations for your no 1 album in the German charts! It took 14 albums or 35 years to achieve that. Did you still expect it?
No, not at all! It was a big surprise and we are totally happy. As an artist you can not plan to achieve a certain position. Something like that is always out of your control. We just try to make the best album possible and the rest depends on other factors.

You are the inventors of German Speed Metal and the title “Blind Rage” goes in this same direction. With the exception of the opener “Stampede”, your new album is more or less dominated by melodies and not by speed and aggression.
A title is only a title. “Blind Rage” fits perfectly to our music and, even more importantly, it fits perfectly to the artwork. We saw it and we knew that it should be our next cover artwork. It is exactly what we want to express with our music and feels like Accept. The next question was what could be the title. “Blind Rage” seemed to fit, especially because there was no song that fits to the bull image.

Your last albums inspire by their guitar and vocal melodies.
Yeah, great!

I think that the focus of your earlier albums was much different. How has your way to write songs changed since your new beginning?
It changed because we now have a new vocalist who can perform the stuff in a different way. But we wrote the songs as we always did. We wanted to write songs which we could have written 30 years ago. That sounds easy, but it is difficult. Meanwhile we are much older and many things happened in the past. We can not turn back time. But from the style, the new songs might have been on our albums from the 80s. “Dark Side Of My Heart”, for example, sounds like from 1986. The difference is just that we now have Mark, who performs the stuff fantastically. Mark can not only scream with full power, he also can sing melodies. He actually sounds like 2 singers in one person and that is what we want to feature on our albums. We always had more melodies than any Thrash Metal band. We have the focus on melodies which make you sing along. Sometimes we play them on guitar, sometimes we use them as vocal melodies. But the focus is always the song. When the song is not good, you could produce a nice video, but it won`t work. The song is the most important for us.

“Blind Rage” contains the contains the song “Dying Breed”, which contains the melodic singing you mentioned. How far are the lyrics referring to you or to your music?
The song is about the first generation of Rock musicians, which had influenced us: Judas Priest, AC/DC and the Scorpions. They are all one generation older than we are. This generation, bands like Uriah Heep, Deep Purple, Status Quo or Queen, influenced us. This is the generation that is slowly leaving, maybe because they retire or they die. Ronnie James Dio or Jon Lord are people who changed our lives. With this song we wanted to bring a toast to these guys, a salute at their grave. “Thank you buddy, this song is for you, buddy!” You got to understand this song this way. This is actually not concerning us, because I think that we still have a couple of years to go. But every generation has some influence on each other. I often hear stories from people who say that they play guitar or founded a band because of us. Today some of them also have famous bands, which sound quite differently. But we were also a reason for their career.

It is well-known that you also like classical music. There are numerous projects of Metal bands playing with symphonic orchestras, but there is none of Accept. Wouldn`t that make sense for you?
We did not think of that yet. Many take their compositions and add some orchestra parts or even do an arrangement for orchestra. But I find the opposite way much more interesting: playing a classic composition with our instruments. I don`t think that our songs would work with violins and instruments like that. And I have to say, that I don`t like most songs other Metal bands did with orchestras, because the songs themselves have to be written for that. Our songs base on guitar riffs and playing a guitar riff by orchestra results in a catastrophy. Once I heard Deep Purple`s `Smoke On The Water` played by a brass section. It was at the retirement of a German minister and he requested this song from the Bundeswehr big band. That sounded like shit! I have the same horror vision with “Balls…”.

I assume that you don`t like an album like Metallica`s “S&M” either.
Not really. In this case, I think that the orchestra does not harmonize with the band. Both were struggling to prevail. But, as I said, this is not a topic for today. Maybe we will work on orchestral stuff one day.

On your website you announce a project called Acceptology and you also need help from fans for it. Please explain what it is and how far the fans can help you!
We want to create a collection of stuff our fans collected over the years. Today a fan came to us who had an old poster from 1979, when we played for 5 German marks (roughly 2,50e) somewhere in Osnabruck. He just ripped it from the wall and put it in his rehearsal room where it remained for the last 35 years. It is great to show items like that to other fans as well. We also collect audio or video snippets, tickets and all other stuff you have at home. Our first idea is to create some kind of forum where fans can share their Jurassic stuff. Maybe we will create an official release out of it one day, maybe as a CD, DVD or even a book. That depends on the kind of media the fans submit. But right now we are still collecting and we are not yet focused on a certain format.

You were very successful in the 80s, then Udo quit the band. After your new start with Mark, you had great success from the first second. Do you sometimes ask yourself where Accept could be today, if there had not been that split?
Anywhere because we had to split. There was no other way. For me, this question is a rhetorical one. It happened like this and not in another way. Udo refused that days to work with us any longer, so we had no alternative. Now I am happy that we found Mark as a new vocalist and I am happy about his gigantic success. Everything else doesn`t matter.

As far as I know, your split in the 80s was also due to economic reasons. In the 90s you had again a split in period when Metal was commercially down…
Udo quit the band 25 years ago and he returned once. There is nothing more to say about this. I am really tired of talking about this old stuff. Let us talk about today`s success instead!

Well, I actually have something else in mind: Your new beginning with Mark happened at a time when Metal had a boom. I read some statements of people who think that these decisions were made because of financial reasons.
That is total bullshit! Those how think that Accept returned because of the money do not know anything about the business. Sorry! I had a successful career as a photographer and it would not have been a problem to keep on going. To think something like this in our time, when it is hard to make money with music, is absolutely idiotic.

On your website there is a quote of a Swedish journalist: “Accept refuse to be a nostalgia act.” How much nostalgia is in your today`s success?
When we returned with Mark, we decided not to be a nostalgia act and play only old songs. It would have been possible, especially because they were all written by me. But it would have felt like being a cover band and we did not want that. We want to write new songs and record new albums and we still have many ideas. Therefore we recorded “Blood Of The Nations”.

My last question is a bit more personal: You always give everything on stage. How do you remain fit?
In every possible way: Healthy food, enough sleep and a workout. Sometimes I go to a gym. I have my own concept which I do at home and also on tour. At home is of course much easier. On tour is sometimes a bit more difficult because some hotels don`t even have a gym. It is always a challenge to remain fit.

Thank you for the chat! 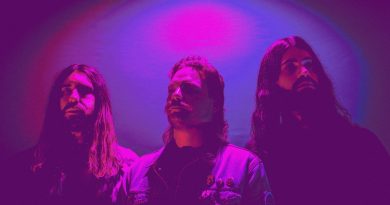