11.+12.10.2013 Nosturi, Helsinki, FIN
Friday Oct 11
Right from work, some quick meal on the way (due to a long queue in the fastfood restaurant, it had to be so quick I would not really call it ”happy”), I hurried to be there when doors open, as I expected another queue… which was not the case, to my surprise. And other stuff should not quite meet my expectations…
When RATFACE opened the festival evening on the small Alakerta stage, there was not much audience to enjoy their In-Your-Face Old-School-Deathmetal/Grindcore. And unfortunately the band preferred minimal lighting, in red, which turns photographic attempts into a Mission Impossible challenge. Which I was not quite in the mood for, so I soon gave up soon and went upstairs, not to miss the Wolfheart show. Barely a dozen people there, but luckily the pit filled quickly when the Alakerta gig ended, and it should be filling up constantly after that … good. But then somebody told me a fact I had not quite fully realized at this point: ”there are no overlaps”. Meaning, when one band stops playing on stage A, the other one on stage B begins their show, and vice versa. Meaning, according to the list also the following band has a very short 25-30min slot …

WOLFHEART
Well, such time table coordination is basically a very good idea. Yet I had expected a bit more showtime for a band that celebrates their official record release here… would have loved to hear the complete Winterborn album performed live this evening, but even this short presentation was enough to impress the audience – even people who had never heard of Mr. Saukkonen or anything of his previous bands (e.g. Before The Dawn) before…
First it looked like Wolfheart would continue in Black Sun Aeon style – just playing, no audience contact, but towards the end the mastermind himself SPOKE … yet this one man army left anything that can be defined as stage show or ”making contact with the audience” to the flanking live-string-stormtroopers Mika Lammassaari (Eternal Tears Of Sorrow), and Esa Usimaa (Rain of Acid). Former BTD colleague Joonas Kauppinen on drums could rather be heard than seen. The setlist provided a quite a good representation of the debut album, starting with the opening track The Hunt, including e.g. Ghosts Of Karelia and ending with a brilliant Routa pt 2 that provided several gooseflesh moments… I heard later that there were sound problems on stage, but not notable from the audience perspective – even the very opposite; I cannot think of anything that could have been better. Great show, guys, looking forward to the next (hopefully longer) one…
HATEFORM
More Old School Death at Alakerta continued the festival, in a style that I found more appealing than the first band. More plus points: the aggressive show was pretty cool and they had better lighting. The crowd grew constantly, because many came especially for the next act on the main stage.
DEATHCHAIN
from Kuopio were indeed a treat, also visually, not only because of this unique skull microphone stand. Their sound – they themselves call it ritual death metal, which is also the title of the new album that was released this April – is a mixture of death and black metal with some doom elements, actually quite appealing and hypnotic – because I would not use the word ”catchy” in this context, although the one or the other chorus invited to shout along … Maybe it is part of this concept of ritual, but at some point I wondered if indeed all the lyrics of this band deal with Pazuzu …
SHEAR
on Alakerta stage was another band on this evening that I had been looking forward to see, as they had left quite a good impression on the previous live occasions. Wow, what a show, the stage seemed way too small. Not only because of so many band members, but also front lady Alexa Leroux absolutely ruled. Great voice and great stage attitude – casual and friendly but still ”no bullshit”. And finally a front woman who has the guts NOT to reveal all her goodies just to attract male audiences – CHAPEAU. The cliche of ”small person, big voice” had been used so often, but there is no better way to describe it. Shear´s Metal / Power Metal mixture worked nicely and brought the massive crowd – for this small venue – into the Friday night party mode.

EINHERJER    band photos here
started upstairs with a little delay, which was good from the photographer´s point of view, as you had to squeeze yourself into the photo pit, which was now pretty crowded, too… Those Norwegians are one of those bands I had often heard about, but never really heard the band, so I was pretty curious. And curiosity turned into affection, because this cool mix of Folk tunes, classic Metal with Death / Black / Pagan elements and even turning into Alternative Rock music, almost on a Pop level, is simply pure ear candy. Those guys seemed to have a lot of fun on stage, which naturally inspired the at this point quite massive crowd. Actually it was so tightly filled downstairs that I wondered if the organizers would consider opening the balcony area … The Finnish fans celebrated this band enthusiastically, and indeed, this is a band I want to see again, and luckily their set ended exactly with my ”last call” to catch the last tram. I chose to skip the last act as well as day 2, though. The experience from previous weekend (Trash Fest) had shown me that my strength is limited, especially at a festival with two stages on 2 different floors – therefore let´s have another STALKER reporter taking over … (KW)

THYRFING Band photos here
When I first got into both Thyrfing and Einherjer about a decade ago, the Norwegians´ Blot instantly blew my mind and overshadowed their fellow vikings´ Vansinnesvisor to an extent that bordered on the unfair. But time puts many things into balance, and comparing the most recent output of the two bands, victory goes to Sweden. The same was true for their consecutive appearances at Metalheim: Einherjer delivered a solid performance, but Thyrfing owned the house. Not only is Jens Rydén (ex-Naglfar) a more charismatic – not to mention attractive – frontman than the somewhat stiff Frode Glesnes, but also the song selection – three new ones, three from Vansinnesvisor and at least one from each of the remaining albums – left nothing to desire. They also scored the largest audience of the otherwise rather scantily visited event – hopefully enough to encourage them to visit Finland more often in the future. 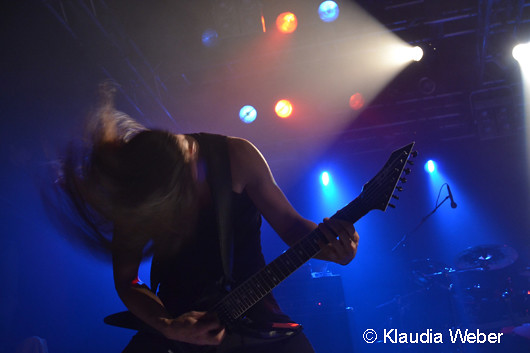 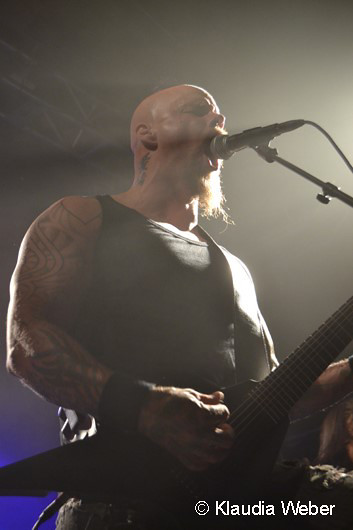 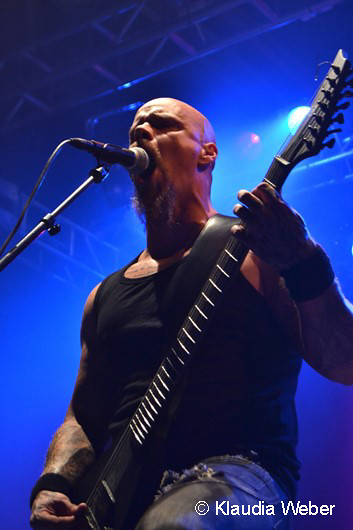 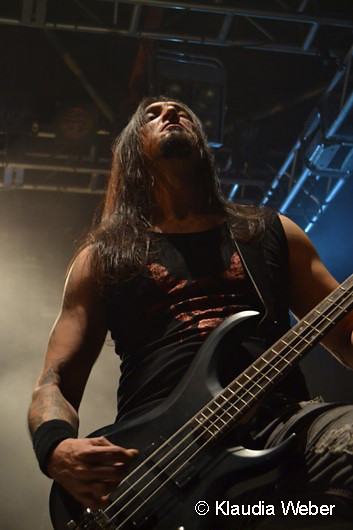 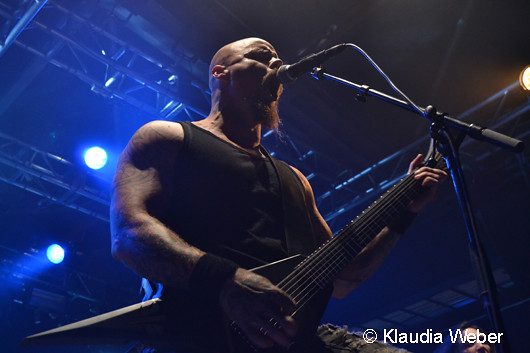 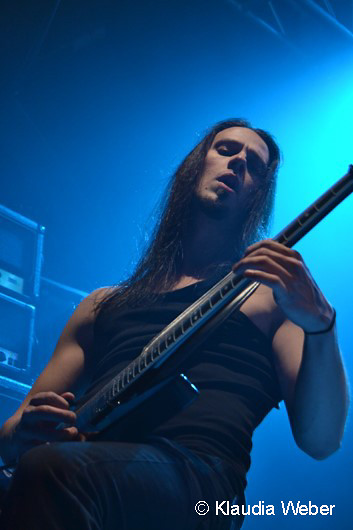 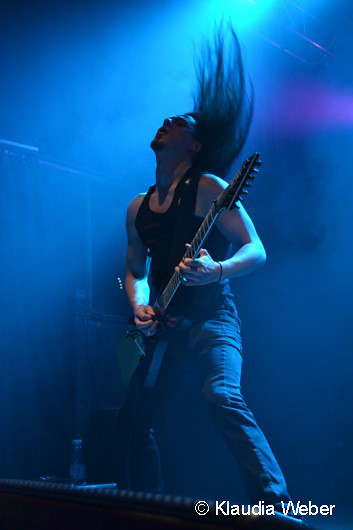 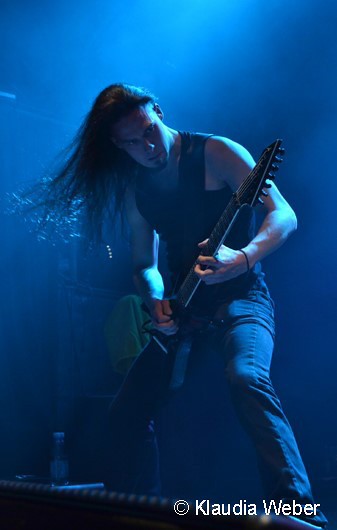 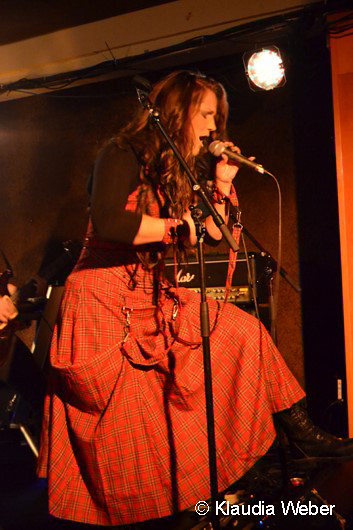 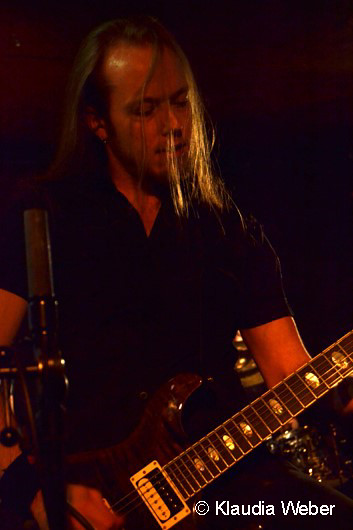 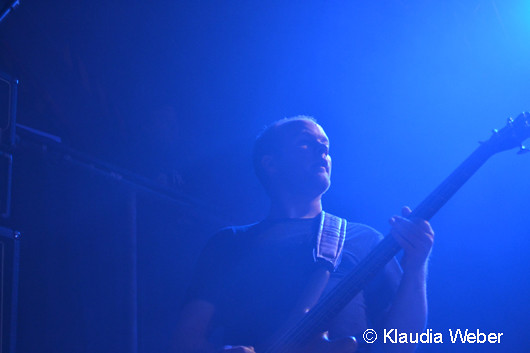 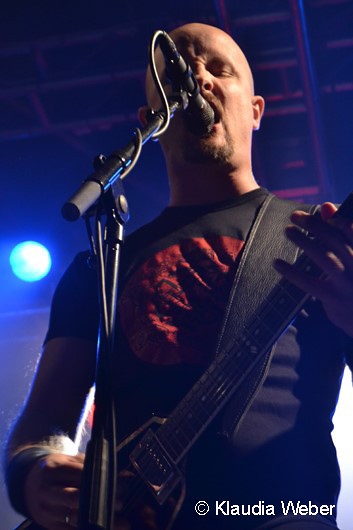 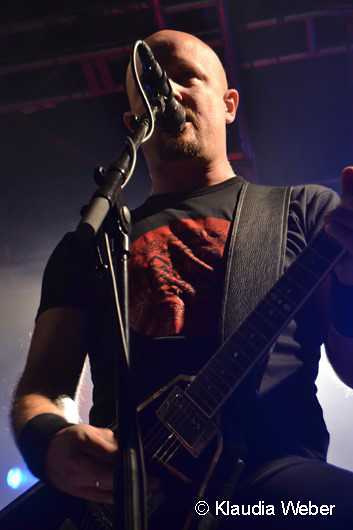 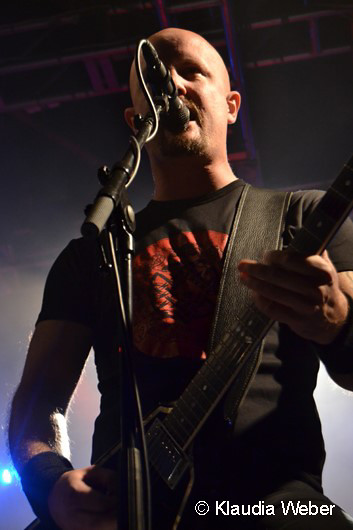 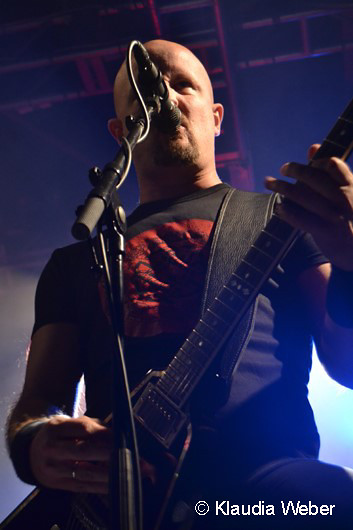 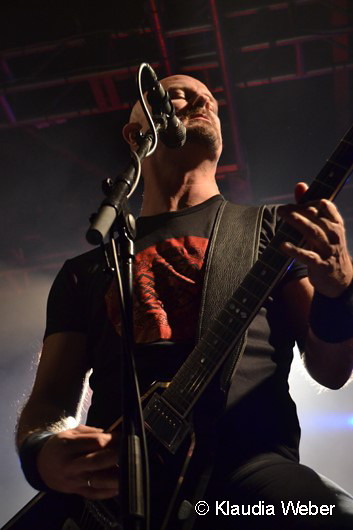 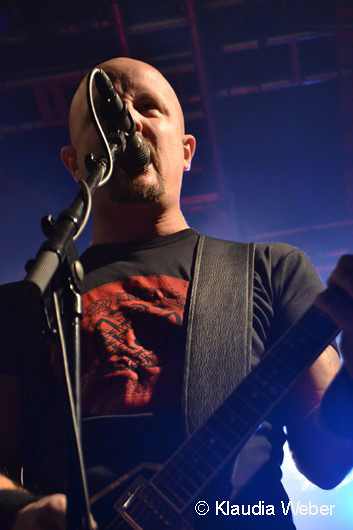 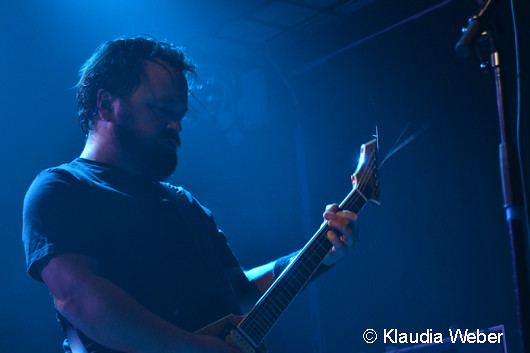 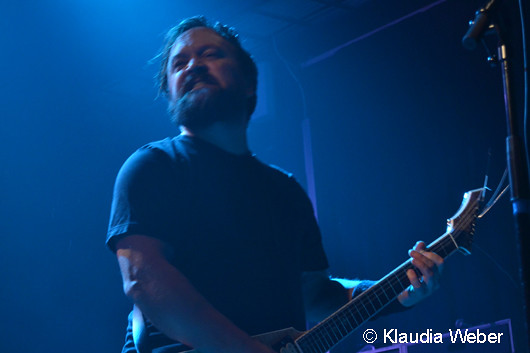 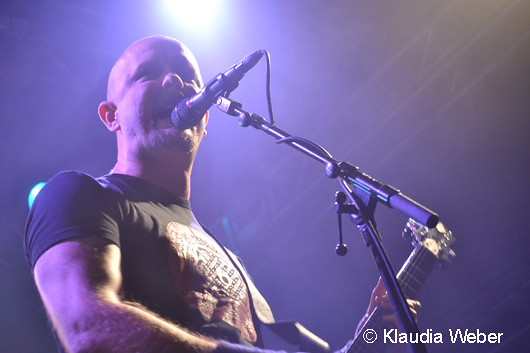 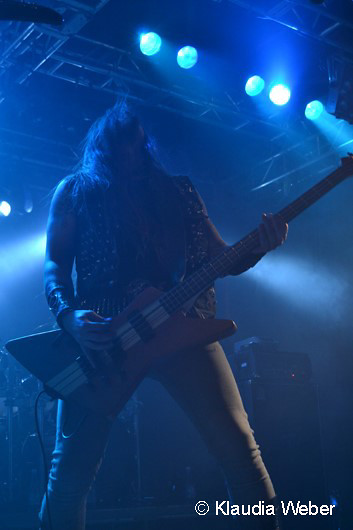 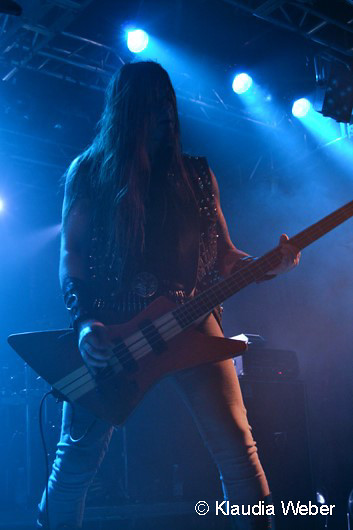 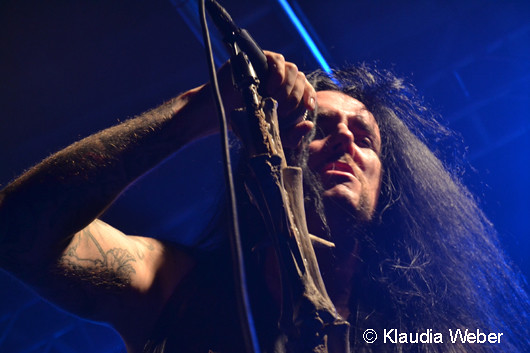 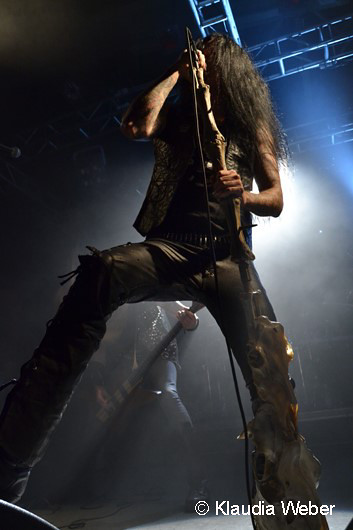 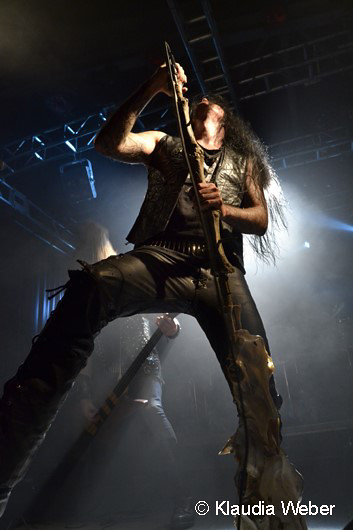 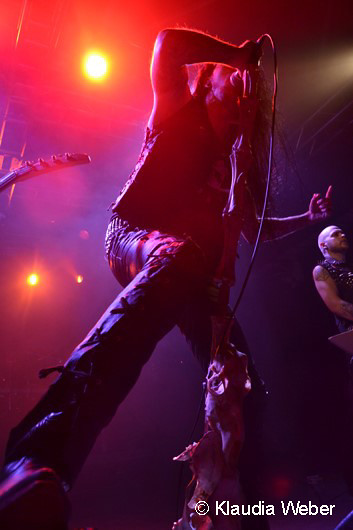 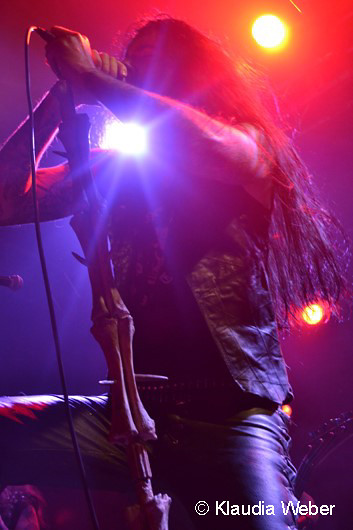 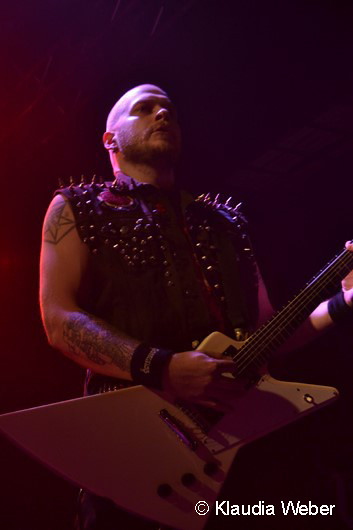 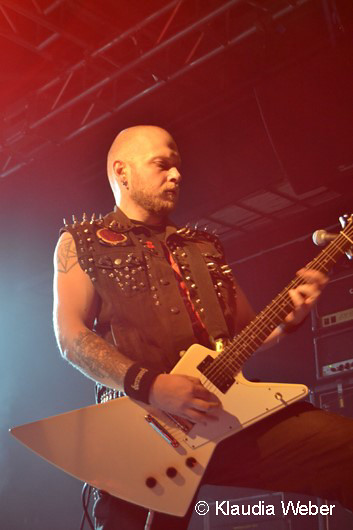 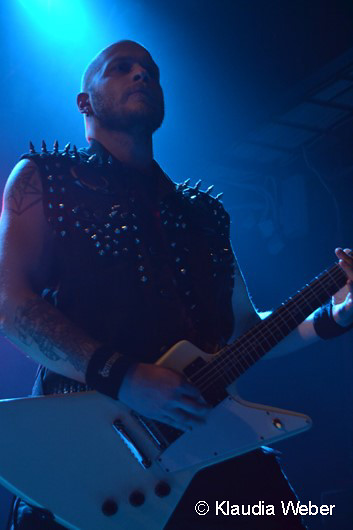 Saturday Oct 12
While this year´s Metalheim was largely dedicated to viking metal and the memory of Bathory, this epic theme was effectively counterbalanced by a well-dosed portion of grindcore, particularly on behalf of Feastem.
:pic:metalh13_text/feastem.jpg:pic:
Although they, too, managed to be fairly epic – in terms of song announcements, that is. In best Napalm Death tradition, the entertaining and educating introductory stories were roughly as long as the tracks themselves, cases in point including “Älä luota naapuriin”, “Music For The Masses” and “Working Man Blues”. Additional cuteness points for the goggle-eyed owl on Olli Nokkela´s guitar.
Said bird was not to be the only adorable animal of the evening. From the promised land of brainless band names, we were visited by Milking the Goatmachine, Band photos here who turned out a good deal more fun than I would have dared to expect. Their placement in the line-up made sense, too, as their offering fell somewhere between the preceding grindcore and the more melodic fare that was to follow. Don´t ask me for a forecast as to how far their concept might take them before wearing itself out, but I for one couldn´t help smiling at a singing goat banging the drums accompanied by three others playing guitars and bass. I even felt tempted to buy the goat mask sold at the merch stand – too bad it doesn´t fit the topic of this year´s Halloween party.
An unmistakable visual concept based on the band´s name was presented by the next act as well, but the similarities pretty much ended there. Hooded Menace from Joensuu decelerated things considerably, contrasting the rest of the evening´s program with stately, melodic doom metal. Beautiful twin guitar leads and the sort of riffs that kill slowly, with two songs from each of the band´s three full-length albums – much to my taste in general, but ultimately a bit too repetitive.

Ereb Altor,    Band photos here    on the other hand, were exciting enough for me to buy their latest vinyl on the spot, although I had hardly heard of the Swedes before. Turns out they are a side project of Isole, created to continue the musical paths explored by that band´s earlier incarnation Forlorn back in the 1990s. The most obvious difference between the twin bands is that in Ereb Altor, vocals are predominantly harsh and the almost sole responsibility of guitarist Crister “Mats” Olsson, while Isole singer Daniel “Ragnar” Bryntse sticks mostly to the guitar. Which makes his few clean contributions, for example in “Niflheim,” all the more effective. Like Forlorn back in the day, Ereb Altor cultivates a distinct Bathory vibe, and it was only fitting that they honored Quorthon with “Twilight Of The Gods” before ending the set with their own hymnic “Myrding”.

Had those two last songs switched place, the end of Ereb Altor´s set would have doubled as an introduction for the next and final band of the evening, which was, well, Twilight Of The Gods. Band photos here A couple of its members had already stood on the same stage the night before, namely Einherjer´s Frode Glesnes (here on bass) and Patrik Lindgren of Thyrfing. Frontman Alan Averill was no stranger to Metalheim either, having played the same festival in 2011 with Primordial. His singing style, antics and intense stage presence are no different in this alternative environment, but it was very pleasant to see him without make-up for the first time. As the name suggests, TOTG started out as a Bathory tribute; however, this year they released the first album of their own originals. All of these were played at Nosturi, but fortunately Bathory was not entirely forgotten. “Under The Runes” stood out in particular, with beautiful solos by both guitarists. A few songs earlier we were regaled with “Home of Once Brave” and the closer of the set was “Blood Fire Death”, preceded by “At Dawn We Ride” – a TOTG original, but one that would pass as a Bathory cover all the same. (TS)

Once again, Metalheim managed to combine a line-up beating many of the bigger and more expensive summer festivals with the intimacy of a club gig, and hopefully the tradition will continue. A bigger audience would have been well deserved!