Borknagar are in a Black Metal band class of their own. They will surely prove this once more with their new album “Urd” which was released now. So this was a good occasion to do a short interview with guitarist Jens F. Ryland.

First I´d like to say that on my opinion your band is doing good Black Metal music. My favorite albums are “The Archaic Course” and “Universal”. And I´m really looking forward to the new release “Urd”. I appreciate that Borknagar is really different to all the other Black Metal bands. You are brave enough for experiments and that´s good.
Hei there, this is Jens F. Ryland answering these questions. Thank you for the great support, your favorite choices are a bit different from what I ususally hear, but good choices!

Borknagar have many members from different bands like Vintersorg, Molested and Wind, so how did you come together?
When Øystein gathered the first lineup in 1995 I don´t think he expected this to become more then a recording, and he brought in musicians that he already knew and who wanted to contribute. But Borknagar kinda grew out of that idea and already after the second album (The Olden Domain) there was a request from Century Media to bring the band out on the road. This brought on the first significant changes, among others I was brought in. Being a touring band with a multinational recording contract we really didn´t have much trouble persuading people to work with us after that.

What has inspired your music?
The ground brick of Borknagar is the Nordic theme and atmosphere with a focus on nature and how the elements of nature yield their powers. Living in Norway, you´re much more in touch with the Arctic nature then almost anywhere else, and I guess this gives an atmosphere to the music that many find interesting and perhaps exotic. I grew up far North of the Polar Circle, so far North that in winter the sun is below the horizon for 6 weeks straight and in summer we have one long day with the midnight sun. I grew up with whales coming up alongside the boat when we were fishing, with elk and reindeer outside in the garden and all this. It´s great inspiration that sticks with you for life…

What is different on “Urd”, compared with the other albums?
First of all I guess you will notice that the production is significantly improved. Working with Jens Bogren (Fascination Street) has been very rewarding, he was able to highlight a lot of the details in the music. Secondly I think the fact that there are 3 distinct vocalists will catch your attention, while Vintersorg is doing all the grim vocals, he shares the clean vocals with ICS Vortex and Lazare.

How did your sound emerge which makes you so different from all the other Black Metal bands?
The soundscape of Borknagar is a result of all these years of cooperation, of the influences from the previous members, of feedback from fans and critics and most important; a developing band. It´s not like we try to be different, it´s just how we sound.

Every band has a story on their albums, so what is yours?
Oh, that one is not so easy to answer. The lyrical concept of Borknagar has always been to make the listener form his own set of perceptions from the lyrics while we bring the themes in. All the songs have their different meanings and themes, but that takes a bit more explanation and would be best described by the writers themselves.

What was the best experience you´ve made?
I personally am a big fan of going out to play live and meet the audience face to face, and I have some really awesome experiences from that. Both playing live in front of a 25 000 huge crowd at Wacken or the personal engagement we have some places, I can mention the hospitality in Estonia.

What was the worst experience for you?
I have run into some artists who haven´t impressed me very much with some ignorant and arrogant attitude, I really dislike “rockstars”!

Is there something in your life that you ever want to do?
All my personal dreams are pretty much linked up to music, I have a hope to see more of the world with a band. It´s a very unique way of traveling and very fun when things go smooth. On my priority list now is South America, China and the rest of Asia and it would be a very valuable experience to actually play concerts on the African continent, I know countries like Egypt, Morocco, Tunis and South-Africa host metal bands.

What is most important thing in your life?
Family, first and foremost. I have 3 kids and a lovely wife and nothing comes before them.

Thank you for the interview and good luck with ,,Urd”, the new album. Greetings to all Band members of Borknagar!
Thank you 🙂 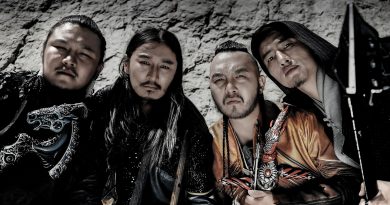 The Hu: Awake your inner Warrior