Stalking Finns with very long, up and forwards point hair and shoes is all about the almighty Vodka – in hindsight I came to realise that we should have opened the bottle earlier on to open up their lips a tad more. In other words: Here´s an interview with Leningrad Cowboys.

Your latest album has been taken in by the media quite well, how has it been performing it live?
Pemo: Yeah, people are singing along surprisingly well at such an early stage, so it´s a positive surprise.

Do you have a favourite song that you like to play live?
Pemo: No, I hate music. I don´t like a single song.
Pauli: Actually it´s quite nice to play a song, which we haven´t rehearsed.
Pemo: How can you say that it´s fun to play it if we haven´t even rehearsed it?
Pauli: Wha?
Pemo: Wha?

Okay… if we look at the latest album, how did you end up with the more Mexican theme?
Pemo: Well, it´s been along for quite a while in one form or another, so it´s not a new thing.

Yes, but it seems to be a bit stronger this time round
Pemo: That can be.

If we look at your previous production, your latest album was in 2006 and it was mostly covers and the one before that was in 2000. Were you on hiatus – and if so, why?
Pemo: Well, I had a kind of washing room, which I had to build. And Pauli had his dad´s bathroom´s floor, which he had to renovate.
Pauli: Yeah, a sauna renovation. It turned out really nice.

Here´s a reader´s question: What do you like about your country the most?
Pemo: Vodka.
Pauli: Vodka.
Pemo: Sauna.
Pauli: Yeah.
Pemo: Ladies. And the sound.

The sound?
Pemo: The sound.

Complete the following sentence: A Finn, a German and a Russian go into a bar…
Pemo: …and nobody got out.

It´s well known that life on the road can be hard –do you have any survival tricks?
Pemo: A pick-me-up-set (for the readers, a pick-me-up is an alcoholic drink to get rid of a hangover) has been quite popular and if you manage to keep it and your hobbies within limits, it helps and then you may need a pick-me-up-set.
Pauli:Doesn´t matter what it is.

What was your most absolute WTF moment during your career?
Pemo: It was February 13th 1993 and we didn´t have vodka at the gig.

You´re kidding, right?
Pemo: It was a pretty terrible situation.
Pauli: It also happened that we were in the SAT 1 morning studio playing and a studio dog bit our drummer in the thigh and stole his stick.
Pemo: In the middle of a song.
Pauli: Yeah, in the middle of the song, it was quite fun.
Pemo: It was pretty radical. It was a dog called Lother, which has a jaw seven times bigger than his head, fucking ugly.

If you talk about Finnish music, which has an element of humour in it, Eläkeläiset come into mind –have you played with them or have you planned to do so?
Pemo: No, we haven´t had any interactions. We have played in the same places, but not really.

Well, the both of you have a quite strong fan base in Germany.
Pemo: Yeah, but we do this stuff seriously. This is deep, this is soulful stuff. This humour stuff doesn´t really go through.
Pauli: You´ve lived for too long in Germany.

That could be. On your new album, it´s really easy to hear influences from Beach Boys and Scorpions amongst many –where did this come from?
Pemo: It´s actually because we thought that all of the songs, which have turned out to be covers in our previous albums were our own original songs because our record player broke in -91 and we couldn´t listen to music since then, so we didn´t have any influences. It was a pretty hard blow to hear that the songs weren´t ours after all.

You guys seem to be in pretty good shape if you compare yourselves to other bands, is there a specific reason for this?
Pemo: Hey, look what our tour manager found. Are these water bottles? Spasiba.
Pauli: *opens bottle*

Pemo: That´s a sound I know. Are you here with a car?
Nope.

Okay, last question: Where does the best vodka come from?
Pemo: A bottle. 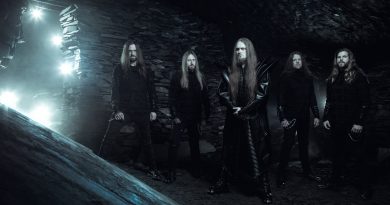 Orden Ogan – The Sky is the Limit

The Blanko: Trust the Inner Voice