28.-29.10.2011 Nosturi, Helsinki, FIN
A nice idea to have a festival happening in two cities at the same time, namely Helsinki (Nosturi) and Oulu (Teatria) – 10 bands in two days, and line-ups are exchanged, that means the Helsinki-Friday-package plays on Saturday in Oulu, and the other way round… But it seems that in any case the audience interest remained below expectations. Was it this end-of-the-month (and all dough gone) situation, or too many competing Halloween-Parties? It could have been the lack of attactive bands, that´s for sure…

Friday, Oct 28, 2011
Ghoul Patrol
The first band to have the questionable honor of testing the acoustics of a 900-capacity hall filled with a mere dozen people was Ghoul Patrol. A new acquaintance on my part, but they won the Finnish Metal Award for Best Demo Act in 2009 and now have their debut album out. What they delivered was solid groove metal (or “death´n´roll”, as the band prefers to call it) with a nod towards the general direction of Alabama and Texas – the latter association being visibly supported by singer Pekka´s ZZ Top shirt and beard. (TS)

MyGrain
The second band of this evening didn´t have an easy time either – maybe two dozen people had gathered in front of the stage, and maybe another dozen in the bar area. And it seemed they were keeping their energy for the headliner – yet thanks to their “fan club” that enthusiastically cheered also from the balcony, MyGrain might be able to remember this one as successful show. Unfortunately also the sound was far from perfect, some feedback problems continued pretty much the whole (way too short) show. Setlist: Into the Parallel Universe, Shadow People, Of Immortal Aeons, Darkbound, Plastic, Translucent Dreams, Dust Devils and Cosmic Storms, Trapped in an Hourglass

Audrey Horne
Wow what´s that – let´s try it like this: those Norwegians sounded as if Deep Purple had Mike Patton as vocalist and played Prog-Punk influenced Stoner Rock… There was a lot of posing, fun and action, and even a megaphone was used to enhance this powerful wave of energy emerging from the stage. Sometimes the vocals were slightly off – but no wonder when there´s so much going on. Singer Toschie even ran around amidst the – now slightly bigger – crowd, delivering a new song „Redemption, please“ (or something, not sure if I understood the title correctly). Quite amazing was the audience reaction to that – almost none at all. (KW)

Tyr
are a rare sight in Finland, the presumed reasons for this being logistics rather than lack of popularity. Their only previous visit at Tuska 2008 had been one of that festival´s highlights, so expectations were running high again. However, the gig turned out to be a bit of a letdown in comparison to three years ago, as the setlist was built almost exclusively around the two latest albums, which simply aren´t as well known here as the earlier ones. To my dismay, not a single song was sung in Faroese. The announcement “we have many songs about hammers…” towards the end of the set clearly revived the audience, but the disappointment was tangible when singer Heri continued, “this one´s called ´Hold The Heathen Hammer High´!” As tired as they probably are of it, maybe next time they really ought to do their much-neglected Finnish fans a favor and dig out “Hail To The Hammer” instead. And whenever that next time may be, let´s hope guitarist Terji´s hair will have grown back by then.

Moonsorrow
If Týr didn´t feel inclined to do old songs, Moonsorrow took the opposite strategy. Aware that probably the majority of local fans had seen one or more of the shows promoting this year´s album, the band had decided to come up with a well-assorted bundle of surprises from the past. Coolest of them was the idea of framing ´Raunioilla´ and ´Kylän päässä´ with parts of the magnum epos ´Tulimyrsky´. The crowd – by this time the use of the term was finally justified -moshed in gratitude, and I´m willing to call it one of the best Moonsorrow gigs I have seen. Not meaning to say their new album is any worse than the earlier ones, much to the contrary, and neither was it completely omitted from the set: ´Tähdetön´ was featured as well as ´Kuolleiden maa´. The latter is as definitive an ending as any and of course the band left the stage after it, but late as it was, nobody seemed willing to leave yet and in the end the lasting applause was rewarded with one more classic, ´Sankaritarina´. (TS) 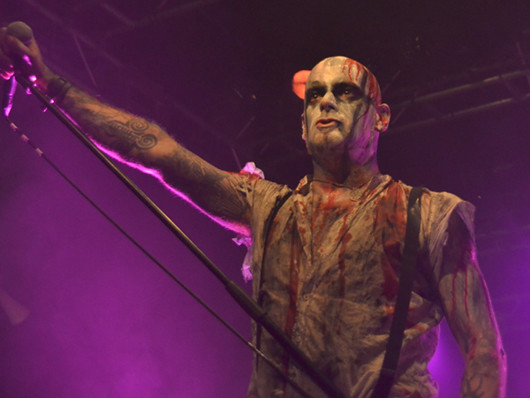 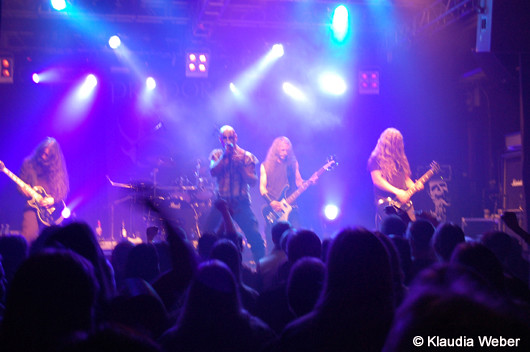 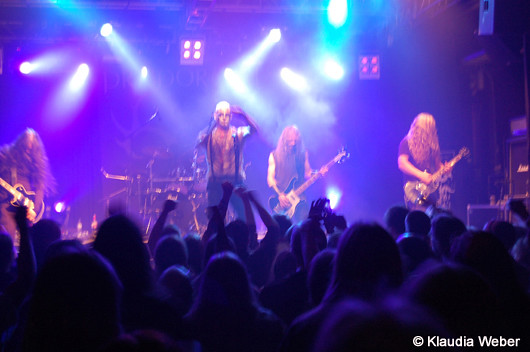 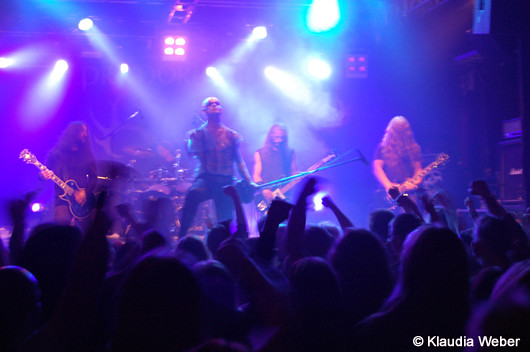 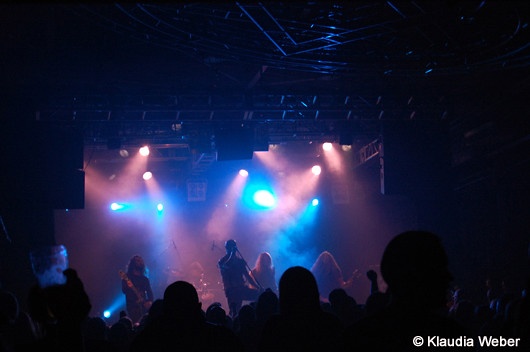 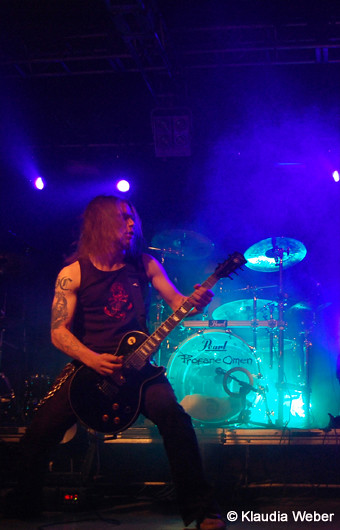 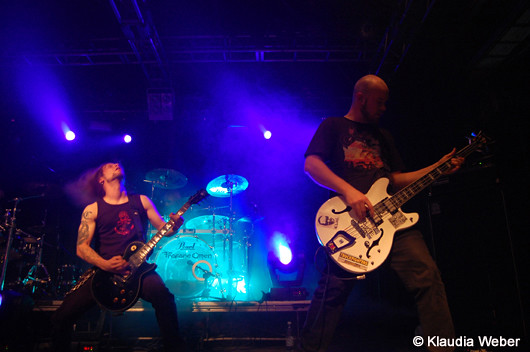 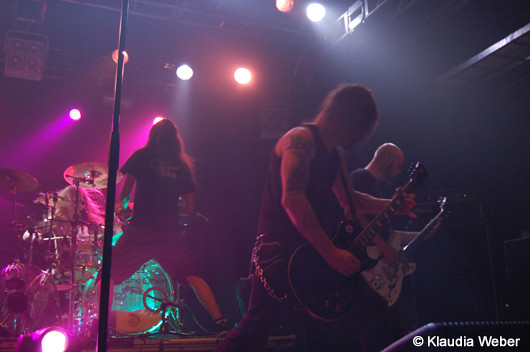 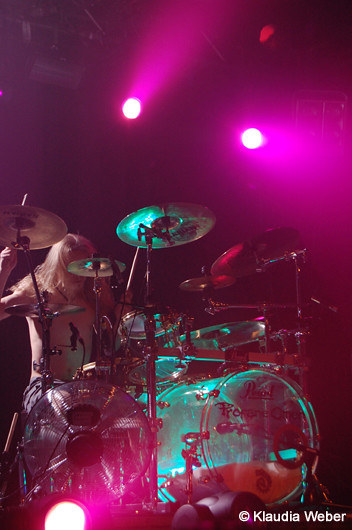 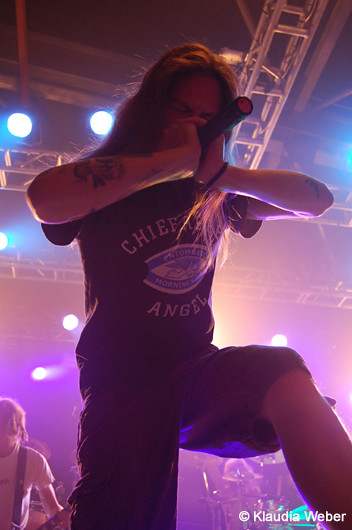 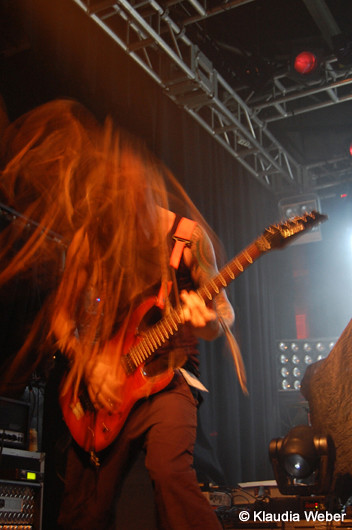 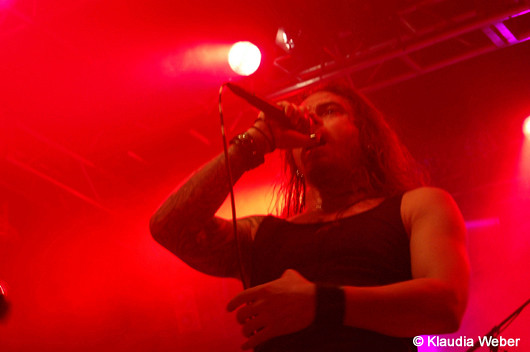 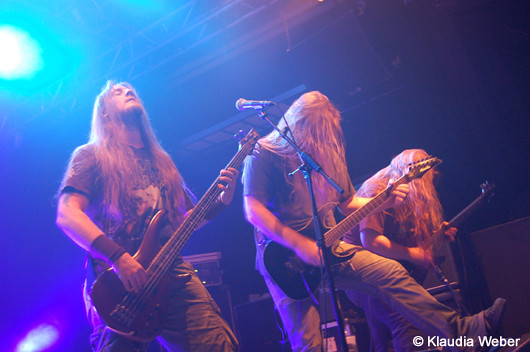 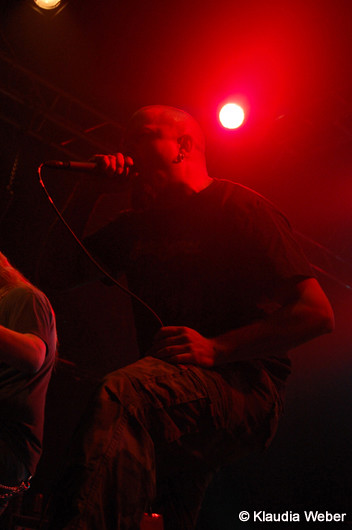 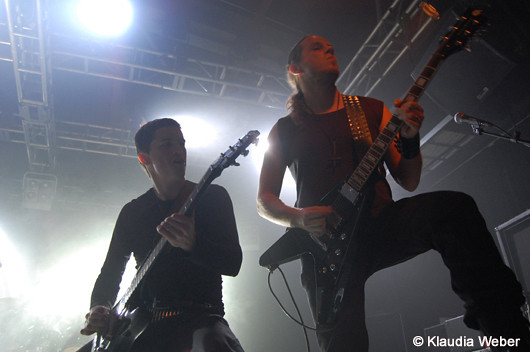 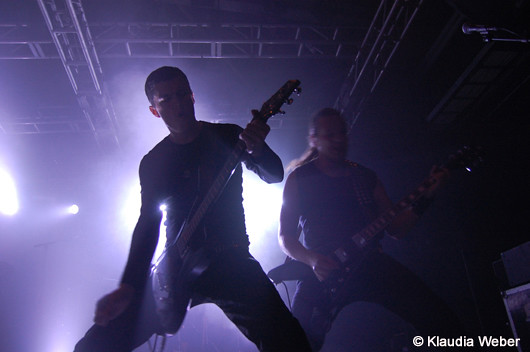 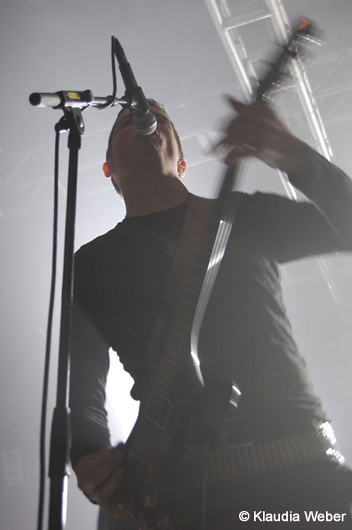 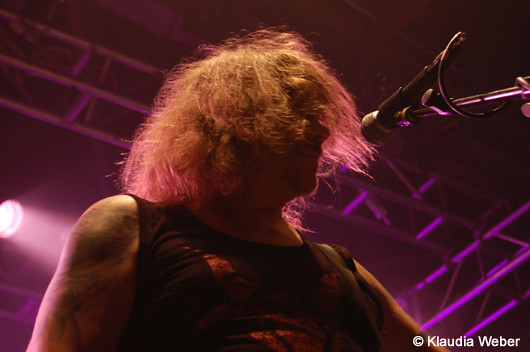 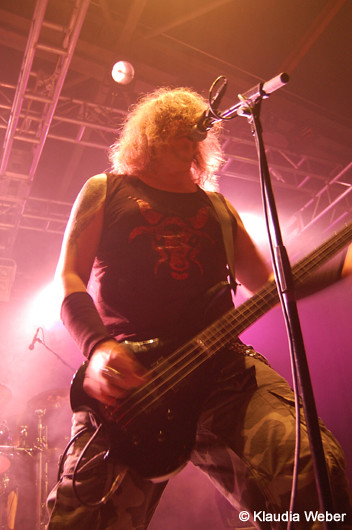 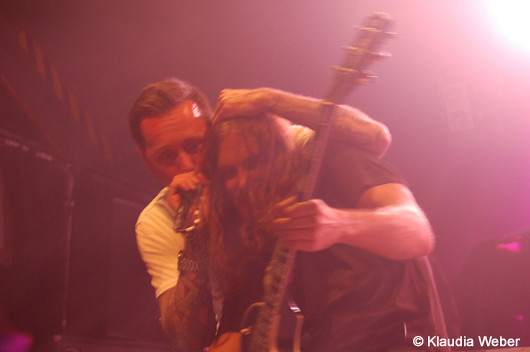 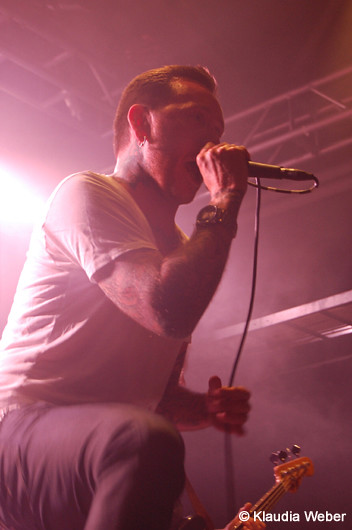 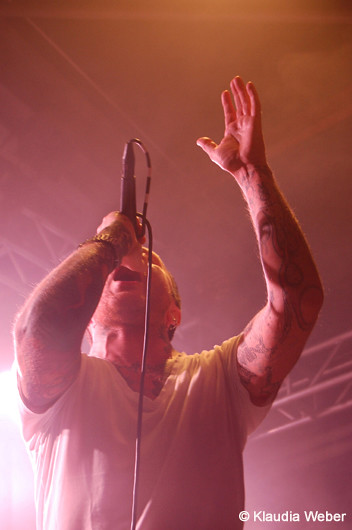 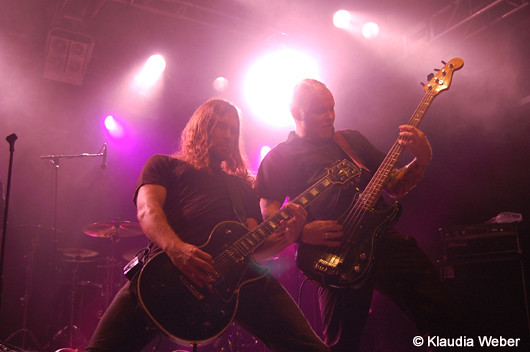 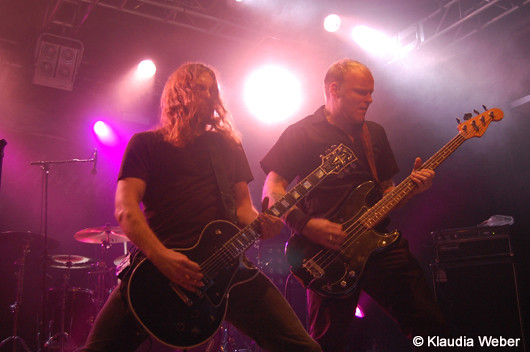 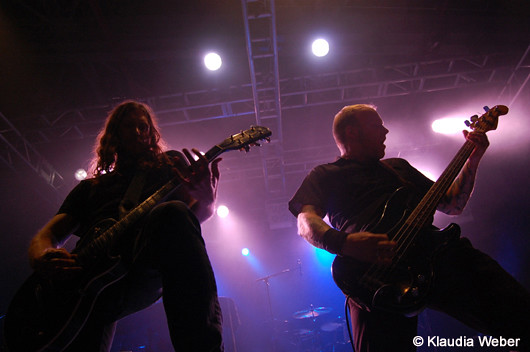 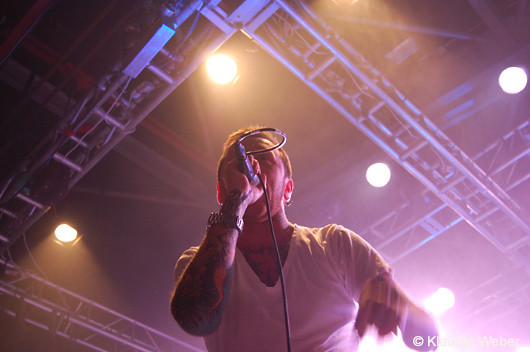 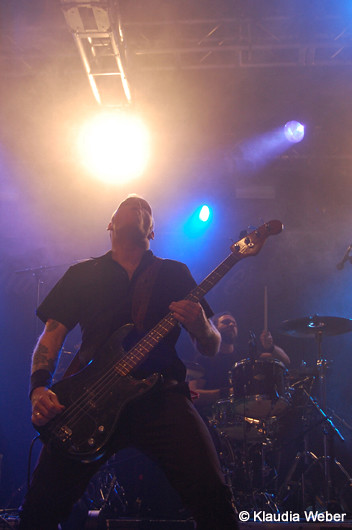 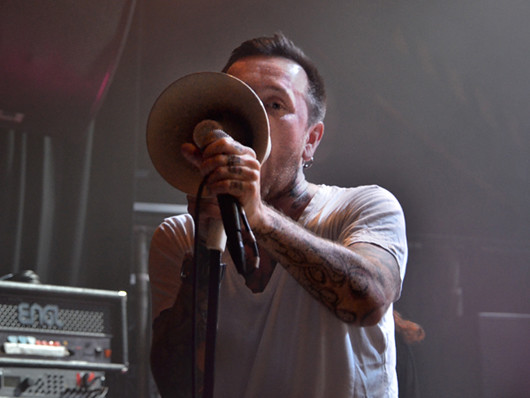 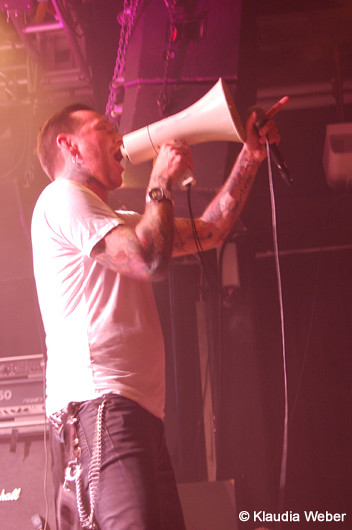 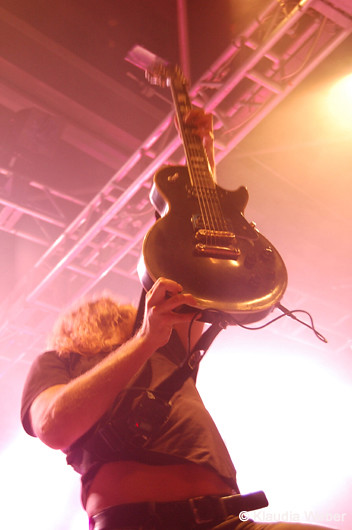 Saturday Oct 29, 2011
surprised with even less audience attention in the beginning, perhaps only 2-3 dozen in the whole club – which means that Nosturi appeared to be totally empty.

Hateform
filled in for Dead Congregation in Helsinki (in Oulu: Mors Subita) who had cancelled – and they took the situation with good humour and chatted with the audience – which in return cheered gratefully. This classic, grooving Death Metal with a good dose of Blast Beats had deserved some more attention. They played e.g. “Abhorrent Reincarnation” and “There will be none” from their second album Origins Of Plague and their debut album „Videobiisi“ Sky Cries Blood.

Black Crucifixion
If there was an „evil grimace“ competition, those guys had good chances to win. And about twice as many enthusiastic people in front of the stage than the previous band; among them an astonishing number of very young fans. Those enjoyed this Old School Black Metal, with a grain of Doom and rather following the footsteps of Venom than the Norwegian variation that also dominates the new anniversary album “Hope of Retaliation”. I enjoyed to listen to the complex drum work for a while, but otherwise that genre is not my cup of tea.

Profane Omen
had again about twice as many people as their predecessors, therefore also the Saturday evening turned out well in the end. And the level of excitement reached a peak when “Wastehead” kicked off an highly energetic and fantastic show. Hyperactive fronter Jules and his guys cannot deny their Hardcore roots, but the new Destroy! material gives Jules´ versatile voice much more opportunity to shine. The crowd wasn´t as lazy as the previous day and happily cheered, danced and sang along – there was even a „one-woman-moshpit“. The set contained e.g.: A Force To Be Reckoned With, Feed On The Wasted, Predator, Painbox, Escape/Traceless, Disconnected, Base, Bound To Strive

A.R.G.
Old School Trash musically and regarding the outfit (scrubby hair, shabby Jeans, and a t-shirt celebrating long-gone GDR) – those Finnish “old-timers” had played that kind of music already when it was brand new. A high-speed homage to Testament, Destruction, Kreator & Co. and a lesson in brutality for many younger acts… unfortunately also concerning the sound volume. When it got too mushy, I preferred to stay outside the hall – and from a “safe distance” you could actually identify the structure of those songs.

Primordial
A long expected band, their merch sales went well that night – and yes, the club was at least as full as the night before. The audience didn´t need much pumping up celebrate Primordial´s 20th anniversary – allegedly on this very day – everybody gladly cheered and sang along. In between and even during songs (e.g. Lain with the Wolf, The Mouth of Judas, Heathen Tribes and even the ancient demo track To The Ends Of The Earth) singer A.A. Nemtheanga kept on firing up the audience – maybe a bit too often with „Are you with me Helsinki?“ Or were there other reasons for his shouting? In the last 15 min of the set such antics could no longer cover up that voice, lyrics and the man himself appeared more and more out of balance… The band kept playing bravely, even though it got even more out of control – culminating in Nemtheanga´s crowdsurfing during the final song Empire Falls. Still, a great gig – despite this one glass whisky too many … (KW)