A Finnish band is once again the one to be observed by STALKER a bit more closely, during their EU tour at three venues in three different countries (Austria, Germany and Luxembourg) – namely the world´s heaviest Cello ensemble Apocalyptica.

Austria: Wien „Bank Austria“ – Halle Gasometer, 19 Oct 2010
From 8:00 pm. Livingston *– a rock formation from London (GB) – heats up the audience. A few uncertainties in the part of the singer are washed away by highly thrilling music. After only one half hour of pointedly moderation and amazing songs (everything from ballads to hard rock) the sound has been turned off for a major changing of the set for the main act. Through their likeable appearence and catchy tunes, Livingston were surely able to win a lot of new fans.

A suitable support of the whole concert by the light technicians has been given. The timing of the light effects and the colour tunings fit perfectly into the sound.

The opening of the Finns Apocalyptica is reinforced by dramatical light changes and the band has put on their best performance clothing. Fog machines take away the shapes of the stage setting and help the audience to dive deeper into a world of sound and poetry.

The concert has been split up into topics, something of this and a little bit of that, a small part from everything: pieces from their latest album „the seventh symphony“, songs with their singer, a few of their old and famous Metallica – coversongs as “Master of Puppets“, where the audience has got praise for their singing abilities.

In one moment, Eicca Toppinen (Cello) and Mikko Sirén (Drums) have a wild chase, in the next moment the musicians lead a musical conversation with each other, then Lötjönen fascinates the audience in the front rows with his nearly interactive performance, Kivilaasko tries to smalltalk in German and curses in finnish.
Toppinens cello bow flies after a drum duo part, which it was surely not made for, damaged into the masses of the listeners in the end of the concert, shortly after that, Sirén also throws his used drumsticks to the audience.
The fans throw themselves enthusiastically into the pogo. And after a little bit less than two hours (with additions) the audience lurches out of the concert hall.

We think, that it was a pretty cool concert with high quality music and exciting temper modulations but with petty and fake appearing moderations and comments during the main act.
The ear protection was greatly not enough to protect our ears. No matter if the sound technics, the event management or the band itself has been responsible for this, they did nothing good to the quality of the sound and the music; a lot of fascinating aspects of the pieces have been buried under the crying of the boxes and the pulse of the sub basses.
Noise is relativ, the pain barrier is absolute. That for we give seven out of ten points for this event.

At least there is one live track from Livingston for free download, check out the homepages for more details:

Germany: Hamburg, Grosse Freiheit 36, 23 Oct 2010
Lights were perfect, sound was perfect, support act was nice, Apocalyptica was awesome. The only real minus you can give is to the support and the singer (Tipe Johnson), whom the cellists took with them on tour. He isn’t bad, but just couldn’t hold a candle to the original vocalists.

The warm-up band, Livingston, has a very international line-up: South Africa, Germany, Italy and U.K. Musically they are okay, despite their very pop sound. The band holds a lot of similarities with Rust and thus lies somewhere between Cold Play and Linkin Park. In one of the songs the whole band plays drums, bringing in some Blue-Man-Group vibes. If you have interest in the previously mentioned bands, it’s definitely worth looking into.

Apocalyptica started off with a few oldies. First a few Metallica tracks and then the singer came on stage for “Bring them to the Light” and “I’m not Jesus.” In both of the tracks he performed well, but the fact remains that he pales in comparison to vocalists like Corey Taylor. It was very nice to see that the track “Bring them to the Light” worked live awesomely; the pure power within the song itself takes over and does nothing but kicks ass.

All of the band members are really good entertainers. Armed with an exceptionally dry humour and poor German pronouncement, they didn’t just send ripples of laughter around the hall, but the people exploded into laughter every once in a while. The audience was living along with the concert the whole time; when Apocalyptica played instrumentally, audience added their own voices to the performance. It was obvious to see that the cellists were having a lot of fun on stage; Eicca was joking around, Paavo’s smile went from ear to ear and Perttu couldn’t stop fucking around. Even Mikko, the drummer, didn’t seem to be nervous at all, not even when he was called to play the cello in “Beautiful.”

All in all they played 90 minutes, which included a lot of old and new material, three encores -last of which was “Hall of the Mountain King”. One could hardly ask for more, even though nobody wouldn’t have had anything against them playing a bit longer.

Den Atelier, Luxembourg City, Nov 5, 2010
I´ve been listening to those guys from almost the very beginning and back then, it happened more often than not, that people asked „Apo who?!“, when you said, you were going to a gig of the Finns. Nowadays however, things have change dramatically – I´d say by now even my grandma knows who they are. „Oh those longhaired Finnish dudes with the cellos that play Metallica, yeah I´ve heard their stuff somewhere!“.
This proved to be impressingly true at Den Atelier directly in Luxemburg city. Not only was the venue sold out for quite a while already (since early September as I was told by a colleague), but also was the audience more mixed than ever – it was almost hard to spot metalheads, or let´s say it like this, those who looked like metalheads, judging from their outfits. You got people of every age, even whole families with younger children, everybody was there! In a way I really wondered, why they hadn´t moved the show from this rather small venue to the way bigger Rockhal, but in the end it was a great thing, to see this band in a more cosy atmosphere. Somehow it felt a bit like being back in 2003, where I saw them in a similarly small venue in France. A photopit, that wasn´t really worth mentioning was a bit annoying for photographing, but else it made it possible to almost grab the musicians on stage.

So the opening act was the London outfit Livingston – I have to admit I never heard of those guys before, but I think they got a new fan right with the very first song! Ok, not only one, after the first two songs, „Smile“ and „6×4“ the audience really seemed to get into the music and clapped and screamed – something you definitely don´t see/hear often in Luxemburg, least of all during the support band! At the latest when „Disease“ was being played and Eicca and Mikko from Apocalyptica joined the guys on stage for a pretty cool drum“solo“ interlude, the fans went off the rails. Eicca on drums and Mikko on an additional drum and everybody seemed to enjoy this drum session. Two more songs were left and with some sadness in their voices Livingston announced, that this was unfortunately the last day on tour and the last day with Apocalyptica. I´m quite sure, that they convinced a lot of Apocalyptica fans during the tour with their balanced mix of driving hard rocking songs and softer ballads and their charismatic stageacting.
Great sound, that´s worth being checked out. While it already sounds good on CD, I can assure you, this material definitely kicks more ass live!

After that there was a changeover of about 30 minutes and the temperatures in the sold out Den Atelier were rising. Thank god for a working aircondition, else the Finns would´ve been able to enjoy a nice Luxemburgian sauna! 9:30pm sharp they entered stage and started with two new songs „Quasimodo“ and „2010“, followed by „Grace“ from the „Worlds Collide“ album. Fans were warmed up already in the truest sense of the word, so Apocalyptica had a walk-over. With the following „Master of Puppets“ there was no holding back, the audience was singing along and in high spirits and so was the band. After all it was the last gig of the tour. For the next two songs they had Tipe Johnson as vocalist on stage again, who was singing „End Of Me“ and „I´m not Jesus“. Eicca was doing background vocals to those songs. „Refuse/Resist“ definitely marked the wildest part of the gig, with one part of the audience going berserk and the Livingston guys joining Apocalyptica on stage shredding their guitars and basses, sometimes even with a cello bow. Perttu´s introduction of the band that sounded more like a little interview, took an almost comical turn and made everybody laugh. By now every member of the band has really turned into an entertainer.

Just as if they wanted to give the audience a chance to cool down they played the wonderful calmer songs „Beautiful“ and „Sacra“, where almost everyone was looking and listening like hypnotised.
After a few more songs things started to get a wilder again and „Seek´n Destroy“ demanded loud sing-along by the fans again. Too bad, that „Inquisition Symphony“ already marked the „official end“ of the gig, but since the whole venue started screaming for an encore, before Apocalyptica had even left stage, they had no other choice than coming back and firing three more songs into the crowd. Tipe joined them one last time and sang „I Don´t Care“ and „Hall of the Mountain“ was the traditional very last song.
The very last song of this evening and also the very last song of this tour!
Great! Apocalyptica had once again delivered a flawless and very entertaining gig!

More photos here
Setlist Apocalyptica:
On The Rooftop with Quasimodo
2010
Grace
Master of Puppets
End Of Me
I´m Not Jesus
Refuse/Resist
Beautiful
Sacra
Bittersweet
Last Hope
Bring Them To Light
Seek´n Destroy
Inquisition Symphony
At The Gates of Manala
I Don´t Care
Hall of the Mountain King 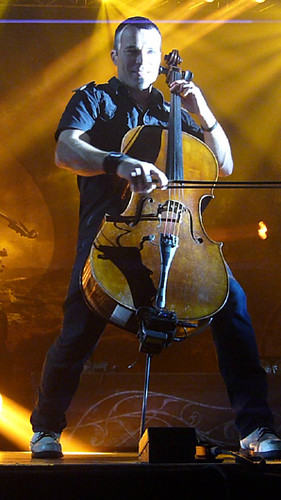 Turmion Kätilöt and the 7 Deadly Sins