With his charming naivety of an innocent little boy, Jonas talks of the 7 deadly sins simply in terms of a “good” or a “bad” thing, just as simple and straightforward, as most Katatonia’s lyrics are.

Gluttony
Ok. I don’t know, I guess it’s a health thing to a lot of people and… I don’t know, I’ve not thought about it so much, but I like cooking, yeah…

Sloth
I’m kind of lazy myself, but of course if there’s something serious, you should take it serious. I can be kind of annoyed with people who are lazy, so this one isn’t a good thing.

Wrath
I don’t know, I myself don’t get angry very often, I think people with aggression should try to cool down.

Vanity
That’s being vain, is it? This isn’t my kind of thing either. I think it’s very common in today’s society, people are so obsessed with themselves, making a career, very often on behalf of stepping onto other people, which is of course a bad thing.

Lust
I don’t think that’s a sin, (laughs) it’s not that bad…

Greed
Greed is very common in the music industry, you have to face it daily. If you come to a certain position with your band or whatever, you realise there are a lot of leeches that wants to make money out of you, which is something you have to create some kind of radar for, where you can see whether people are honest or greedy when it comes to approaching you, so it’s difficult issue for us as a band. As for myself, I guess I am greedy for something, but subconsciously. I think I’m pretty down to earth and I’m usually very happy with what I have, the basic things that makes me happy: healthy family and stuff like that. I don’t think so much about possessions, etc. But of course probably somewhere at the back of my head I’ve some greed as well and I think that’s human behaviour.

Envy
Yeah. I think that’s a sad thing to see, when people are envious and you realise it, if there’s someone that are not masking it well, it shines through, which makes it very tense to be around someone. If someone is envying me, you know, for some reason, I think that’s a difficult atmosphere to handle. Of course being a human, I can also be envious of other people, but I think you should approach people with a nice attitude instead of letting your envy shine through, because it’s really difficult to handle when you realise this somebody wants to have something that you already have. 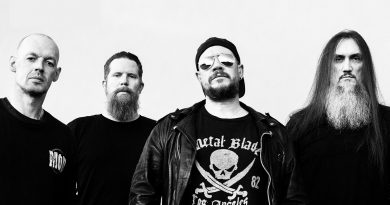 Los Bastardos Finlandeses: “Rock music stays with you for life”