Time has come for another Ruisrock festival on Ruissalo Island outside the Finnish city Turku. Every year a huge number of rock fans head towards the natural park on Ruissalo to celebrate the summer in the beautiful Finnish nature right at the seaside, enjoying good music. Treating the natural park with care and in order to avoid extra trash you are only allowed to drink alcohol in divided beer areas (age limit 18) at the festival site. But this doesn`t do harm, as those have a comfortable “biergarten”- flair and you can still follow the bands from there. A clean festival site surely pays off for everybody, but you are really amazed about the environmental consciousness of Finnish festival visitors: nobody just drops his trash on the ground or takes a piss right on the path. These things turn the Ruisrock into a very comfortable festival, which you can enjoy to the fullest. Food and alcohol are very expensive, but hey – that’s Finland. There are four stages spread all over the festival area, one main stage, one tent stage, one pavilion stage and one beach stage. All funsters can let off steam at various attractions, like karaoke and guitar heroes contests, bungee jumping, sumo wrestling in padded suits, a circus and many more. Somehow the Ruisrock is something very special, I definitely recommend it!

ENSIFERUM, orange stage
The finish viking- to folk metalheads are nice to look at and listen to, just as usual. The guys have an overall positive charisma and it´s simply great fun with those northmen wearing Finnish flags as skirts.

Let´s talk about the first highlight of this years` Ruisrock festival – Amorphis! You guessed it right, it`s another promising band from Finland, now there´s progressive- deathmetal on the menu. Those who already know and love the band – according to the number of visitors those are many – have surely never experienced the band like this. This gig was a masterstroke! Thumbs up!

PORCUPINE TREE, green stage
Although praised highly in the Finnish press, the Brits didn`t conquer my heart. Despite my great expectations I even got bored quite fast, that`s nothing you didn`t hear before, simply normal progressive rock!

THE SOUNDS, yellow stage
For a change there is a Swedish Indierock band with a hot front girl. For most visitors Maja Ivarssons hotpants + highheels will be connected inseparably with the Ruisrock 2008. The blond wildcat catches her audience effortlessly, her you can even see Finnish people singing and dancing along!

The first time for me to see the band with the new frontgirl, and I have to say that I like Nightwish a lot better this way. You can see the newly gained companionship and it`s great fun to experience their joy to play. Anette Olzon´s charisma adds a new facet to the band and also the audience already adopted her completely. There`s nothing negative to say, great show!

MINISTRY, orange stage
Organizer Juhani Merimaa gave us a difficult choice, Nightwish or Ministry? In the case of taking photos I decided for Nightwish, so I only saw the end of the Ministry gig. In my opinion Ministry won the race, as there was no space left in front of the stage, it was full of frenetically celebrating people. Standing still was very hard, this was kick ass at it`s best!

Saturday, July 5, 2008
LAPKO, yellow stage
That`s a nice beginning of the day! Lapko definitely belong to my most intense Ruisrock memories, the alternative rockers from Helsinki reach for your hearts, metaphorically speaking. You simply have to like these rascals! Charming to heartbreaking, you want to take singer Malja down the stage at the latest at „Dead Disco“ and the text line „I want to be loved!“ and hug him.

JIPPU, blue stage
Haha, this was funny! Attention for Finnish pop music a la Christina Agiulera with a giant Choir on stage. Seems like there have been more people on than in front of the stage, the classic case of being at the wrong time in the wrong place!

This is the solo project of Maj Karma singer Herra Ylppö, you listen to a mixture of Indierock and New Wave with Finnish lyrics. Everybody who`s fond of dark rock will get his money worth with this band!

POETS OF THE FALL, blue stage
Well, opinions are divided on this one. Indeed they are Finns, but you sadly won`t hear it. They call this independent rock, but it`s not independent at all. The guys try to be very American, but unfortunately not very convincing.

DISCO ENSEMBLE, green stage
That`s called Post- Hardcore? Very interesting and really crazy, but that full of energy you first won`t be able to shut your mouth again. Surely not everybodys` taste, but definitely worth to listen to!

OPETH, blue stage
Just like you expect, Opeth did a very convincing job again. To me it`s everytime again a pleasure to listen to those modest Swedes, you simply feel good. Good metal entertainment!

Now that`s the ultimate delicacy, there my music heart does a few more jumps. The 69 eyes are a guaranteed kick- ass rock experience, here nobody will be distracted! The five brought us one of the most magic moments at this years` Ruisrock festival as they played the The Doors classic „LA woman“. Nothing more to wish for left!

Absolutely insane! Singer Michael Monroe seems uncapable to stand still for one second, he is speeding from the one to the other side of the stage like a tornado, climbs up the light frame at least ten meters and sings his heavy- glamrock songs hanging on only one hand and stretching out both of his feet towards the amazed audience. This attracts the attention of Ruisrock frequenter Bam Margera, who enters the stage filming, what seems to speed Micheal even more. Quite a breakneck entertainment, but though somehow impressive!

THE ARK, green stage
Is it Jesus standing on the stage over there? Since singer Ola Salo plays the role of Jesus in the musical Jesus Christ Superstar, he seems to have problems with his self definition. Nothing against the ark, the music is really nice, but Ola gives us a quite hard time to enjoy the concert openly with his viewer communication in sermon style and as he various times announces a very ominous declaration of independence. That`s a shame, really…

Now it`s time for something very special! Again a band the Finns can rightly be very proud of. Von Hertzen Brothers are in the top ten of the Finnish charts for good reasons. In my opinion this was the most atmospheric concert of this years` Ruisrock, these guys are magic! Mother, father and children, fans of all ages get excited about this band, so please hurry up and come to Germany!

Hm, i can`t be objective on this one, they always convince me! Some may say they repeat themselves and at every concert pretty much the same happens, meaning you wouldn`t really miss much. To me this is complete nonsense, Ville still is unbeatable even in a very harmless coca cola flush! Like you would expect, Bam Margera appeared again on stage and when he with his camera gets too close to Ville, the singer kicks him right away, well done! But Bam sure is right in one point: HIM are the best band ever!

TERÄSBETONI, green stage
Hey, look, those metalheads have humour! Teräsbetoni did this years` Eurovision Songcontest song „Missä miehet ratsastaa“ (where the brave men go riding!?) for Finland. The guys don`t take themselves and their music too seriously, it`s refreshing to watch a metal band which doesn`t try to be oh so very bad!

ISMO ALANKO TEHOLLA, blue stage
Wow, what`s wrong now? Everything Finnish meets in front of the blue stage. Seems like everybody knows the lyrics by heart, because they sing along as if it would be the Finnish anthem! Ismo attracts Finns of all age, some only came for this concert. Somebody told me later, that he is the Finnish poet per se, his lyrics and the at times kind of shamanic music didn`t fail its effect. Shame, that you won`t be able to understand all of it, when Finish is not your mother tongue.

ASA JA JÄTKÄJATKÄT, orange stage
Ok, we`ve learned that Finnish reggae is quite nice to listen to, but when they start to rap in finish it`s getting close to being painful! Absolutely tedious!

BULLET FOR MY VALENTINE, blue stage

Now we come to what all the little girls have paid for, Bullet For my Valentine are up next. Again a band, which wants to be American. Surprise, these guys are from Great Britain! Very American they first declare the audience to be the best during the whole tour and the Teenies even try to do a circlepit, which doesn´t really work. But I have to admit that they have been very loud!

APULANTA, orange stage
Is that Finnish punk music? My quick glance didn`t really form an opinion, must have been not too impressive…

KENT, green stage
Again a new version, now we see melodic rock with Swedish lyrics. You could think that this may cause mixed feelings in some proud Finns, but far from that! The Swedes meet a very benevolent to enthused audience. One question remains: why did they hide the stage behind a giant black sheet? For a great surprise you waited in vain, a safety measure maybe?

Four celli + drums = Metalpower of the special kind! I would say that Apocalyptica should be on the “to do list” of everybody who is into heavy music. I can`t think of anything you could dislike about it, just think of blasts like the Metallica Cover „Enter Sandman“ or the Rammstein Cover „Seemann“ as well as ballads like „Bittersweet“. They were very loud as well!

TURISAS, orange stage
Many young Viking warriors painted black and red meet in front of the stage. This picture causes curiosity, and as the band started playing you are convinced to join them quite fast. This tastes like more!

Interpol are a Post- Punk Band from New York whom everybody but me seems to know already – embarrassing! I don`t know what it is but there is something about them. We partied with them and danced until we were totally exhausted, a perfect ending for this Ruisrock! 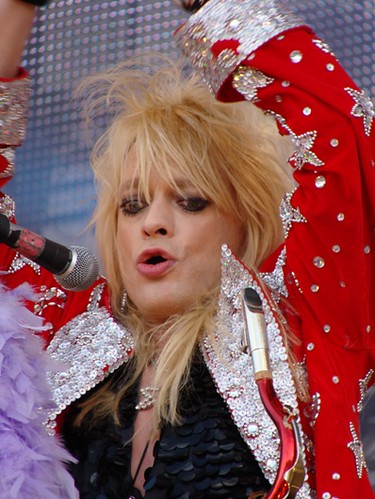