It´s clear that such an “old hand” in the Metal scene has a lot of experience with seven deadly sins, and Marco Hietala (Nightwish, Tarot) shares it with us…

Gluttony
Overstuffing yourself… It´s close to greed, but you don´t understand it, you just do it. I´m not so much into food anyway, I can´t cook so well, I can boil some eggs.

Sloth
I can relate with that, I´m lazy (laughs) Of course with sloth you don´t do anything, you don´t have the energy or the drive to do anything, but I still have that, but I have things that I want to do or things that I have to do, so sloth is worse lazy. With bands playing, writing songs, doing the lyrics, everything, you just do it, energy just comes from, from somewhere close to the same place where inspiration comes from.

Vanity
Vanity? Something for the dumb-asses! Vanity is useless… Appreciating yourself is something different to admiring yourself, which is totally different, it´s a lot more extreme.

Lust
Lust, mmm… I still think lust in certain ways, when you´ve a good company for that, might be good. But of course, well… if you do it over, too many different people and relationships, it loses its value.

Wrath
If I wasn´t playing in the heavy metal band, I think I would have that, but now I´ve an outlet for it, so it comes out in the more peaceful and ´safe´ way, you can say. There are a lot of things that make me angry, world politics for example, abundance of things there. For instance we´re gonna be playing in Israel, and building up the wall, shutting down the Palestinians and then there´s the war in the Middle East. It´s an American thing, it´s the money thing, it´s about people who rule and can decide how and what should be done. When you play in the States, you do it for the people from the streets, who like your band and take your music, I´ve met those people, they´re all the same around the world, although of course different cultures and so on, different languages, but anybody anywhere pretty much wants similar things: make a living, have food on the table, roof over the head, some decent clothes. What I mean with the political things, they bother me the most.

Envy
This is something that I suffer from mostly, but I usually know when it hits, so I usually try to get above it. Envious of the good position in somebody´s band maybe… (laughs), but not lately! I´m pretty much ok now, with people, with good relationships, but when you´re lonely you get envious of things. Any kind of life that you lead, you get some trouble anyway. Basically what it means to be in a successful band is that you have security, you can actually pay the rents for you house and the kids are safe, so my life isn´t perfect, but it´s good, it´s ok now.
Author: Marina Sidyakina, transl. K. Weber, photos: Saila Haapanen 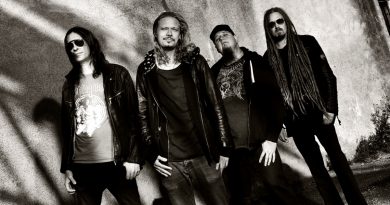 Flat Earth: Around the world

SoundWitch: As we change so does our perception of the world