Be prepared to discover that Finnish summer festivals have their name for a reason… and take it as a useful advice how to prepare for it clothing-wise. That means e. g. “Sauna Open Air” = as little as possible. For Myötätuuli (= tail wind) Rockfestival therefore you should not forget a wind-proof jacket, because although close to mid-summer sun sets only about 21:30, after that it could suddenly become very uncomfortable and chilly…

Otherwise Finland tourists should indeed include MTR in Vantaa in their schedule, because the festival is easy and comfortable to reach from Helsinki center by commuter bus. Small and nice in a well arranged area, it was founded 11 years ago as “Bikini Summer Event” and focuses on Finnish bands and became a 2-day-festival in 2003. 2006 they broke all visitor records, when Lordi played there (10.000 people). This year for the first time MTR had two stages, which meant an easier job for the organisers. And you have a chance to see every band because they don´t play at the same time. If you are lucky you can even meet Metal celebrities in the audience, e. g. Apocalyptica´s Eicca.

Saturday, June 16, 2007
Machine Men
The guys from Machine Men tuned us into the festival, entering stage as the first band and indeed warming up the crowd that had already gathered. One hit was followed by the next, from the new CD „Circus Of Fools“ ( No Talk Without The Giant, Ghost Of The Seasons, The Shadow Gallery) but also from older albums. The weather became better and better, and finally we could see singer Antony without sun glasses. The few hundred visitors that came to MTR had with Machine Men a perfect start for the festival weekend. (SM)

Ensiferum
The Vikings filled in at short notice for Stam1na, whose drummer still suffers from an injury. A good choice, also indicated by audience chants before the show, and the band managed to keep this high level of excitement throughout their set, despite the early hour. Petri, Markus & Co focused on the hits from the current “Victory Songs” album, e. g. One More Magic Potion, Wanderer and Ahti, where the audience sang the chorus, and right afterwards demanded “Lai Lai Hei” – which was indeed the next song the guys and the girl played. “Iron” was the last song in their set, and Ensiferum means: Always nice to watch!

Blake
The crypt rockers Blake started with their most popular songs „Come Down“ and „Two Way“, uniting new interesting music with an extraordinary voice – and Blake manage to create a unique experience from that. Yet live the band is not that exciting because there is not so much movement on stage. As singer Aaro is also the lead guitar player, it results in four hardly moving statues on stage, who play fucking great music. (SM)

Kotipelto
The angel in Speed Metal heaven above Finland. This man, this voice can hardly be topped. Nobody can sing with such dedication and emotion like Timo Kotipelto, the voice of Stratovarius. With his own band he found the opportunity to express his feelings in his own songs, and a track like „Take Me Away“ comes right from the soul of this meditative Finn. A great concert of Mr. Kotipelto who had here creative support by Thunderstone-drummer Mirka Rantanen and keyboarder Robert Engstrand. (SM)

Mokoma
This act was definitely the hardest one this evening, if not concerning the whole festival. Let´s say it is Old School Bay Area Thrash, like pre-Black Album Metallica (and towards the end of their show Mokoma included a Metallica tribute in a song) plus a bit of Pantera and Rammstein, with Finnish lyrics. Singer Marko Annala, by the way, is currently considered to be one of the best lyric writers of the country… The whole band indeed deserved the cheers afterwards, but the tight schedule did not allow any encores. (KW) 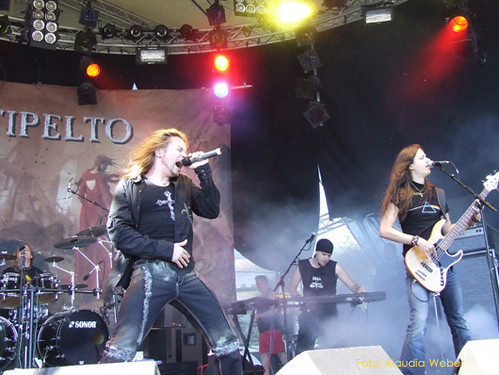 Leverage
For this band there is only one expression: „Tides“, just like the title of their new album, because they came like a Tsunami wave rolling over Finland and conquered the hearts of fans in very short time, and the fact was also obvious on this day. Before even one of them entered stage, the audience shouted the name of singer Pekka Heino, and when they finally gathered, the band played songs like „Superstition“, „Dreamworld“, „Twilight Sinfonie“ and the heart-breaking „Stranger“, which obviously touched singer Pekka. Let´s hope that this band does not come and go like (fashion) waves but has a chance to grow to a big storm. (SM)

Maj Karma
Another Finnish phenomenon with Pop/Rockstar status, and after a Clockwork Orange Soundtrack intro they surprised with a rather rough Punk sound. Yet I think that the softer, more melancholic dark Rock is the band´s strong point. Singer Herra Ylppö has quite a lot of charisma, but his voice is more suitable for ballad-like tracks, just like the band´s radio hit “Sodankylä”. (KW)

Poisonblack
Ville Laihiala, ex-Sentenced-fronter, presented us here his own band. Slightly tipsy he entered stage with keyboarder Marco Sneck, drummer Tarmo Kanerva, guitarist Janne Markus and bass player Antti Remes. It was already 21:30 but still bright day when they played the doomy „Rush“ and „Nothing Else Remain“. Ville had some fun with female fans, who adore him indeed: A smile here, a smirk there, but most of the time he kept his eyes closed to focus on the singing – which left much to be desired that day, only towards the end he finally hit the notes. But still the band is always worth seeing. (SM)

Kotiteollisuus
This trio, that always displays a certain „kiss my ass“ attitude, is indeed always fun to watch, too. If I could just understand those lyrics… the Finnish version of Motörhead did not only play dirty snotty Metal but also had a lot of dirty snotty comments. Again they proved to be not only excellent musicians with weird humor, but also professional entertainers. Well, if it just wasn´t just in Finnish… (KW)

Sunday, June 17, 2007
The second festival day surprised and disappointed most with constant rain, which however did not make any difference to truly devoted and passionate Negative fans, who courageously tolerated all weather whims just to secure their front rows before the glam rockers finally took the stage later in the evening. It was not only the evening that was so exciting and promising, but the entire day filled with various bands, known for their handsome lineups: Bleak, Private Line (who are true veterans of the MTR stage) and Carmen Gray. And their performances were not the only chance to see the musicians, as after their sets they gladly came into the audience, gave endless autographs, posed and fooled around before the cameras, and enjoyed themselves, so no one could care less for the weather!

Bleak
We really recommend you to keep an eye on this band, this quality rock, with beautiful vocals and a very charismatic frontman has already many fans (ladies, not surprisingly) charmed in their local scene and is constantly getting more attention from all over else. From the first sight you would not even guess they are Finnish, as the singer has clearly much of American nu-metal attitude taken in, but since it is not so common in the Finnish metal scene, Bleak looks fresh and sounds very solid and confident for a reasonable new-comer. This band is also famous for one of Finland´s most skillful guitarists Mr. Crabby, who´s noticeable from afar for his gorgeous hair, but the handsome-factor of this band is another topic. Music-wise, very emotionally done set would impress anyone, even if you are not well familiar with the band. Last year Bleak recorded soundtrack to a Finnish movie “Jade Warrior”, which is now a favorite live hit as well – “Fate” and from the first chords is sung along word to word by all. The singer´s behavior also keeps the listener captivated the whole time, as he is jumping and kneeling down constantly, a few times even coming right into the crowd, although climbing back on stage was more complicated and the singer almost lost his pants, which mostly female audience seemed not to mind so much, but nonetheless, leaving a very positive impression and many more new listeners seduced!

Negative
No amount of rain can put out those guys´ spirit and moreover, the ecstatic following of their listeners! The show so well polished and so eclectic, presented in MTR´s best lightshow seen during the entire festival, so even if you are not so much into this particular genre or band, it is hard not enjoy their set every time, when it is done with this much positive energy and genuine pleasure. Jonne was ever so playful and active on stage, although not without a pinch of dramatic gestures and facial expressions. Finnish cutest blondie was climbing everywhere possible and blowing kisses into the wet air – it was not possible being closer to the audience, as Jonne was! It feels like now he is acting and looking even younger, as to when they have just started a few years ago. Sir Christus also is blossoming, with a tempting smile and sparkling eyes, mercilessly teasing innocent teens. Christus is becoming more pink with every concert: now to his already hot-pink guitar and candy-pink outfits he also added pink cigarettes! What´s next? And so the girls claimed that “Christus is godly!”, whilst Jonne was throwing already classic for Negative, fresh pink roses into the audience. Roses in the evening rain, accompanied by songs of tragic love stories, so sensually performed and breathless teenagers catching boys´ every blink of an eye – touching to tears, what an innocent and sweet sight! (MS)