Ankkarock (in English: Duck-Rock) is so to say the little sister of Finnish Ruisrock and takes place in a park area in Vantaa, near Helsinki. This year more than 31 000 visitors came to see almost 30 bands on three stages. The weather wasn’t that good all the time but it was lots of fun though. 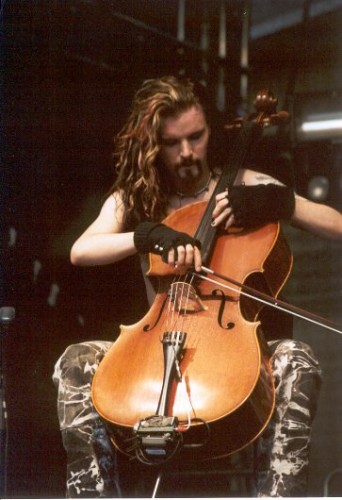 JULIETTE & THE LICKS
This is no one else but the US actress Juliette Lewis. Usually it doesn’t go too well if an actor tries to sing and vice verca. But Juliette is obviously the exception that proves the rule: That girl really kicks ass and knows to fascinate the audience. Even though she is on the set at an ungrateful early time.

Old-rocker Uriah Heep made it to Ankkarock as well. Their hymn ”Lady in Black” still is a well loved classic for old and young; the rest of the show is not really extraordinary.

Those Swedish guys are always welcome guests on Finnish festivals and didn’t want to miss to rock on this one either. Of course they strongly present their latest album ”Rock & Rol is Dead” but also classics ”Toys and Flavors” are not missing.

Now it gets unfair: Two good bands, The Rasmus and Teräsbetoni, are on two different stages at exactly the same time! What to do? No one can split himself, so the solution is to jump here and there, what is not that easy due to the partly quite rough paths in the festival area.

Teräsbetoni (in English: reinforced concrete), the ”Finnish Manowar”, come right away from Germany, where they played at Wacken Open Air. Their songs are mostly about quite cliché subjects, quite macho-like and completely in Finnish but that doesn’t matter at all. Here you get good mood, the crowd is enthusiastic and sings along. Of course we also get to hear the Finnish ”Taivas lyö tulta” (Heaven vomits fire) und ”Orjatar” (female slave) and the metal union bangs their had like hell!

While the majority of the guys and the metalheads hang out at Teräsbetoni’s gig, the ladies melt away with The Rasmus and have secured themselves in time the first rows. But in general the place is bursting. The opener is ”Guilty” and generally the 2003 released album ”Dead Letters” is strongly presented with ”In The Shadows”, ”First Day of my Life” or ”In My Life”. Also concerning new material the audience is not let down: The band presents the three songs (”Shot”, ”Sail Away” and ”No Fear”) of the forthcoming album ”Hide From The Sun”. The crowd thanks it with great enthusiasm. The end of the gig is the melancholic ”Funeral Song” and now the gates around the duck pond close for day one.

Just like at Ruisrock it is unthankful early when Sonata Arctica are playing. Somehting, that this band really doesn’t deserve as Toni Kakko and his men know how to Rock! Also their fans know this and have gathered in front of the stage despite the early hour. Toni knows how to keep the contact to the crowd, animates to sing along and leads them with the microphone stand. The setlist contains mostly songs of ”Reckoning Night” like ”Blinded No More” and ”Shamandalie”. During ”My Land” a short part of Kiss’s ”I Was Made For Loving You” is integrated. Of course the hitlsingle ”Don’t Say A Word” isn’t missing.

Next, glamrockers Hanoi Rocks are playing. Those gentlemen present quite a high speed on stage. But not only there: Singer Mike Monroe jumps to the photo area suddenly and runs around! Nice for the fans but not really for a colleage journalist who doesn’t manage to jump aside in time. He gets run over and ends on the ground. But instead of an excuse he has to face blaming of the singer and his middle finger. Not nice, Mike Monroe, for this we award you with the golden cactus for bad behaviour! Nevertheless the rest of the concert was packed with good mood and good songs like ”Back In Yer Face” and ”Better High” from the current release ”Another Hostile Takeover” as well as ”High School”, ”Delirious” and ”A Day Late, A Dollar Short”.

Within Temptation seem to like it a lot these days in Finland as Ankkarock is already the second Finish festival this year where the Dutch can be found. ”Mitä kuuluu?” (how are you?) asks Sharon the crowd after the opener ”See Who I Am” which answers with enthusiastic screams. Once again Within Temptation got their overwhelming stage decoration with them, two giant angles and also the towers with the elb-writings. Sharon looks like a gothic fairy in her black dress with corset and tulle. It goes on with ”Stand My Ground”, the wonderful ballad ”Angels” and ”Memories”. The concert is accompanied by a really impressive pyro show which is harmonized very well to the songs and their respective mood. The cover of Kate Bush’s ”Running Up That Hill” surprises for it is not so much Within Temptation-like, but anyway well done. At the end of the gig there is a surprise for the band: gold for their album ”Silent Force”. Finland is thus the first country in Scandinavia where the band receives an album award. Congratulations!

Also without vocals and in the beginning ”just” sitting on their chairs Apocalyptica manage it easily to put the audience under their ban and create an almost mystic atmosphere. This is intensified by the light and smoke effects. The set consists partially of Metallica covers like ”Master of Puppets” or ”Seek and Distroy” and then of all the well-known hits: ”Path”, ”Somewhere around Nothing”, ”Hope”, ”How Far” and the two hitsinlges ”Life Burns” and ”Bittersweet” for example. The gentlemen Ville Valo and Lauri Ylönen don’t show up but the audience knows how to ”replace” them. The complete song is sung along and even the different pitches are considered!

Already an hour before the band is on stage the space before it is bursting. No wonder, when considering that Nightwish completely sold out the Arena in Helsinki in less then one hour. Once again ”Dark Chest of Wonders” is the opener accompanied by pyro explosions. Tarja talks to the audience and says that it is nice to play finally at home again – the band has been on a world tour for almost one and a half years! For this home match even more goodies are produced: classics like ”Wishmaster” and the obviously hardest song of the band, ”Slayin The Dreamer” endangering your neck by headbanging too hard and the ten-minute-song ”Ghost Love Score”. Then the rest of the band leaves the stage, only Tarja stays, saying: ”Why only the singer stays on stage? To sing you a song!” And then really sentimental mood comes up:”Kuolema Tekee Taiteilijan” (Death makes an artist), the Finnish ballad from the album ”Once”! The encore is ”Wish I had An Angel” followed by grandiose fireworks.

And so Ankkarock ends for this year. See you again in 2006!

Halestorm:“It´s never been more clear what I like and what I know that I am”