It’s always hard to get started – this might be the motto of the first ever Geek Days. It is definitely not easy to organize a Geek event in small Switzerland amidst big events like Fantasy in Basel, Genfer Gaming Convention, Unicon Zug or Game Show Zürich. As Geek events are trendy, the organizer Duptap probably assumed it’s easily attracting people. Unfortunately online promotion was slow, the website did neither present the program properly nor the directions. When we arrived at Zofingen station, there was no sign for the event and even right at Mehrzweckhalle no signs pointed to the Geek Days. Yet there was a nice parking space right outside the hall, which would not have been sufficient for an onrush of audience.
Outside the hall there were some food stands, e.g. for Japanese food and we enjoyed Ongiri from the Wakara Kaarage Food Truck, which was excellent. At the entrance – the problem with my press accreditation was solved quickly – my colleague purchased a 30.- CHF sponsor ticket including a goodie bag (normal ticket prices were 10.- per day, 15,- for the weekend). The goodie bag contained promo material and in multiple copies – why 5 times the same flyer? – and maybe some Geek Day souvenir would have been a nice idea, or a coupon for next year’s Geek Days ticket.

In the hall a bad surprise – it was quite empty, stand- and audience-wise; maybe making the space appear smaller and more attractive (room divisiders, a fence with posters or the like) would have been a good idea. The hall had been opened at 10 and we got there by 15 h, still not many people attending. Very frustrating for organizers and for those who paid the stand fees.
Photo gallery below!

The stands were pretty interesting, though, besides those E-Sports Team and Pokémon-, Magic & Yu-Gi-Oh Karten players there were a lot of Creators to discover. People who have their own ideas and create handicraft for sale, on paper, as Fimo, in plush or other versions. FimoByTwins presented their FimoFigures and Pixelart, Shantro Inventor Art his unique artwork, Nickel Kyllacuren their sweet drawings in various styles, Dakimakura sell Anime character cushions, motives from innocent to sexy and you can even design your own … I was also impressed by the Wonderlust Emporium jewelry, very beautiful ideas for every occasion, the work of Natascha Ratzlaff has everything that glitters and shines. Naturally organizations like Geek Society,  Gallactic Alliance or 501st Legion Swiss Garrison are not missing such event.

In the hall there could be more seating-accommodation or tables, or at least announce that people can sit on the stage. And the entrance/exit area would have been a better spot for the drink stand, easier to find, and maybe a special non-alcoholic Geek Days drink would be an idea for the evening. I cannot say much about the work shops and the stage drew attention first when several people attended a dance contest. The Karaoke afterwards was a great idea that worked well, this should be part of the next program too.

Honestly, had I not waited for the band Aural Coma, I would have left around 17 h and unfortunately they played at  20:45 h in front of even less audience. In such a case the organizers should have put on the gig much earlier. Waiting for the band was 100% worth it and although there were not so many people any more, the band gave  300%. The highlight of the Geek Days.

As mentioned, it’s difficult to start something new and for the planning of the next event the organizers require feedback. The basic idea of this event is being a platform for Creators, and I would give Geek Days another chance, provided that some issues will be improved. Good luck and I hope the next Geek Days will be a success! 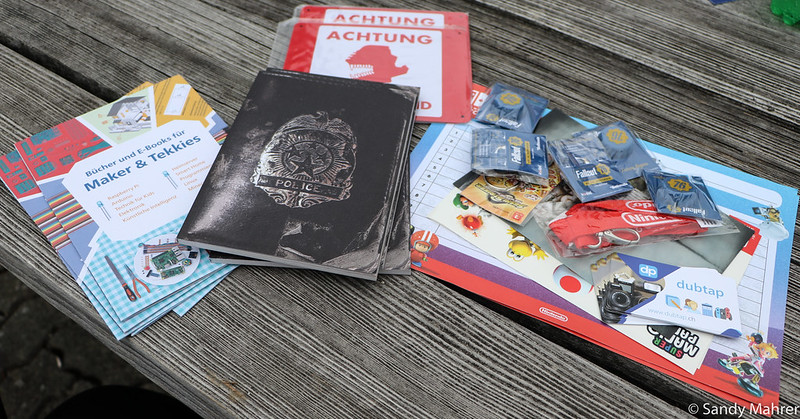