They have been one of Sweden’s Sleaze Rock wonders whose future looked very bright, but unfortunately sometimes things don’t turn out as you wish them to be. In the past years it got very quiet around Pretty Wild, their last album was released in 2014, the last video in 2016. But Pretty Wild have been working in the background on a new album with a new spirit and new power, and one thing is for sure – they will be back with a bang.

Hi Axl, thank you very much for taking the time to answer our questions. Can you tell us first how you will spend the holiday season? Are there any Swedish traditions you personally do as well in your family?
Well hello!
I´ve been busy on the holidays the last few years due to work/music, so the celebration has gotten a bit ”forgotten” if you will. Usually I meet up with my family on a day when everyone got time. Then we eat, exchanging presents and so on. I guess the food is a bit different from other countries. One weird thing is that we eat the same food on Christmas as we do on Easter and on Midsummer. I think it has something to do with the starvation in the 1700-1800´s.

What do you like the most about Holiday Season, what the least?
What I like most is to meet people you haven´t seen for a long time.

Do you have any New Years resolutions?
Wow, I should have a lot… but I would say take time to write more music.

Did you hold on to the ones you had last year?
I was too drunk to even remember what it was about, so… Maybe?

Axl, you announced in 2016 that you will leave the band but changed your mind really quickly again. Why did you want to leave but changed your mind again?
I (and I think I speak for the rest of the guys as well) was fed up with just everything that had to do with being a member in Pretty Wild. We had released an awesome album, got great reviews and what seemed a bright future ahead of us. We just wanted to tour the world and bring that music to all of our fans.

But then shit started to pile up.

One of our booking agents got a heart attack, a co-headlining tour in the UK was canceled because the other band split, two weeks before the tour. Another booking agent that was working on a tour around Scandinavia, his father died and he went into shock and we haven´t heard from him since. Our record was released before the official releasing date (TWICE) among a lot of other things. I was fed up and I did not think it was fun anymore.

After I left I had some personal problems, it was the worst period of my life. My girlfriend at the time died and I tried to commit suicide. I survived (obviously) but ended up in a wheelchair.

The other guys had auditions for a new guitar player but no one would fit. And they could´t play my solos, actually kinda proud of that! Haha
Then they got a gig and asked me if I could fill in and I said yes. The concert was great, even though I was on stage in that damn wheelchair. There and then, I felt it was so great to play with Pretty Wild again. The energy, the power and all the fun! I could not live without it and I am so glad I went back. And hey, they are my best friends and brothers in arms. 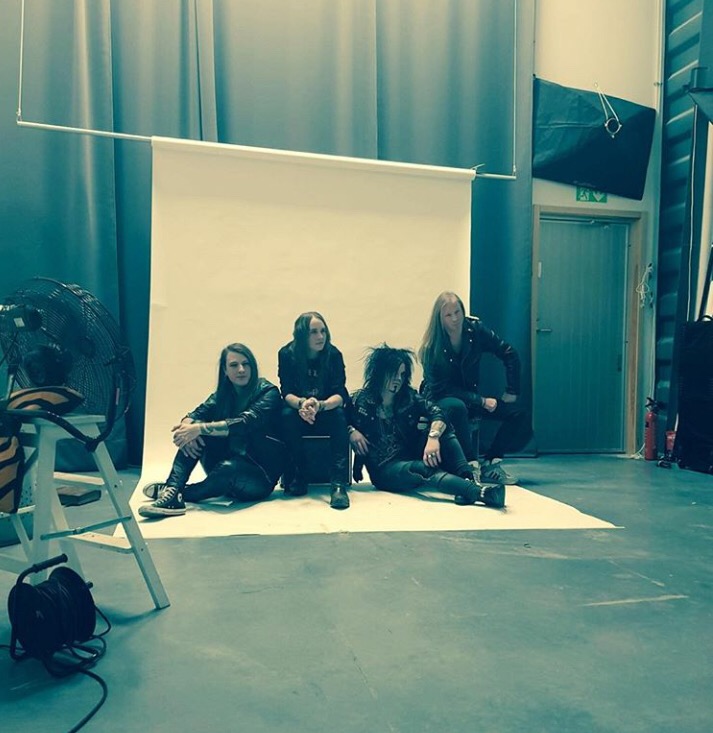 So Pretty Wild’s last album was released in 2014, but luckily you are working on the next album now. What took you so long to get another album done?
As I just said, all the bad luck and everything sucked the energy out of us. It has been some rough years to be honest, but now we´re coming back with a BANG!
I guess there was/is a lot of different reasons. All the bad luck and misfortune, Kim became a father, the view on where we should go, too many cooks spoil the broth and so on. The frustration.

The new album will be called “Interstate 13”, why did you choose that title for the album?
It´s called ”Interstate 13” for a number of reasons. One is the number, 13 and all the bad luck
we’ve had. Also, There is no Interstate 13 in the States for the same reason, that number is haunted they say. We just felt that it really suits us as band and the album because it is a bit heavier and darker.

And do you already know when it will be released?
Don’t know, waiting for the green lights from Sound Pollution right now. The album’s been done since a couple of months ago.

What are the main differences between the Album “Pretty Wild” and “Interstate 13”?
Darker, heavier and with more depth if you will. The lyrics have more substance than before.
As said before, it has a lot of more depth. The album has really dark undertone if you will.
It´s way more personal than the last album.

Already in 2016 you released the video to “Break down the Walls” which will be on your upcoming album. Why did you choose this song to be the first release?
Break down the Walls is showing the way we´re going with our music from now on Heavier, harder, in-your-face but still with the melodies in focus.

Will we get to hear another song before the official album release?
Hell yeah you will! We will release three songs from the album and with a music video to each one. We’re just waiting for the green lights from our record label. The songs are called
* Superman
* Meant for trouble
* Thanks to you

Did you record the album yourself or have you been in a studio? If so where and when was it recorded and who was responsible for it?
We recorded it in several studios with Ivan as both technician, engineer and producer. He has a degree in music production and he did a wonderful job!

Your fans had to wait quite a long time for new material, are you afraid that some of them got tired of waiting and you lost some of them?
Of course we are. We love our fans and we really hope they will stay as true as we trite be to them. It´s been some rough couple of years but I hope that all the Wildhearts will be there once the album is released! And by the way, we almost have written the next album already so the wait will not be that long! Maybe we should even make a double album, who knows?

You will play the Sleazefest in Bochum in March together with Crashdiet and LA Cobra from South Africa and many others, are there any other gigs planned?
We are so looking forward to play at Sleaziest again! We’ve played with Crashdiet a couple of times and with them and Pretty Wild, you know it´s gonna be a hell of a party!!! Really cool booking with LA Cobra!

So why is “Interstate 13” an album that shouldn’t be missed?
”Interstate 13” has a sound that is really hard to compare with other bands/albums. It has a really wide spectra. It will make you wanna crash your car while fucking your high school sweetheart but at the same time see the beauty in a sunrise. Haha. It´s fucked up and so am I and the album.

Thank you very much for your time and all the best for the new release.
Thank you and great questions!

Turmion Kätilöt: What is love?