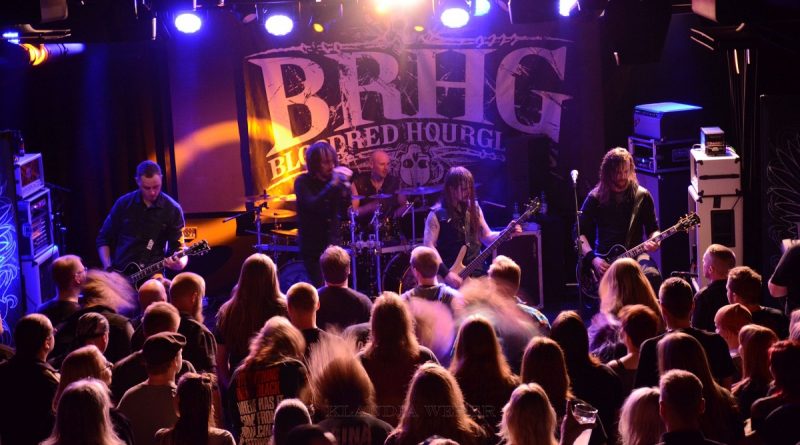 When colleagues of Finnish Kaaoszine organise an event featuring brilliant bands, you simply have to be there – despite the “competition” of ESC … well, it was much tougher to leave the comfy terrace of this club for the first band …

Yet a lot of people decided to go downstairs, which illustrated the quality of this band beforehand, and even more were queueing still when Stormic set off their energetic Core-influenced  Melodic Death. No need to “Survive The Night”, featuring guest shouter Eemeli Bodde  borrowed from Mors Subita (you can actually watch a clip of this performance on the  Bandwebsite).

Thrash Metal and female power came next with Evil Drive who had impressed me back then at FemME . This gig was the perfect frame to present the brand new CD “Ragemaker” – and it seems a lot of people enjoy the band and the fierce growling front lady, considering all those  “Paparazzi” in the front row and the enthusiastic crowd behind them. Which means there must be a lot of videos of this show somewhere in the word-wide-web … the official ones can be found on the Bandwebsite. Setlist: Intro / Anti-Genocide / Land of The Dead / Fight to Die / Run Through The Dark / Ragemaker / Suicide Nation / Fire Is Her Name

By the way, I saw the only recently re-opened live-club for the first time and I am indeed impressed. The stage area was moved (also the bars) which gives more room to audiences, the stage is now a bit bigger and a multi media backdrop offers more options for bands – who can also enjoy a bigger backstage right at the stage – which means, the water damage last winter had caused something positive too … 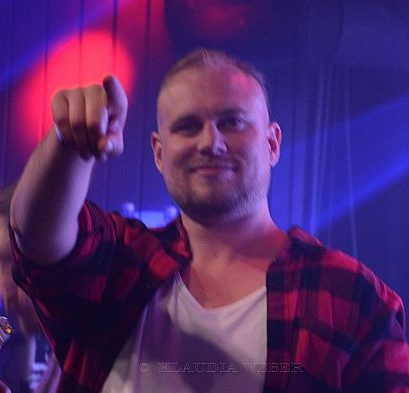 The female power at Medeia kept herself a bit hidden in the background – well, an entertainer like Frans Aalto draws all attention anyway. First, it is rare to face such a cheerful Death/Grind shouter with ambitions in comedy, on this evening also sporting sexy shorts (“borrowed from my dad – and my mom is here tonight too!”) Well, being a bit in the background felt a bit safer too, because all hell broke loose, not only in the audience. The guitarists explored other areas off stage too… hence I was happy about a safe corner I had discovered, perfect for photo shooting. On the best-of setlist a new song (Insektia) that required full audience participation – well, what to say, it was a blast, it is a pleasure to see Medeia and Frans (the latter even in long pants).
Setlist: Intro / We All Fail / Phenomenom / Unseen / Abandon All / Centurions / Insektia / Iconoclastic / Misery Prevails / Dexcension / Cold Embrace

All hell breaking loose best describes the show of headliner Bloodred Hourglass as well (and unfortunately my safe little photo space was gone…) No wonder, this assembly of brilliant instrumentalists and another cheerful, versatile front man – always a pleasure to see those guys! Not much left to say – well, some had obviously attended the Metal Crane as well and trolled poor Lauri with “Eero” chanting (he was substituted by his brother on that evening) … Note to myself – next time (pretty soon, Tuska Jatkoklubi 29. 6.) no photos and rather join people in the mosh pit … because the songs of the recent album “Heal” are way too good and those guys from Mikkeli are always a blast – my Instagram snapshot says it all – or see photo gallery here)

All that’s left is to recommend to check out those guys live, or purchase the Heal album…
Setlist: Quiet Complaint / Architects / The Last Of Us / Valkyrie / We Form The Broken / Six Feet Savior / Times We Had / Oceans on Fire / Where The Sinners Crawl 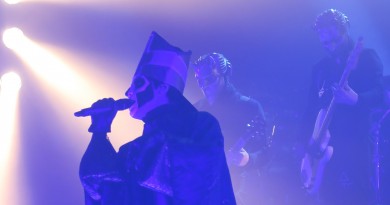