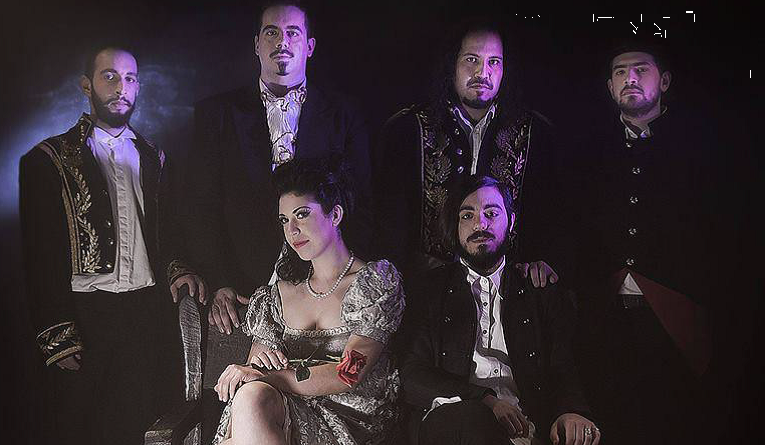 Since your band is quite new for us, and probably also for other people, could you please introduce yourselves!

Gus Dibelas: Hello! First of all we would like to express our gratitude for giving us the opportunity to speak for the first time to Stalker magazine! We are Fallen Arise, a six member band. We play symphonic metal and we started in the summer of 2009 .We have released two LP’S and one EP. The most recent is called ”Adeline” and it’s a Victorian era concept album. ”Adeline” was released by Rock Of Angels Records at 30 October 2015.

Please give us a short overview about your bandmates! Who are you and what do you do besides music?

Since 2013 and from our debut ”Ethereal”, we still are the same six people. The band consists of Spyla and Chris on vox, Frangiskos on guitars and orchestral, Aggelos on bass, Thanos on drums, and me on keyboards and orchestral. Apart from music we have various daily activities. For example Thanos, Christos and Spyla have a day job, Aggelos does his master in Classical Studies, Frangiskos and me continue our musical studies. But all together we have the same priority, and this is Fallen Arise.

Let us talk about your new album: Please give a short overview about the story told on “Adeline”!

As far as the story is concerned, it describes the decay of the human mind and body, as well as the results of such a decay, through a tale. Furthermore, while reading the lyrics, you can find many emotions taken from real life, such as love, desire, hate, bereavement, nostalgia, weakness…

How was “Adeline” written? I cannot believe that it was written in the rehearsal room…

No, definitely not! As a composer I can’t write songs through jamming. I want my time and, to be honest, I prefer to write totally alone because I am more efficient that way, at least, I think so. For ‘‘Adeline’’ to be realised, I worked in my home studio for about one year. I have been keeping a handful of songs for a long time in my ‘’box’’ and I just waited for the perfect time, as well as some of the lyrics. Multiple others have been composed later. Adeline was a really hard task for the band. Sometimes the whole idea, concerning the lyrics and the music and their relationship, was really hard. I believe that with this album we surpassed ourselves. We did something that a few years ago we only admired through other artists, like King Diamond, Dream Theater, etc.

A lot of songs on “Adeline” are containing symphonic elements. Those are far beyond simple string pads. Instead you use a variety of strings, brass, percussions and pianos. Who wrote and arranged this stuff and how was it recorded?

Many bands play symphonic Metal, but only few have such detailed arrangements like you. Who are your idols or references when composing?

Well, when I orchestrated the orchestral themes, I had in mind my favourite composers and some of their stuff. Composers like Nino Rota, Basil Poledouris, Kilar Wojciech and their music were the perfect inspiration for me at that time. If you listen to soundtracks like Dracula, Conan the Barbarian, Romeo and Juliet, you can find a lot of similarities to Adeline’s orchestration.

What are your plans for the near future? Can we expect anything like an international tour?

We are in the middle of conversations concerning many countries in Europe. We really want it and we will try to play in as many countries we can and present our new album. Being on tour is what we want most!

The final question is a more general one: In how far does the current financial crisis in Greece affect your band?

The impact on all of us is really big. As musicians, we try to stay away from all this chaos, focusing only on our music, but there are moments when it is really hard to stay completely unaffected by all of this. A lot of people suffer from this situation, lose their jobs, their family, their life. In the past we have experienced the same problem, losing our jobs, and for some of us it is yet to be fixed. I honestly don’t know the outcome of the next day for the band and for us as individuals. As artists we try to remain optimistic and our music helps a lot. In spite of the difficulties, we will never stop believing in what we do. We owe it to ourselves.

Halestorm: “I would never sell my testicles”

The Ragged Saints: “For my mom I’ll always be the biggest rockstar ever, that’s enough for me!”

Siberian Jay: Sexy on the ice