Having just returned to Iceland from a tour of Germany, Czech Republic and Poland ( we reported ), Árstíðir now spend their time working on their upcoming album and taking care of the Kickstarter campaign for funding it. Between creating new songs and mixing demos, pianist Ragnar Ólafsson took time to reflect a bit on the 7 deadly sins for STALKER. So without further ado I’ll let him have the floor:

The sins are particularly interesting in the context of a touring musician, as things in life tend to get amplified when you are on the road. And the bigger the tours, the more things get amplified and less and less akin to the normal life back home where such sins are much more easily ignored, for better or worse. To make things interesting I will approach this subject purely from a touring perspective.

Gluttony
When I am at home, I usually have strict eating habits, and I stay away from things like white wheat, sugar and red meat. Ironically this is just about the only thing I eat when I´m on tour, simply because these items are often the only things available. When we´re in the tour-bus for long stretches we often have to get our nourishment from gas-stations. Sometimes we eat nothing but sandwiches for days on end. And then there is the catering supplied by the venues, which is often bread based. Added to this: you´re never sure when or where your next meal will be, so you start to stuff your mouth in order not to starve later.

If we are late for sound-check due to traffic jams, I often choose not to eat before a concert, because I find it hard to sing on a full stomach. This means that after a two hour concert I´m starving, and this causes me to over-indulge back stage after the show. Also, after a good show you tend to ´treat´ yourself a little bit and have a little extra, thus indulging in the named sin.

Sloth
If you´re a touring musician, there is no way you can be found guilty of this sin. Despite all the fun we have doing it, touring is nothing but hard work, long hours, and an endless parade of energy consuming activities. If you get a day off in the middle of a tour, you literally have to try and do a little slothing just so that you can charge your batteries and stay sane for the reminder of the tour. But to put things short: if you are lazy and acting on it, you´ll never make it far in this business.

Lust
Surely the desire for money, fame and sex can often be a big driving factor when people choose to pursue a musical career. However, these desires often loose their drive after a while. Firstly because things like fame and money are not easy to come by, so by the time you harvest it you will have had put down so much work to get to that point that it is no longer a desire: it is just a fair payoff for the honest and good work you have invested. Lastly: if you´re going to devote yourself go music, and live your art, all day, every day for many many years it HAS to be about something deeper than just lust. It must be about creating a bond with people through your art, and this has nothing to do with lust. That is purely spiritual.

Wrath
It is no secret that being in a band can be demanding sometimes. You invest so much of your time and energy into the band and at the same time you totally depend on the other guys. You form a very intricate and complex relationship with your band members, daubed with all sorts of expectations. And when you´re this close to each other it is easy to hurt or get hurt. Anger can happen, especially when your at the end of a long and demanding tour. But being in a band is a good exercise in calmness. Because you gain nothing from wrath, but everything from keeping calm. Generally bands that stick together for many years, long enough to craft master-pieces together, are bands that can work out their differences.

Envy
I´d like to address this point from an opposite point of view: the envy directed towards me as a musician and us as a band. When we´re on the road, we meet many different people. Most people are kind, appreciative and supportive towards us. They like our music, and they think that what ever we harvest we will have earned. But every now and then we meet people who are acting strange around us. They obviously project complicated feelings towards us, and often I pin it down to envy. Seeing us on stage, in a big venue, surrounded by an admiring crowd, one can maybe get the impression that it´s all ´money for nothing and chicks for free´ (as stated in the Dire Straits song), but this is far from the truth. Such a person will not recognize the countless hours of writing, composing, rehearsing, recording, touring that has led us to this point. Such a person will not take into account that we´ve worked relentlessly for over five years without pay, driven only by passion. Still such a person will on occasions come up to us, usually drunk, and in a belittling manner state their disdain for our success.

Greed
When applied to this ´on the road scenario´, there is little room for greed. When you are constantly moving, it is hard to find the use – let alone desire – for material wealth. The things you can generally wish for in terms of excess is: 1. a bit more leg room in the tour-bus. Perhaps a tour bus with beds in it. However, since we pay the tour-buses out of our own pockets, we usually set for the cheaper alternative. 2. A little bit nicer hotel rooms, with a little bit more comfortable beds. But, since the accommodation is often supplied by the venue, and the payment for said accommodation often comes out of the fee that we obtain by playing ( meaning: the better the accommodation, the smaller the fee we get ), it is all we can do to hope we get a single room every once in a while, and a little privacy.

Vanity/Pride
When you are on tour and you´re greeted every day by people who think that who you are and what you do is great, it is easy to start believing that you are great. I don´t think it´s a coincidence that this is considered the most deadly of all. The more you get into it, the harder you fall. And I´m pretty sure all musicians commit this sin at some point in their career. However, I also firmly believe that it is good for musicians to experience the pitfalls of Vanity every now and then, so that they can come out on the other end and be more humble. I surely have. 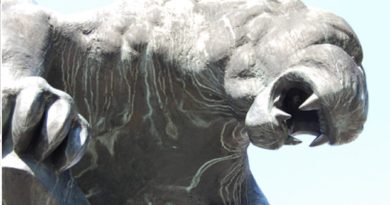