STALKER did it again: thanks to the dedication of several reporters, we could keep an eye on a top-act-tour traveling through several European countries…
interactive photo gallery at the bottom

The European tour of the gothic-metal-legend TIAMAT started with some problems: originally the bands Novembre and Scream Silence should join the tour, too, but because of difficulties with the organisation their appearance was cancelled, so there will be THE 69 EYES and AVA INFERI, who accompany the Swedes on their tour through 19 cities. Hamburg is the first stop.

Opener was – for most of the guests probably unknown – the new band from the former MAYHEM-guitarero Rune “Blasphemer” Eriksen, before three years in Portugal founded: Ava Inferi. With powerful voice the Portugisian singer Carmen Simões seemed to celebrate rituals and spread out their spell attracting in short time more people. The musical visions of Eriksen and his band, who was covered by deep fog behind Carmen, were impressive, full of phantasy and ideas. But the bands work as an opener of this festival was not very thankful – obviously most guests came because of the following act, and so this wasn´t really the audience for the subtle, Portugisian-Norwegian compositions. They wanted to enjoy the show of the 69 Eyes from Helsinki.

And after a short interruption The 69 Eyes in post-80th-leatherlook gave full-speed, and suddenly the hall was crowded. Singer Jyrki 69 offered a mixture of rotten Andrew Eldrich and Dark-Elvis, Jussi 69 at the drums seemed to lose himself like usual in a frenetic ecstasy, and there was a lot of rush on the stage, with all hits like “Brandon Lee”, Gothic Girl” or “Dance d´Amour”. The audience got, what they were here for: one hour Glamour-Action-Rock-Show. “We are the Helsinki-Vampires!” Jyrki several times shouted. After this show everything became much more quiet.

TIAMAT appeared on stage and opened with a song from their new album “Amanethes”. But strange: the audience now were much less and even changed. No more Gothic-Teenies and boys with eyeliner. Even Johan Edlund appeared in straight street-clothes, no latex, no body-painting like in earlier times. Just on his breast shone the reversed cross, sign of his believing in the devil. In the back of the stage a giant reversed cross made from a spotlight-construction told about this message, too. But it was difficult for Tiamat – after the superficial, but exploding 69 Eyes – to find to their own atmosphere. Johan tried to fall into his magick and to take the visitors with him. Powerful metal-energy changed with intensive, but melancholic and silent passages. This seemed to be not enough for some, who probably were waiting for songs especially from the hit-album “Wildhoney” (1994). But from this album Johan chose only one song and this at the very end “Gaia”. So, this was for me a really well done concert, straight, honest, without big effects or gestures. And finally Johan got the audience on his side, many succeeded in shaking hands with him, and he became just the opposite of a dark, gothic, unapproachable icon. (AT)

Cracow, Studio, Feb 14 2009,
The exciting city of Cracow welcomed with a lot of snow. But even of this – the climate of these concerts were really hot. Thanks to the audience, who gave so much energy! And exciting for me was also to see the same bands at a different location: another city, another country and four days after the Hellhounds Fest in Hamburg, so the bands have had already gigs in Berlin, Leipzig and Warsaw. Differed something to the gig in Hamburg? Oh, yes, there were many differences to note!

First of all one more band: StrommoussHeld from Poland opened the evening. The band´s name is quite hard to keep in mind, and Maels Strommö, the singer and guitar-player, explained to me that this name has to do with a secret like hidden in the music: not easy and open and light, rather something to discover. And even they were quite unknown for most, the reaction was warm from beginning on. The start was exactly in time (not like in Hamburg one hour delayed) with already a lot of guests. For the band it was a comeback after they had a great start with two CD-productions, many concerts (on tour with Samael) and much attention europe-wide in the press five years ago. This year they will publish a new album with a kind of music the press calls “dark industrial metal”. Whatever this means – the sound is heavy and strong, accompanied by two guys on stage with computer-programming. StrommoussHeld used the chance to play two concerts in Warsaw and Cracow to introduce themselves again to the public. I think, they are quite unique and have a good live-performance. I am curious about their new CD.

After them the new Portugisian-Norwegian band Ava Inferi appeared – with less fog than in Hamburg, so it was possible to see the rest of the band, not only the singer Carmen Simões. No chance for guitar-player and band-founder Rune Eriksen to hide himself modestly in the background. Not like in Hamburg, where most of the guests stood sceptically far away from the stage, in Cracow the audience welcomed this newcomer very heartly and from song to song with more and more enthusiasm. Carmen danced and blew kisses to the people, so probably this won´t be the last concert in future of this band in Poland…

Then The 69 Eyes – like in Hamburg the hall was immediately full. The crowd – well, they drove crazy at the stage. The girls yelled, attacked the securities, the photographers in front of the stage had to leave. The 69 Eyes enjoyed this mood and offered again their rock `n´goth-circus with their crazy drummer and the same playlist like in Hamburg. Even if you don´t like this music – as an live-act they´re really fun. I like that each of the musicians somehow plays a special role representating an individual character in this theatr, and the show is cool.

And at least the main difference to Hamburg: Tiamat .
Now the hall looked like sold-out. Mighty chants “Tiamat, Tiamat!” already during the intermission, when the stage got rebuilt. Again the spotlight-cross in the background of the stage. And when Tiamat appeared, it was a really highlight. Pure enthusiasm in the audience, shouting, screaming, heat. I spoke with Johan Edlund after the concert. “Yeah”, he said, “it was not easy in Hamburg, but here in Cracow and in Warsaw, too, we have wonderful fans.” Of course, it´s much more pleasant for a band, if they get such a reaction like in Cracow, and the answer, which Tiamat gave, was a great, intensive concert full of emotions. On this tour plays the new guitarero Johan Niemann, after Thomas Wyreson left Tiamat in the end of the last year because of family-reasons. But after the concert there was no time to lose: back in the nightliners and off to the next gig in Praha. (AT)

PRATTELN, Z 7, 21.02.2009
A flue made the end of the old year as boring as the beginning of the new one. But finally back on track I can enjoy my only addiction – live music, and more music, and music in general, which also causes a steadily growing CD collection. But only originals, not those Shit-self-made downloads. I rather cut budget in other areas, in order to buy CDs. And in case you have not made a new year´s pledge yet – please, support your bands and buy their original CDs! Enough of that now, let´s check out the gig…

STONEMAN
are one of Swiss hopefuls in the scene, and they entered at short notice once again the Z 7 stage. Their show is once again pretty weird, and they get the audience going with „Devil in a Gucci Dress“and the Rammstein-inspired „Wer ficken will muss freundlich sein“ (You got to be friendly if you wanna fuck). Singer Mikki gets some girls really hot with his smile and his sexy moves. And once again this band pulls it off to inspire the audience with their music.

AVA INFERI
This act from Portugal with female singer is the opposite of Stoneman, it starts promising with power, but slowly it turns into lullaby sound. That is mainly caused by the vocals that switch between extremely high opera voice to deep registers, and it seems the singer can only do it very slowly. Therefore everything sounds pretty much the same, and the mood in Z 7 drops rapidly. Without a couple of enthisiastic AI fans their whole gig might have ended badly.

THE 69 EYES
Finally they are back, those Finnish sex gods! It´s impressive what those guys pull off, they deserve respect. Without any breathing break and very professional, they play one erotic hit after the other and cause some orgasms in our ears. Ha, and some girls might have been inspired by singer Jyrki´s sexy moves, too, and feel it perhaps somewhere else… This guy has incredible charisma, and young girls get really excited, despite the fact that Jyrki might be quite close to their fathers´ age … Hot music, hot vocals, hot show – simply great, only the sound could have been better.

TIAMAT
It has been a long time since those Swedes had visited us, therefore it was indeed a pleasure to see them again. This band is something special, outstanding, just like their sound that is hammered into our ears in perfect quality. And there is also Johan Edlund, who seems like something not quite from this planet, because his voice has something mystical, as well as his charisma. Although he was wearing plain Jeans, T-Shirt, wool cap, and despite the fact that his make up looked like “the next-door guy experimented with his sister´s make-up set a for the very first time”, it did not effect his charme. He and his work deserve all our respect and appreciation, and this is exactly what he received that evening from all those fans who cheered to him from their hearts. (SM) 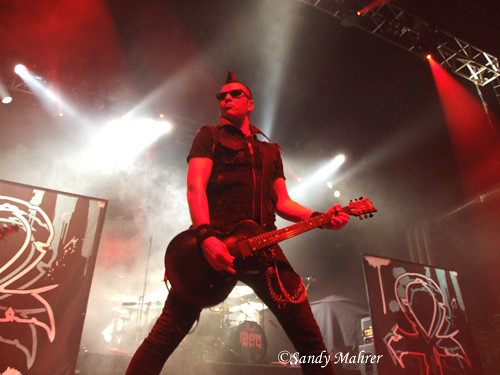