Right before their European tour kick-off show in Helsinki, Keyboarder Aleksi Munter and singer Mikko Kotamäki found time to meet with STALKER for a chat. So here you can find out the real reason why their recent output “New Moon” was recorded in Sweden, why there´s a new guy on the drum seat now, what´s the thing with “Pussy Doom” and which topic they are totally at odds with….

First of all, congratulations on the new album – and this brilliant marketing idea, calling it “New Moon” just like this Twilight movie sequel, even releasing it about the same time… (laughter)
Mikko: The New Moon album has nothing to do with the movie. Actually Juha (Raivio, band-mastermind and guitarist) decided on the album title way before the movie came out… so that´s just a coincidence.

As you wrote two of the lyrics on “New Moon”, can you tell me more about it? Is it a continuous story, or what´s the background of the lyrics?
Mikko: Well, it´s basically about the experiences of life.. yeah, it´s the same stuff again, nothing special… I don´t know (pause) Well… most of them are songs about girls.

Well, I hope the inspiration to that came just from literature and not from personal experience (laughs)
Mikko: Actually I would love to kill a lot of people (laughter) But unfortunately that´s illegal (more laughter)

Are you satisfied with the reactions to the new album so far?
Aleksi: Yeah, they have been good. I just got really pissed of when I read one review about it, they were basically saying that we have done “yet again the same album”. And I was like WHAT THE FUCK, what do they want us to do? There´s now everything, from Lovex to Black Metal on this album, so… (laughs) what do they expect from us? We managed to do an album that sounds different but still sounds like us, so I don´t know what they would want us to do otherwise…

As you mention Black Metal – Mikko, I know that you are, were a big Black Metal fan, so you must be very happy now with this album…
Mikko: OF COURSE! (laughter) I am very happy about all those influences, and it still fits our style pretty well… and…
Aleksi:… and I think we have been talking about blast beats since the first album or so. It´s nice that we now have them, they are also influenced by Emperor and the like, melodic Black Metal. 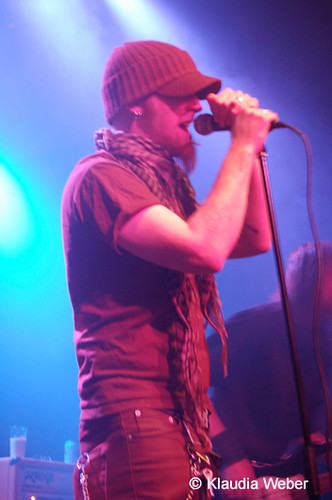 I was pretty surprised about it, actually. Another surprise, Mikko, it seems that you are so much more comfortable with clean vocals now. You´re not so shy any more …
Mikko: Well, it´s about time. (laughter) Seriously, I´m not such a good singer…
Aleksi: I have seen him develop from our first album, he has never sung any clean vocals before. I know that for a fact because we have been in another band before, and you can hear it on “The Morning Never Came”. Comparing that to “New Moon” it´s a fucking huge difference, and I´m really glad that he has developed this way.
Mikko: And we have been touring so much , that helps a lot

OK now to something else – so why did your old drummer Pasi Pasanen leave, and how come you hooked up with Kai Hahto (the new drummer)?
Mikko: Well, actually he didn´t leave, it was our choice. So… we had some difficulties with him… now don´t get it wrong, we are still good friends … Well, when you´re touring a lot…
Aleksi:… and when touring conditions aren´t that good, traveling 35.000 km in a van, it demands a lot from people, and if there are some glitches, then it´s not going to work.
Mikko: YEAH. That was the reason.

So how did you hook up with Kai then? I remember that you played with him before…
Aleksi: Yeah we played with him on the tour in the United States in 2007, and we knew him even before that. But on this tour we really clicked, we get along very well and he is an excellent player, so he was of course for us the first one to call –
Mikko: THE ONLY ONE to call
(laughter)
Aleksi: Yeah, the first and the only one to call, we had only a month before going to the studio when we called him, and we knew that we needed the best

Is Kai´s band Wintersun still continuing, or is this now a project of the past?
Mikko: Well. They are quite slow. (explosion of violent laughter *) Kai said that the next Wintersun album is coming out next year, but he said the same thing in 2007. So I don´t believe it until I see it in a record store…

*) Wintersun´s debut album came out in 2004… and fans are still waiting for the follow up that was supposed to be released in 2006…STALKER will keep you informed… the ed.

So those blast beats have nothing to do with Kai…
Aleksi: No, as mentioned we have been talking about that for a long time, and all the songs were ready even before anything happened with Pasi. We had called him after we decided on the blast beats.

Wasn´t it difficult to work in two different studios, one in Sweden (Fascination Street Studios, Jens Bogren and one in Jyväskylä (Noisework Studio, Hannu Honkonen), and this one just for the keyboards?
Aleksi: I am so used to work with this guy, he is actually Matti´s (= the STS bass player´s) brother, in a small studio in Jyväskylä which is basically specialized in keyboard productions, so it was a natural choice for me to go there.

So it wasn´t kind of weird to do the recordings without having the other guys there…
Aleksi: No, no. Besides, I think the last 3 albums were done that way, since “Hope” I have always worked alone on the keyboards
Mikko: And that´s the way we like it.
(laughter)
Aleksi: That´s the way I like it! I have worked for Insomnium also in the same way, and for Ghost Brigade, I like to work that way.

How far has this Iron Maiden DVD influenced the New Moon production? (laughs)
Mikko: I don´t know, because at that point I wasn´t in Sweden yet. I was the last one to arrive and stayed for 8 days.

Lucky you, so you didn´t have to watch Iron Maiden all the time…
Mikko: Actually I had my girlfriend with me, so…

Oh, Ok….
(A moment of awkward silence, followed by the explosion of – pretty dirty – laughter)

Back to music – “Plague Of Butterflies” the previous album, was originally written to be performed by Ballet Deviare, New York. So why didn´t it work out?
Aleksi: I don´t really know what happened, there were some money issues and strange shit going on. It´s a shame that it didn´t happen. We´re still in contact, even though the whole thing got screwed up

So some co-production could still be happening in the future?
Mikko: Hopefully, maybe some day
Aleksi: Maybe just the time wasn´t right or something

How did you get to co-operate with Steve Rothery (Marillion)?
Mikko: We met him, one year ago when we did the UK tour with Apocalyptica. Juha has been a big fan of Marillion, and we met him in Oxford, Juha asked him if he could play one solo for the album, and he was like “Yeah why not?” As simple as that. And he is a really nice guy.
Aleksi: But we did have some technical problems, like the song he recorded over was in a wrong tempo and stuff like that, this is the reason why it is not on the album. There was some misunderstanding …
Mikko: … and I we got the tracks too late for the album.
Aleksi: Yeah, and when we got them it was the wrong tempo. But when after we got the right ones we could put them on our single “Servant of Sorrow”

Well, with this new album and a new drummer – which means some changes – how would you sum up your journey with the band Swallow The Sun so far?
Mikko: WEIRD (laughter) …and it´s been fun
Aleksi: Everything has happened pretty fast, because we are not an old band, really
Mikko: But think about that, there´s only 1,5 years to go, and this band is 10 years old
Aleksi: Yes but basically everything started functioning in 2003
Mikko: That´s when you came in
Aleksi: Yeah but before that you guys didn´t really do anything
(laughter)
Mikko: Well I was at the first rehearsals in 2001
Aleksi: But the first demo came out in 2003, and it was a side project for all of us back then, we didn´t really expect anything, and when things started happening – it was really fast 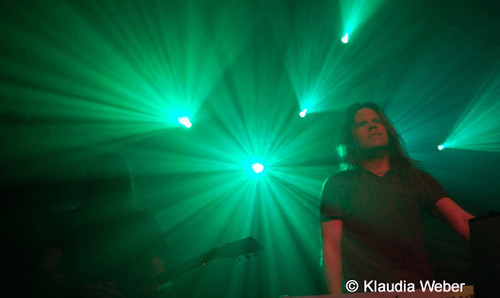 Yeah I had pretty much the same impression from the outside – suddenly you guys took off, and nobody can really explain why… it´s not like your making commercial compromises… like the Butterfly album – only one song with 40 minutes…
Aleksi: Yeah this is what I am really happy about, that we really haven´t done any compromises, and that´s something perhaps – when doing songs we kinda fight about them, everybody has their own thing they want to do, and we have to find a way to work around it all.
Mikko: That´s probably why those 5 people here in Finland like us (laughter)

Is this now the official definition of your style, the “Lords of Pussy Doom”?
Mikko: That´s Juha´s thing, he has to put some fucking stupid humor into fucking anything
Aleksi: I don´t like humor
Mikko: Me neither. For Juha it´s the funniest thing ever, “yeah, we play Pussy Doom”, and he is fucking laughing is ass off
Aleksi: Yeah, he has been laughing his ass off in the last five years
Mikko: Yeah. “Pussy Doom – ha ha ha ha” …
Aleksi: … and it was not even funny the first time
(laughter)

Oh I forgot to ask earlier – is such a short rehearsal time before going to the studio a normal thing for you?
Aleksi: Oh THANK GOD, or whatever, thank Satan…. For “Ghosts of Loss” we rehearsed like half a year, three times a week, and it was fucking consuming. I was SO happy that it was only a week…
Mikko: And when you now listen to that album – you really cannot hear it at all
Aleksi: (laughs) YEAH because …
Mikko: … soo fucking shitty playing…
Aleksi: And too much going on, we could not really arrange songs by then (laughs)

By the way, the female vocalist on “Lights on the Lake (Horror pt. III)” Aleah – who is she?
Mikko: Born South African and lives in Sweden. And that´s why (starts giggling) we recorded the album in Sweden (laughs) FOR SOME REASON
Mikko: Yes for SOME REASON Juha insisted to record the new album in Sweden
(laughter)

OK…OK … no further questions…(laughter)
but… last one, why is this song called “Horror part III”, how is it connected to “Don´t Fall Asleep (Horror pt.2)” and “Swallow (Horror pt.1)?
Aleksi: There is a common theme going on in all three songs, like one melody that is in all of them!

OK will listen to it more closely once again – thanks for your time, guys!

Cypecore: Sci-Fi movies in your head