21.000 visitors this time meant some recline in comparison with the previous year, and you could see that also backstage – easy to find a place to sit down, and the big catering tent wasn´t needed. The reason for this was probably the lack of big foreign names in the line-up and thus the biggest crowds were attracted by Finnish artists this year. Nothing had changed about the challenging festival area – every walk from one stage to one of the others simply took a lot of energy. 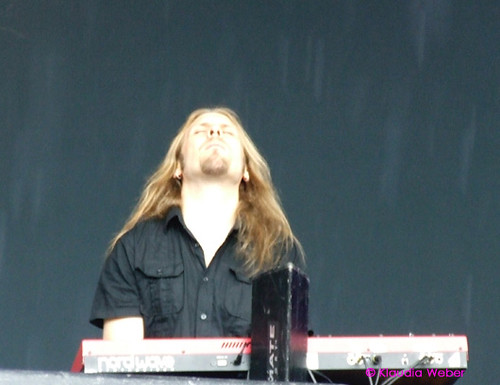 Stam1na
was one of the last bands to be included in the line-up, and they turned their “kymppihän riittää” (ten is enough) into eleven. The guys, who had to get up early in the morning to make it on time to Ankkarock and be one of the first bands, delighted us with a live proof of what a real guitar war is, trying to hit your band members with your instrument! (Ane) 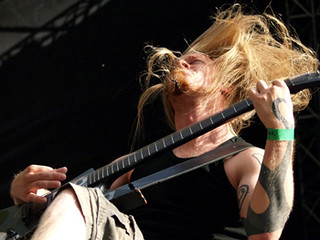 Ensiferum,
who seem to be having a lot of new things coming up in the near future, came to offer some “uutta paskaa” (aka new shit), bare-chested and wearing Finnish flags as skirts. Luckily the weather (which was expected to be rainy and mostly inadequate for an outdoors music festival) turned out to be hot and sunny for the first day of Ankkarock, so many of the people among the audience, all dressed in black, must have been jealous of their outfits. (Ane) 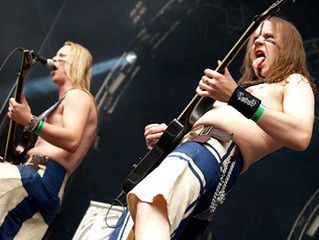 New York Dolls
The band which was long separated when most of today´s festival goes were not even born yet are probably so popular here in Finland because there are some similarities between them and the Finnish Glam Rock divas of Hanoi Rocks – at least when it comes to age and fashion style. This afternoon the dolls, however, attract attention not with their extravagant fashion statements but with their bored looking singer David Johansen. Somehow it seems that he would rather spend his time playing bingo in a parish hall than entertaining the crowd. All other band members visibly enjoy playing a lot more and so even small technical problems are professionally bridged with an improvised guitar solo by Sylvain Sylvain. Personally, I didn´t get much out of this rather bland tootling. (KG) 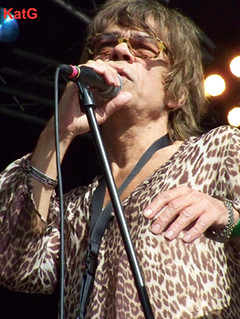 Hardcore Superstar
Ankkarock´s hottest act for numerous female festival goers who longed for this gig of the Swedes. Musically maybe not everyone´s cup of tea but at least entertainment-wise the guys have got what it takes especially jokester guitarist Vic Zino who makes face after face after face. Davey Havoc look-a-like Joakim Berg wouldn´t really need to do much because most of the girls succumbed to his piercing eyes long time ago. The guys simply know how to put up a show and have the crowd eating out of the palm of their hands. (KG) 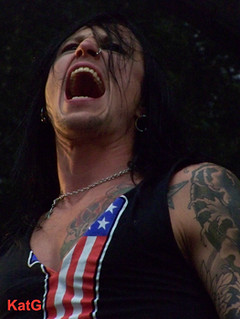 Turbonegro
The fast-seller in this year´s Turbo merchandise must have been sailor hats – everyone wants them, everyone has them and so the little white hats are sold out long before the gig starts. The guys of Turbonegro are greeted in Vantaa not only with the obligatory “I Got Erection” but strangely also with “All My Friends Are Dead” shouts – with which the Norwegians also kicked off the show, followed by “Do You Dig Destruction” – the same two songs like at the Rockperry Festival in Vaasa a couple of weeks ago. Not much was changed about the song selection but song order and in between song banter varied slightly. 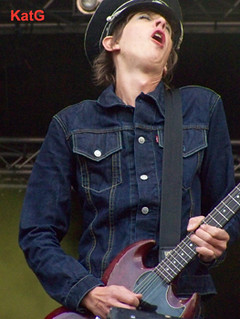 Still this gig spread a lot more energy and the “denim demons” seemed to enjoy playing a lot more – simply said, the atmosphere was just a lot better than in Vaasa. Maybe it was because this gig happened already in the afternoon and most people didn´t have enough time to put themselves into a delirium yet?? Either way, three cheers for Turbonegro! (KG)

Musically not quite my thing, but those Norwegians are fun, to watch and to sing along. Moreover, you receive some worldly wisdom like : “When everybody hates you, you got nothing to lose”. (KW)

Dragonforce
Oh no, what´s that? I had already seen the special show of keyboarder Vadim at Tuska, and colleagues had warned me, but this year´s outfit of that guy (and his ballet dancing) were somewhat a shock… Well, good that there´s more to see on stage, in fact so much that you don´t know where to look first. Musically they offer Speed-Metal with fun factor, moreover, there´s real appealing ear candy like “Starchaser” that you cannot escape. 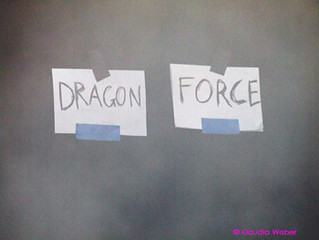 What was quite impressive, too – this presumably very expensive and artistically pretentious backdrop. (KW)

Cavalera Conspiracy
Friends already recommended them as “the real Sepultura” therefore I was excited to see Max and Iggor Cavalera (plus Mark Rizzo, git, Johny Chow, b); moreover, I was curious if Max indeed just uses 4 strings (what he claimed during a legendary “guitar lesson” video many years ago). Despite the fact that I did not know the band material, the Brazilians took you by storm. This raw energy, the merciless Thrash riffing and rhythms with a touch of Brazilian Folk – no wonder that also the younger generation of Metal freaked out. 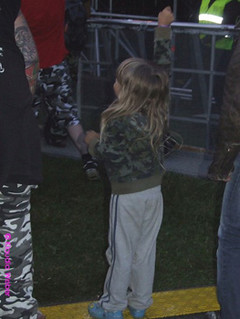 “Hearts of Darkness” or “Black Ark” (with Max´ stepson Richie on guest vocals) gave your neck muscles a heavy workout, and the ongoing huge Moshpit grew even bigger during “Ultra violent”. As expected, they also played Sepultura classics – “Refuse, Resist” and to round their gig up, finally “ROOOOTS Bloody ROOOO-OOO-OOOOTS”!!! 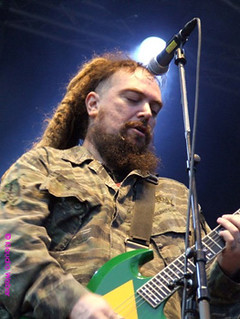 Hoarse-throated and stiff-necked – but happy! – the STALKER crew joined one of those numerous yet unofficial Ankkarock-Afterparties.

Not easy to make up your mind, one starred the former STALKER Fresh-Act Hellcity Punks on the swimming Rockbar Wäiski (indeed a still working? ship anchored at Helsinki-Hakaniemi), but we chose Calypso at Tikkurila because of being nearby to witness a great & inspiring show by Mind Of Doll, having the crowd sweat before the inspiring & hypnotic Blake entered the stage.

Amorphis
Weather gods looked mercifully on Saturday, but it seemed that those Kalevala-Shamans had made a bad deal with them, as – once again – there was pouring rain during their show. But – once again – weather-proof Finnish audiences didn´t care, and witnessing keyboarder Sande´s sunny smile and Tomi Joutsen´s hypnotic vocals – who cares about the slightly increased amount of moisture? 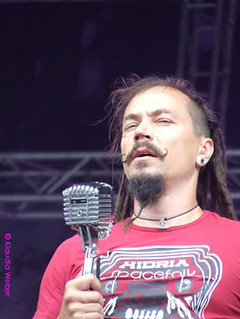 Basically the focus was on the recent CD “Skyforger”, with songs like “Silver Bride”, yet superhits like “Alone”, “Smoke” or “Silent Waters” were not to be missed. Singing and clapping along, e. g. during . “My Kantele” finally chased away the clouds, and the rest of the day should remain – almost – dry. (KW)

Turisas
tried to destroy Puistolava with their Pyros, but they definitely set the audience on fire, although they mentioned to be tired after just having returned from Germany. The Finns rocked and danced until they dropped – literally. Their Folk-Viking-Metal gets you dancing immediately, especially “One More” or this Boney M. cover version “Rasputin”. (KW) 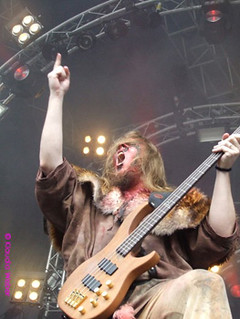 Amon Amarth
Viking-Metal, part II on this day. A bit rougher sound-wise, but not less entertaining in terms of presentation. The Swedes convinced the Finnish audience at once, even without special effects. Songs like “Live for the Kill” or “Guardians of Asgard” found their way into my banger-brain, too. Horns up! (KW) 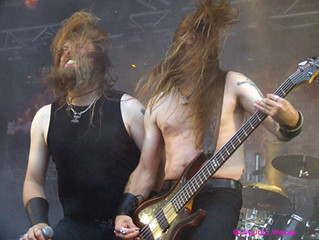 Volbeat
One of the crowd pullers this year – the Volbeat guys attracted at least as many people as the Finnish superstars. Last year they still rocked the smallest stage at Ankkarock, within one year the Elvis metallers with their sing-along friendly anthems played themselves up to the biggest stage and with good reason. Under the motto “Guitar Gangsters Cadillac Blood” the stylish Danes delivered one of the most entertaining gigs of the festival. The atmosphere was simply awesome both with Volbeats own songs and with cover songs like “Angelfuck” by the Misfits and Dusty Springfield´s “I Only Wanna Be With You”. In between the songs there was always time for one or the other funny story for the already merry crowd who obediently sang and danced along to every song. (KG) 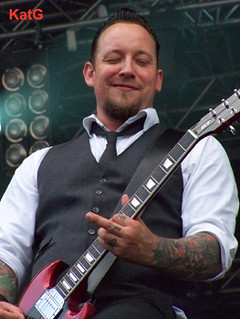 Fucked Up
had due to tough competition (Volbeat) a smaller audience, what a pity because those Canadians are great. First, their energy, the fun, Hardcore Punk sound & attitude – and they did everything to fulfil the announcement “Hello, we are FUCKED UP!” Singer Father Damian aka Pink Eyes (Damian Abraham) turned out to be a real maniac, after a strip-show he joined the crowd, as far as the microphone-cable allowed – spent the entire show as the center of a moshpit, inviting the crowd to shout along, an “interactive” show so to say. 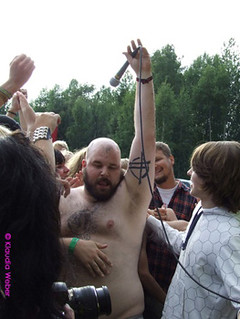 When they played a Ramones-Cover I felt like joining this pit – “Hey-Ho Let´s Go”… COOL BAND!! (KW)

Testament
Although those Thrash-classics worked as mass attraction, the Americans could not quite reach the attention level that local heroes Kotiteollisuus had achieved; no way to reach the front for photographing – see here: 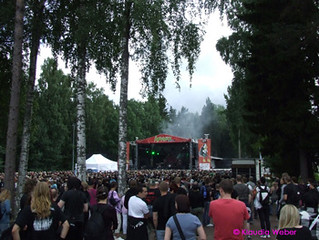 Another factor for having only die-hard-fans (well, MANY of them) at the front rows was the sound wall produced by Chuck Billy – vocals, Eric Peterson – guitars, Alex Skolnick – guitars, Greg Christian – bass und Paul Bostaph – drums. When they started it was rather like the lift-off an entire Bomber fleet, even WITH ear plugs. Therefore I have no idea which song was played first… 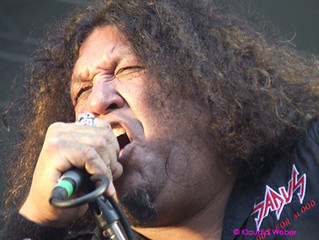 Escaped to the back rows, I could identify material of their recent CD (e.g. the title track “The Formation Of Damnation”, or “More Than Meets The Eye”). Chuck Billy & Co played to my delight also many of my all-time-hit list: “The Preacher”, “Over The Wall”, “Practice What You Preach”, “Into The Pit” and their super hit “Burnt Offerings”. No wonder the spirits were high and that a huge mosh pit formed and continued throughout the gig. Even Chuck was impressed and dedicated to Finnish Testament fans a final “Disciples Of The Watch”. With this band – my personal headliner – Ankkarock 2009 ended for me… (KW)

Sonata Arctica
Sonata Arctica then played the grande finale of the festival with a „special show“. Those who read “special” and know Sonata´s Tony Kakko already fear the worst but the singer this time decided, surprisingly, to wear a rather modest outfit. Less modest was then the stage show with the obligatory pyro and flame throwers and the rather weird announcements (what song is introduces with baaing – exactly, “Black Sheep”), gymnastic aerobic exercises and the typical, almost theatrical facial expressions of the frontman – all just contributes to the fact that the crowd is entertained in the best way possible. Not to forget the songs, of course, which even the last, still upright standing festival guest was invited to sing along, as well as still possible. (KG) 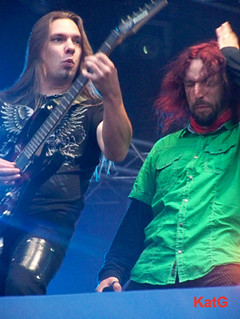 1. Chuck Billy, Testament, because he knows a) better to wear black when size XL and b) even better to wear SOMETHING…
2. Father Damian, Fucked Up
3. Hank von Helvete, Turbonegro

And with this another Ankkarock festival draws to a close – a bit more low-key than in the years before but nevertheless everyone involved had once again fun, entertainment and pleasure galore.

Ensiferum – Netta Skog: “Now I´m a musician and a baker!”