For a couple of years there has been a Swiss festival just offering Rock music, therefore it is a Must to go there, although the location is right in the woods, in ice-hall Huttwil, a small village in Emmental. In previous years there had been just bands from Switzerland, but this time big bands from abroad were invited. Because of bad weather conditions the festival remained in the ice-hall this time, where the big stage managed to met all demands.

The Swiss band Eluveitie opened the festival with medieval Folk Metal and thus warmed up the audience for one of the main acts later. Unfortunately only few people were there, but they made noise for hundreds. Favez from Lausanne rocked Huttwil with their Rock´n´Roll and unfortunately had to stop after 40 min.

Dog Eat Dog
did not really fit into this festival, in my opinion, because of those Hip Hop elements; they should have had Favez playing for two hours. And instead of being happy to perform in front of a rather tolerant audience, the drummer started a fight. That sucked indeed!

Nazareth
Those Rock giants from Scotland had a great come back recently, no wonder that Switzerland welcomed them with open arms. The songs are still the same, a bit Rock here, a bit tearjerker there. And most in the hall ended up hugging and smooching, when they played “Love Hurts” and “Dream on”.

In Extremo
The band had a ship on stage, bag pipes in their hands and a lot of songs going straight to the heart. Pyros and special effects opened the show that included hits like “Liam”, “Erdbeermund” and “Mein rasend Herz”. A great show, and you can see them again in early 2008 in Switzerland.

Hammerfall
“Let the Hammer fall”, this band is quite at home in Switzerland, playing one or two shows every 4 months here, and always sold out although it is such a small country. For most visitors this was the top act and main reason to attend the festival. The audience seemed to know every single song and sang sometimes louder than the band, e.g. during „Riders of the Storm“ or „ Crimson Thunder“. The band thanked them with several encores that still seemed not to be enough, some reacted with disappointment, when the Lordi gig was prepared.

Lordi
The main act of the day had less people than the Swedes as many left the hall after Hammerfall. Lordi also had problems to motivate the audience, the sound was bad and Lordi´s voice in a bad shape. It seemed that the rather bad mood of the band infected the audience. Luckily they managed to warm up, the songs got better and better, and at the latest with their hits „Would you love a Monsterman?“ and „Hit Hardrock Halleluja.“ they had convinced the people. And because Lordi are nice monsters, they had some Meet and Greet for small fans afterwards in the hall.

Basically a great first day of 3. Rocksound festival. Yet the personnel was not so friendly, you had to wait 20 min at the bar although there were not so many people there, and sound and lights were quite bad – hence those bad photos. But it is difficult being squeezed into a small pit with 30 photographers and video cameras…

I would have written about Saturday, too, featuring e. g. Samael, Gotthard and Alice Cooper, but high fever and a festival unfortunately don´t go together… 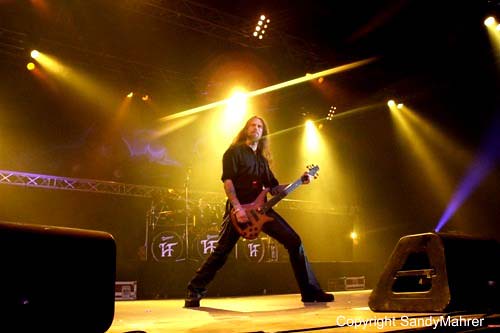