If you have no clue why this festival had been given this name, well, if you just go there you understand why. Despite being located right by the seaside – the view is simply stunning! – you feel grateful for any little breeze, for every little cloud, and even for every drop of rain. Well, only if it´s not pouring down too heavily…

Korpiklaani
was a good beginning, a great mix of medieval sounds (violin, bag pipe, akkordeon) and Humppa Metal that immediately makes you feel like dancing. The Finns gave you a clue what to do about the temperatures: “Let´s Drink!” Many fans still preferred ice cream to those foamy beverages…

Pain Confessor
The sound reminds a bit of old Sentenced – melodic Death Grind, very brutal but also with groove and an energetic stage presentation, no wonder that the space in front of the stage was soon filled. The band fired “Fiery Thorns” and “Butterfly” into the audience, and also “Ne Plus Ultra” from the new album “Purgatory of the Second Sun”.

Timo Rautiainen
Right away, I liked Timo with his old band “Trio Niskalaukaus” better, because more Metal and evil memorable riffs. This time it was more Folk influences and Doom than Metal, and still Finnish lyrics (“Loppun Ajettu”), therefore the Finns really like it.

Stam1na
People chanting before the show started, and so many of them – this band had definitely also made a nice appearance on the main stage. Brutal Death/Metalcore made both ear drums and stomach vibrate: “Vapaa Maa”. Singer Antti Hyyrynen, who also directed the Swallow The Sun video “Don´t Fall Asleep”, entertained the audience also with cool statements.

Megadeth
The tooth of time had had mercy on Dave Mustaine who hardly changed in those 20 years of Megadeth. Aided by the brothers Glen (git) and Shawn Drover (dr) and James Lomenzo (b, back voc) he delivered a handful of songs – e. g. “Sleepwalker”, “Skin O´My Teeth”, until the red-head addressed his audience. Nice and polite, like never before, he thanked the fans for getting the new album “United Abominations” to No 2 of Finnish album charts and said that tonight he´d rather keep his mouth shut so he could play more songs. 🙂

Naturally, who would mind that? They played new hits „Washington is next“, „Gears Of War“, „Kick The Chair“ (von The System Has Failed) and a selection of classics:„Devil´s Island“, „Wake Up Dead“, „Hangar 18“, „Tornado Of Souls“, an emotional „In My Darkest Hour“ and, surprise, surprise, “Mechanix”, Mustaine´s version of Metallica´s “Four Horseman” that he had written anyway, to be found on Megadeth´s first album “Killing Is My Business”. The slightest pause – sips of water, changing guitars – was used by the audience for chanting, and the maestro appeared touched by that. Finally with “Peace Sells” the audience was invited to sing along, and Dave could have left also “Symphony of Destruction” to them, as it is a very popular piece at Finnish Heavy Karaoke. Great show, and alone just worth to travel to Tampere! (Now everyone: Me-Ga-Deth, Me-Ga-Deth…)

Entwine
had a rough start as the major part of the audience was still queuing at the gate when their gig started. But the girls in the front rows screamed like 100 people… a very emotional show by singer Mika, and a very appealing band who made this time again without keyboarder. Luckily I could reach the stage just in time to hear my fave “Still Remains”.

Thunderstone
The band name, a bad omen… indeed darker clouds gathered… singer Pasi Rantanen enjoyed the dialogue with the audience: “Are you still tired?” A good mix of Power/Old School Metal that was a lot of fun on and in front the stage, with e. g. “Swirled” and “Roots of Anger” from the new Evolution album.

Kotiteollisuus
“National industry” just sings in Finnish, so you miss those ironic lyrics that cause this cult status of the band. This trio combines Metallica-riffs, Rammstein rhythms and the snotty attitude of Motörhead, rather midtempo, for the headbangers (“Rakasta, ei rakasta”). Moreover, singer/guitarist Jouni Hynynen is co-star of a TV series where two “dudes” (Äijät) try out various jobs, e.g. butcher, tank driver, glass blower. The other dude Jone Nikula, known from Finnish Idols-Jury and host (Tuska, FME), now also appears as guest singer on the new Before The Dawn single “Faithless” (out end of June).

Kotipelto
is a synonym for melodic uptempo Power Metal, and it does not matter if as Stratovarius singer or with his solo project. His top-musician line-up included also Children Of Bodom-Janne on keyboards. Big show, passionate style and of course, this great voice: “Sleep Well”, “Take Me Away”. The only real surprise – Timo Kotipelto had a beard, which becomes him indeed. When he started to sing “Angels Cry” (from the new Serenity CD) it seemed he has predictive powers – it started to rain…

Dimmu Borgir
Just like back then at Tuska, those Norwegians managed to piss of the weather gods again, and as if it was a careful arrangement, a thunderstorm began, but the fans did not flinch from heavy rain, neither did the band who started even a bit earlier. Due to the darkened sky their light show looked much more impressive. They gave a bombastic “Lesson in Violence” to the Finns, mainly based on the new album In Sorte Diaboli, and they did not forget classics (“Cataclysm Children” or “Phantasmagoria” from Spiritual Black Dimension). Finally my all time fave “Mourning Palace” turned into a medley with an Iron Maiden “Fear Of The Dark” cover, and with the last riff fading the sun dared to reappear.

Poisonblack
The improved weather situation lured me to the smaller stage, too, but the sound of this Finnish quintet – a Goth Glam Metal crossover – could not really keep me there for a long time, despite Sentenced (R.I.P.) vocalist Ville Laihiala and his velvet voice…

Type O Negative
“We are Type O Negative, we come from New York”: This headliner was longed for by many musicians, too, but had to play in front of a slightly thinner audience, perhaps the weather situation had taken its toll. Or was it the program that violated all kind of expectations? It started quite promising with Beatles “Mystery Tour”, “We hate everyone” and “Anestesia”. Without compromise, as always, Peter Steele & Co got carried away in long doomy instrumental improvisation feedback orgies, a “Hey Joe/Hey Pete” cover and left stage three times, for a quite long time. I might be wrong, but I think they did not play a single song from their new “Dead Again” CD… therefore Doom fans must have enjoyed it, but finally the last third of the program was dedicated to Bloody Kisses hits: “Can´t Lose You”, “Black No 1” – here the audience sang along with the “loving you” part, and finally “Christian Woman” with a fan on stage, dressed in green shirt, with fake beard and a wig, perfectly illustrated “Jesus Christ Looks Like Me”. Pete also appealed with a few words in Finnish – and made the day.

The Festival and the aftershow parties had taken their toll, so I missed Leverage who could play on the main stage because Violent Storm had cancelled. Yet I had to see a few (cover) songs by Ari Koivunen who had refused to sing “Pop crap” and indeed won Finnish Idols Contest with Deep Purple/Iron Maiden/Kotipelto classics. A few more known faces in his band, e. g. Luca Gargano (Hevi-Karaoke) on guitar. Hopefully “Heavy-Ari” begins to work on his own material soon.

Sonata Arctica
Despite the merciless sun more people were in front of main stage than the night before for Type O. And as if it wasn´t hot enough yet, the Finns had to add fire and bomb effects… those would not have been necessary, as the active front man Tony Kakko and his guys handled the audience well right from the start. Guitarist “Enska” Elias Viljanen – replacing Jani during his army service – received extra cheers, as he is from Tampere. They played e.g. „In Black & White“ from the new „Unia“-album, „Fullmoon“ wasn´t left out, and neither„Victoria´s Secret“ and „Talullah“. Their wicked humour broke loose in the end with „Wodka, we need some Wodka“ played faster and faster – great!

Swallow The Sun
A band with a certain addictive factor – you can see them often but still cannot get enough… despite some initial sound problems “These Hours Of Despair” and “Too Cold For Tears” were delivered well. Unfortunately not more than a handful of songs fit into 40 min, mainly from the new “Hope” CD, and again with guest singer Tinuviel at “Don´t Fall Asleep”. The classic “Swallow” rounded off a great gig.

Dark Tranquillity
Those Swedes rampaged on stage as if there was no tomorrow, singer Mikael Stanne hardly ever stood still, made faces and other crazy fun stuff. And he could not avoid mentioning the heat… They opened their set with “The Lesser Faith” from the new album “Fiction” and continued with classics like “The Treason Wall” and “Poison Well”, therefore mixed old and new material quite well. Those Melodic-Death-crazy Finns naturally cheered to this excellent performance.

Sabaton
In a crash-course those Swedes learned at least to say “cheers” in Finnish (= kippis) and entertained the crowd with their Folk-influenced 80s Metal. Quick songs like “Into The Fire” – with great harmonic chorus – would have suited old Judas Priest quite well.

Heaven & Hell
A band that also many musicians had been waiting for, basically Black Sabbath in a classic rare line-up: Toni Iommi, Geezer Butler, Ronnie James Dio and drum legend Vinny Appice. And it began splendidly, with “Mob Rules”, “Children Of The Sea” – according to Dio the first song they wrote together – and “Sign Of The Southern Cross”. Those gentlemen have aged, but like Whiskey just to their improvement. A massive sound, a massive show (decorations changed) and a very active front man who conducted the masses. And masses indeed, the area was filled as never before…

It was naturally the Doom audience that appreciated most those slow heavy riffs, and “Die Young” and the name-giving song, and here the chants from the crowd were even louder than the band. A certain 70s feeling prevailed, just like on “Live Evil”, ten minute-soli and medleys where the “Heaven & Hell” theme re-occurred. But no hit from the Ozzy era, like “Paranoid” or a Dio song. The encore “Neon Knights” ended a legendary show and the Sauna festival…

Summary: Great bands, great line-up, and you have a chance to see every single band, provided that after three days of merciless heat you still have the strength, and not too many blisters on your feet. Yet this festival should be a must in your holiday planner! 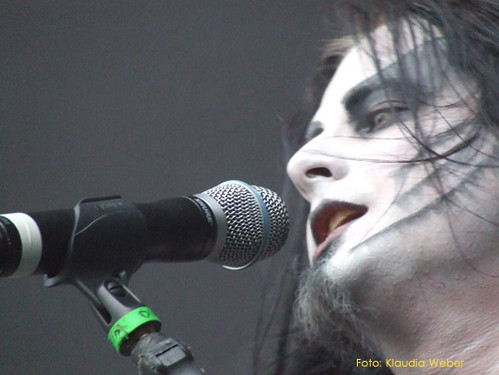