Despite headaches from the event in Villach the previous day I went to Hell Over Vellach near Mallnitz, Austria. A few bands like Hope U Rot (HUR) or Hawkstone were at the venue which gave the opportunity for a chat. What a surprise, also HUR´s Kathe suffered from headaches. I would have been evil not to offer him some Asprin. Even during the soundcheck of HUR I noticed the excellent sound quality, and a camera device signalled that there would be a DVD of this show.

It started with Shadowcry who I did not know but the singer looked familiar: He turned out to be Tom, the singer of Lionhead who played the day before at Metal Mania. As I did not like Lionhead too much I had low expectations for Shadowcry, but surprisingly they should teach me a lesson. They play Melodic Metal, not dominated by keyboards but by two guitarists who compete with each other. The singer has a flexible voice that manages rough and powerful as convincing as clean vocals during quieter parts. The female bassplayer impressed with long (very long) hair, otherwise seemed a bit disoriented on stage. For their first show this band received a lot of reactions from fans at this early hour, and when they played a Pantera cover as encore the crowd went nuts.

After a lenghty break Hawkstone entered stage, a very young band who covers pretty much every Metal genre: Death, Melodic, Thrash, everything is there. The four guys from Obervellach (Austria) had to struggle for those fans who cheered to Shadowcry before. Singer Podi tried to lure them back to stage with announcements, but nobody followed his invitation.

Madog who were next on stage are definitely the Power Metal band Nr. 1 in Carinthia (Southern Austria). Their sound did not quite fit into this rather rough program. But the band managed to win the audience over, even the toughest Death Metal fan could not help rocking a little bit, with a smile on his/her face. The quartet released a pleasant 80s flair into the hall, and everybody seemed to enjoy it.

Hope U Rot, who I had seen many times already, played this evening their last gig with this line-up. Drummer Kev will start studying in Vienna (nutrition sciences) and hence leaves the band. HUR already has a replacement with a just 17-year old drummer from Klagenfurt. HUR had in my opinion the best show I had seen so far. Singer Kathe´s growls were lower than ever, their technically well played Death Metal in the style of Dying Fetus also had a good sound – the best “farewell” show for HUR.

Avenging Angels made quite an impression with their two vocalists. The sextet (two guitars, bass, two singers, drums) offered Melodic Death Metal and a good show. The vocalists shared their parts, switching between growling voices and screeching.

Finally at midnight the headliner entered the stage: Debauchery. With blood on their faces and clothes, like a butcher right from work, the band jumped on stage after a short intro. After the fist song the vocalist invited the audience to come closer, and he said that they had come directly from Hamburg, about 1200 km, without any stop to this venue (good job). After that had been settled, the bloodshed continued. Singer Tom, wearing a bomber jacket, growled with all his might, and all musicians behaved like professionals, they posed and made faces for the cameras. I had my share of blood, too, being as photographer at the very front. Finally the band also fulfilled demands for an encore, yet after the singer put off his jacket that proved to be too much.

Summary: Hell Over Vellach, that was organised for the second time, can only be recommended. Technically the light- and soundquality was excellent (cheerz to the tech guys), moreover, beer and food was cheap. Every Metal fan could find something for his/her taste, Thrash, Death or Power Metal. The only problem was the heat in the hall, you had to get outside from time to time just not to faint. Still I will be there again next time. 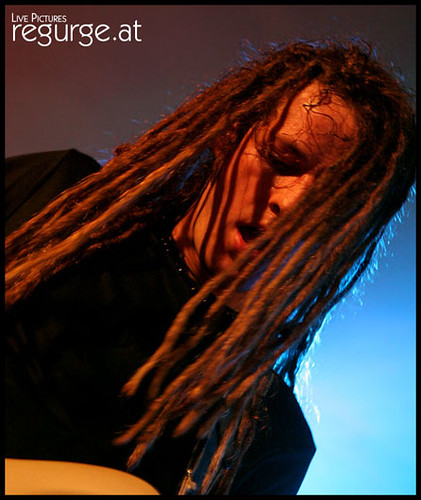