“If you continue eating like this you´ll never become a beautiful person!“ This was right at the beginning of the festival, one of the very few negative moments about to occur this especially beautiful weekend. A shaggy woman far beyond her 40s thought she had to comment my pizza consumption (but I kept the second piece just for my friend Frank who was on the way to get some beer…)

Interactive photo gallery at the end of the text
Apart from this encounter of a third kind the festival started Friday as planned and according to our preferences. After a pleasant journey by train from Hamburg to Münster and a rather unpleasant one-hour trip by slow local train to Gelsenkirchen we arrived early afternoon at our hotel, checked in and relaxed on the patio to enjoy our first beer. The same with BOLT THROWER who had arrived earlier and just preferred Whiskey-Cola to beer.

After these refreshments we approached the festival area. Quite quickly we received our tags and went inside. We met some friends and peers and were welcomed by Götz-„are you ready to die for Metal?“-Kühnemund, then ENGEL (SWE) opened the festival on the small stage. The “hungry” crowd there received the mix of Linkin Park and In Flames warmly and initiated the first head banging craze.

After those 45 minutes of noise we waited for our first highlight – CUSTARD(GER)! As always in good mood, the fronter was ready to give everything, ripped the cable from the mike and dropped on stage at the third song. But that couldn´t stop his jogging across the stage and spreading fun. Stomping drums and catchy tunes appealed to the headbanging crowd. And if the singer tried to hold high notes longer (he can do it!) a sudden break-through in the Melody scene should be possible.

The next band MERCENARY (DK) had to play without our full attention as we needed time to recover from the CUSTARD gig.

And they attracted a notably bigger crowd than the first three bands. The Swedes played a sovereign show and left only happy fans behind who continued in the Metal tent. Around 03:30 h we were quite exhausted and returned from there, „Fear Of The Dark“ or „South Of Heaven“ ringing in our ears, to the hotel. This young lady that had fallen asleep during her… business… at the fence could not be found again next morning…

Saturday started with a hit right away. The newcomer band MYSTCIC PROPHECY (GER) pleased our ears with refreshing and excellent Melodic-Metal.

Especially remarkable the drummer who must be a paladin of drum-god Mike Terrana (which is meant as a compliment!).

The next hit was about to follow – for us unexpectedly – right away. LEGION OF THE DAMNED (NL) smashed our heads for 45 minutes with Slayer-Riffs so that you almost lost your senses, but it was fun!

A real fantastic act! Surviving such a riff-Inferno we had to recover, therefore we cannot really comment on PRIMORDIAL (IRE).

After that the Hardcore influenced CALIBAN (GER) pleased the audience.

A lot of jumping and moshing, a Circlepit was formed and caused at least one injured knee (we had to get the ambulance for the young banger).

BRAINSTORM (GER) offered another share of well-known Melodic Metal.
Their nowadays rather massive fan basis cheered to the band who indeed deserved it.

NEVERMORE (USA) always seem a bit weird – especially the singer – and didn´t perform their best gig at this Rock Hard Festival, but especially NEVERMORE are a matter of taste.

And perhaps we were already too focused on our personal faves – SODOM (GER). And we were not to be disappointed.

Despite the number of new songs in the set (which isn´t bad, basically) the atmosphere was great from start to finish, and the Pyro-show added to that – Frank still has noises in the ears. Naturally all-time faves like „Remember The Fallen“, „Ausgebombt“ or „Bombenhagel“ were part of the program. The loud demands for “Encore!” should cause a surprising effect, but more later…

The crowd waiting for the next act received a special surprise. Götz Kühnemund in elegant suit and Frank Albrecht on bass revived RANDALICA (GER) with „Tote auffe Tanzfläche“. But they played only two songs to a highly inspired audience that waited for the next highlight.

Right after a sovereign SODOM gig and this RANDALICA surprise expectations were high, but BOLT THROWER (GB), revived and as powerful as in the good old days, managed to convince the crowd easily.

Their Whiskey-Colas they had the previous day didn´t cause any side-effects, and the Brits performed with full commitment.

And then it was almost midnight, and the audience had to receive a bitter blow (or not?) This night´s reported headliner CELTIC FROST (CH) had to cancel because of health issues (their singer himself brought the bad news), instead SOLWORK (SWE), who had just arrived, played three songs.

After that the fans were delighted to see SODOM again, followed by ONKEL TOM ANGELRIPPER solo with his well-known dringking- and party songs. Therefore the first disappointment had a positive ending …

Sunday started with a nice wake-up call. CRUCIFIED BARBARA (SWE) displayed a lot, and not only on their instruments… they played straight Sleaze Rock, which appealed to the early morning crowd.

The most positive surprise followed right away: A band formerly completely unknown to us, VOLBEAT (DK), indeed rocked the house!

The singer looked a bit like Elvis and offered a great convincing show with Glen Danzig-voice and devotion. Innovative arrangements and great Rock´n´Roll truly kicked ass.

Exhausted after this super performance we chilled during GOJIRA (FR), because after that we had to be fit for Tim „Ripper“ Owens. With his new band BEYOND FEAR (USA) the Ex-Judas Priest-Frontshouter confused us with Hardcore Basecap outfit and huge black glasses, but he made it up with his well-known stage acting and his great voice.

The band – created like: we have to build up something around a Rob Halford-voice – didn´t really offer anything new.

EVERGREY (SWE) were missed due to a break, but we had to check out FINNTROLL (FI).

The Finns´ peculiar style was well-received in Gelsenkirche, this mix of Folk and Death Metal with a new frontman kicked ass once again.

After that the warriors of SOILWORK (SWE) made it clear who rules modern Metal (not Nu-Metal!) and is the real number one now.
Double-Bass thunder, many rhythm changes, powerful melodic vocals and catchy riffs with a lot of melody, that hit again a bullseye.

Another convincing act: FATES WARNING (USA), but who had heard the Americans before knows that this is a more demanding genre of musical enternainment; ever-changing rhythms might have been a bit stressful for the not so devoted fans.

But then it was time for the uncrowned kings of this festival – EDGUY (GER)!

Although I am not such a Die-hard-Fan (still I got all their records), I have to admit that the always cheerful Combo from the South had made a huge step forward and performed as a worthy headliner. Musically and vocally EDGUY live have always been convincing, but they actually made their performance in recent years absolutely perfect. Whether David-Lee-Roth-jump from the drum pedestal or fantastic stage-acting by the whole band, EDGUY was truly fun!

Reading this you might think this was it – but wrong. The festival was topped by our most favorite Rockgranny, err Rock-grandfather, DIO (USA).

And there is not much to add to this. Good old Ronnie James performed, as usual, a perfect gig, didn´t omit any of the classics and convinced fully once again. A worthy finale for a worthy Metal God!

Next morning we had to leave our hotel way too early and travelled back to Hamburg. During the trip we talked about the festival und decided then already to come back next year! 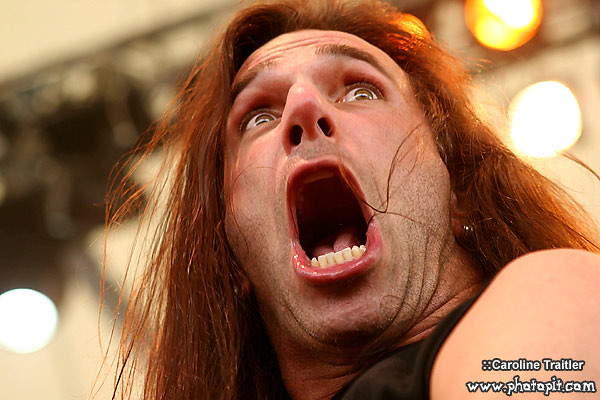 SISTER SIN : “Follow what is right in your heart!”

YOU GOT STALKED: Avantasia – The Mystery of Time Tour