w/ Michael Monroe, The Local Band, Lost Society, 10. 6. 2018, Kaisaniemi Park
Wow, what an event! Therefore we simply have to feature it somehow although we had attended without press status… I even managed to get to the kick-off (almost) punctually, with  Lost Society. Those guys have grown from completely insane teenie rockers into – well, totally insane mature performers who can easily entertain an arena. It does not matter whether they give us their high speed early Thrash or a more grooving more recent material like  “I am The Antidote” or the title track of their last output “Braindead”. Samy Elbanna put on a great show once again, the only disadvantage this time: Perhaps 1/3 of the potential audience had arrived and did not pay much attention to the stage yet … but now to my colleague …
PHOTO GALLERY HERE

The first band for me today is The Local Band. For those not knowing who they are:  Jussi69 from The 69 Eyes on drums, Archie Cruz from Santa Cruz on bass, Alexi Laiho from Children Of Bodom on Guitar and Reckless Love frontman Olli Herman on lead vocals. Like today’s headliner, they are a cover band, but most of all, these are best buddies having fun with their mutual love for classic rock. And having fun is what those guys do most definitely here. We get to hear songs from Poison, Van Halen and Guns’N’Roses among others. Of course it doesn’t take long, before Olli takes off his shirt and presents us his well trained body. In between, for the song “Untouched” Olli leaves the microphone to Alexi and Archie and goes backstage to “apply some nail polish”, as he says. The show starts and ends with Bon Jovi, and during the final song Living on a Prayer the crowd is gone wild. 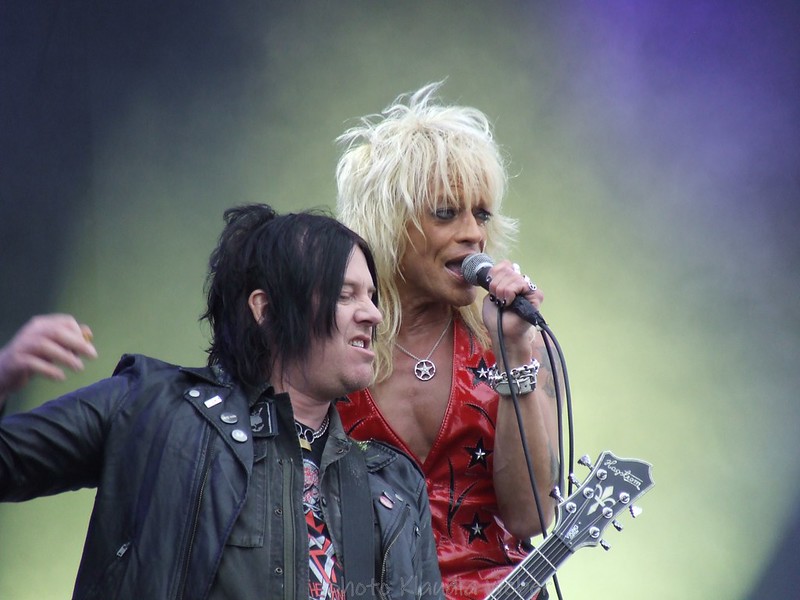 After only a short while another great artist enters the stage, Michael Monroe and band. I haven’t seen them in quite a while, but Mike’s enthusiasm and energy on stage hasn’t changed a bit. I think I know, where from Olli Herman learned his kicks on stage. Between songs like “Ballad of the Lower East Side” or “Old King’s Road” Mike is balancing on the fence between the crowd, jumps back and forth between all kinds of boxes and equipment and climbs up the stage. I wonder, has he heard of wireless microphones, because he gives the poor guy watching over the cord of his mic a hard time untangling it over and over again. The crowd goes wild, especially as he asks “How about some good old Hanoi Rocks?”, followed by “Don’t You Ever Leave Me”. This guy has some crazy amount of energy, that I would love to have for just one day. The show comes to an end way to soon. But not yet really. After some few minutes Mike comes peeking from the left side of the stage, and it takes a minute, before folks spot him standing there, grinning. “I think we have a couple of spare minutes, then we can just as well do another song!” What a show! Can anyone top this now? It seems hard, but yes, they can, and after some half an hour, here they are, the ones everyone has been impatiently waiting for: 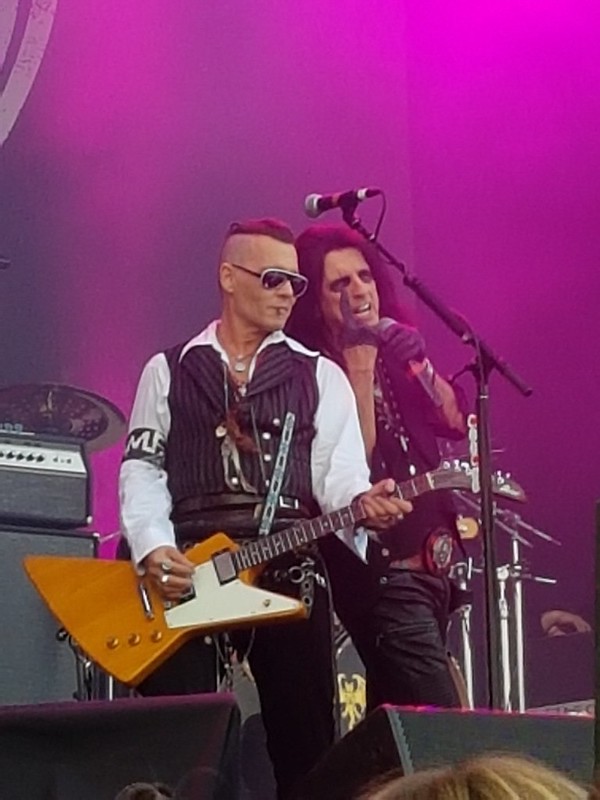 Alice Cooper and Johnny Depp come walking in after everyone else has taken their spot already, and especially in the front, earplugs are necessary now, because the air fills of (mostly female) screams.
There had been rumours lately of Johnny Depp looking sick or too thin, but I can only assure you, he looks more handsome than ever. Well rested despite the busy tour schedule, and he is all smiles and interacts with the crowd by blowing kisses, thanking, bowing, or just nodding and smiling throughout the entire concert.
Alice Cooper is the only original Hollywood Vampire here, and boy he is kicking ass. It’s hard to believe, that he just turned 70. Cooper runs up back and forth on stage, changes several times from leather jacket and chains, top hat, a white shirt with blood stains to some kind of circus director jacket. and throws his stick a couple of times into the crowd. The set list consists of some 19 songs, mostly covers of course, but some originals as well like “Raise The Dead” or “My Dead Drunk Friends”. Cooper is mostly on lead vocals, but “Ace Of Spades” is sung by Chris Wyse, coming quite close to the original, “Combination” by Aerosmith is sung of course by Joe Perry, and two songs has Johnny Depp on lead vocals, “People Who Died” and the beautiful “Heroes” by late David Bowie. I’m sure he smiled up there in heaven hearing it, and I guess I am not the only one thinking, that Johnny should sing more often, his voice is amazing.
The encore is “School’s Out” by Alice Cooper with elements of “Another Brick In The Wall” mixed in it, and the crowd is absolutely going crazy now, and some are even dancing on the tables. When it’s time to gather and bow to the crowd, all of a sudden Johnny Depp is gone, and a puzzled Alice Cooper goes searching for him, to find him dragging Mike Monroe to the stage with him into their ranks. Mike sings some few tunes along and bows with the Vampires to the crowd, before they all disappear, to jump right back onto their charter plane right away towards their next destination.
What a night!