For the 8th time the metal family met at the probably cosiest European Extreme-Metal Festival in the Austrian alps, where many top-acts made the hot air even hotter, thirsty throats even drier and neck muscles aching even more.

THURSDAY July, 15, 2010
Even during the trip we realized – it´s going to be a hot day, as in the early morning we already had about +30 C. After the first thunderstorm was over, we approached the festival area, where after a pretty draining start with Brewed & Canned (only 5% of festival visitors present, but humidity 100% and only average sound), Heathen Foray (too one-dimensional) the first not unexpected festival highlight was due with Mastic Scum. The death act from Vienna entertained the hungry crowd with their numerous hits. After that Infinity offered elevator music in “Panda bear” attire, I don´t remember much except the singing drummer. The unspectacular death metal of Funerus was accompanied by tender rain, I have my doubts if their long trip from the US was really worth the effort. Competent and delightful as usual: were the Greek thrashers Suicidal Angels.

Dutch God Dethroned seemed to be the headliner of day 1 for many fans. Those death metal veterans fronted by singer/guitarist Henri “T.S.K.” Sattler have been around for 18 years and neither disappointed with their material from the new CD `Passendale` nor with their performance. I didn´t really pay attention to Incantation from the US, but I heard later that I didn´t miss much.

FRIDAY July16, 2010
Shady spots remained favoured, only a handful dared to fry in the sun = stand right in front of the stage, which was the usual scenario throughout the day, although Varulv did their best to chase away the sun with their sound. A rather weak performance by St. Pölten´s Deathmetal-Combo Epsilon might have been caused by the heat. Grind from Carinthia was offered afterwards by Distorted Impalement, followed by Blackmetal with Azahel’s Fortress whose singer paid more attention to his hair style than the music. Grind again by Sanatorium, and then for many the first highlight: In Slumber. The Austrians around fronter Wolfgang Rothbauer proved once again that in this country you can indeed rock, and even without „Stars“ in the line-up. Keep it up, guys! Pagan act Riger is probably way past their best times and hardly impressed anybody.

‚Priest‘ Martin Schirenz entered stage afterwards with Hollenthon, one of those acts that is always a pleasure for eye+ear, as well as Swedish Viking-Metallers Månegarm It seems that Thrash-Lady Sabina Classen doesn´t age at all, the Holy Moses Shouter appealed with her charisma, and musically the German Thrash-legend stuck to their old style, why change a winning sound. The controversial Show of Swedish Shining offended many, because fronter Niklas Kvarforth illustrated his music with both blood and vomit. Dark Funeral played rather traditional Black Metal, a great gig followed by Co-Headliner Asphyx. Those Dutch Death Metallers with Fronter Martin van Drunen seem to be one of a rare reunion band that really work, because they didn´t just do it for the money – a respectable gig.

SATURDAY July17,2010
Unfortunately we missed e.g. Erebos and the biggest part of Obscurityand instead heard Czech screech-act Fleshless. Yet they could not impair the pleasure with the following Thrash-Deathers Darkfall. It was great to see this act from Graz, AUT, with singer / KOA-co-promoter Thomas ‚Spiwi‘ Spiwak once again live on stage. Skilful instrument handling and a crazy ‚Lady Gaga – Pokerface‘ Cover made them afternoon-Headliners. The Folk-Deathers Skyforger from Latvia impressed this time also with their performance, but Martin van Drunen´s second Band Hail of Bullets was in my opinion the KOA highlight. The tough Death on CD wasn´t too convincing for me, yet live I was simply blown away by the power, great vocals and a pretty perfect sound!

Darkane from Sweden rather strained my nerves, before Keep of Kalessin proved to be another Highlight. The Norwegians offered rather simple-structured and therefore catchier new songs, but that´s not a bad thing at all. Not quite my thing were Aborted, followed by Primordial. A great gig that was even visually enhanced by nature – an approaching thunderstorm, rough winds and sheet lightning, simply impressive. And right with the final headliner we got something that is hardly ever missing at any KOA – rain, or better, a rain storm reduced the Dying Fetus audience to a small but very dedicated crowd.

Finally we have to thank the KOA promoters once again, it´s absolutely impressive what was done here, and for many Austrians it´s the highlight of the festival season. Keep it up guys, whatever the future might hold … 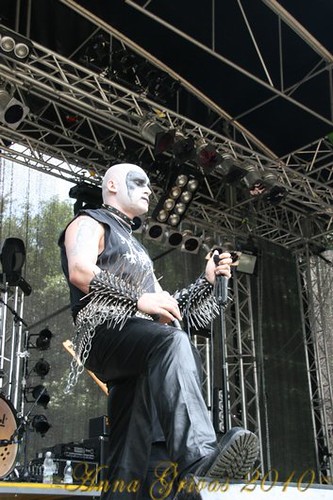 My Own Ghost / Sorrownight / Barmy Rote

Dead by April: The best behaving band in the world?