Norway´s annual Inferno Metal Festival has blackened the streets of Oslo since 2001. Unlike 2010 the weather was warm and sunny this year, summoning Norwegians out of their Easter caves to crowd the beautiful parks and laid-back cafés of Oslo.

The line-up consisted of 50 bands from 14 countries. The main stage Rockefeller has a capacity of about 1500 and the smaller one John Dee downstairs about 400 people. Rockefeller is spacious with the stage/expo/tattoo floor and two balcony floors, all with good sound. An open air roof terrace is the place too cool down between the shows and this year it was even possible to enjoy the atmosphere of this extreme metal celebration sipping Wongraven Alleanza Langhe Rosso red wine, blended by who else than Satyr himself. The fact that a pint of beer or a glass of wine costed 63 Norwegian crowns, meaning more than 8 euros, made you sip your drink sophisticatedly, unlike to Finnish style.

Inferno Music Conference IMC was again part of the festival and took place at hotel Royal Christiania. There were seminars and workshops about business (Michael Berberian – Founder of Season of Mist Records), songwriting (Satyr Wongraven), extreme metal guitar (Gildas Le Pape – Satyricon, Spiral Architect) and extreme metal vocals (Enrico “H.” Di Lorenzo – Medicine Doctor, Phoniatrician, Hideous Divinity´s vocalist). As a bonus Satyr Wongraven presented his wines at an informal tasting and of the traditional “special guests only” black metal bus sightseeing there was also a trip open for everybody this year. A festival pass costed 180 euros and IMC pass 49 or 99 euros depending if you were a musician or not. The wine tasting and bus sightseeing didn´t include to IMC pass.

A brand new great festival addition, Inferno Film, took place at Cinemateket the Film House presenting mainly Norwegian horror films and documentaries on metal music. There you could get a discount on tickets with Inferno pass. (MT)

Our plan for the club day was to go and see Alcest at Rock In, one of Oslo´s most popular rock/metal bars. I had been expecting to see this mysterious French band live and was convinced about its charm already in the beginning. The set consisted of both new and old material, style varying from black metal to shoegaze, as their music has often been described nowadays. The man behind Alcest´s sound is sympathetic frontman Neige.

Rock In was totally packed. Somebody unlucky managed to pour my drink on the table but I didn´t let the accident ruin the atmosphere. Alcest was playing and that was the thing to focus on now, even the temperature kept rising to infernal degrees. Despite all the sweat and claustrophobic reactions of the crowd Alcest gig was one of the most beautiful experiences during this year´s Inferno. (MT)

It goes without saying the following phenomenon climbing on the stage of Rockefeller was one of the most awaited acts at Inferno 2011. I had been hoping to witness a Dødheimsgard or DHG show for many years and tonight my expectation was rewarded with a vibrant show. The furious and artistic body paint worked well with strong coloured lights and I have no complains about the sound either. The large audience bursted into cheering when the first notes of legendary 666 International album´s hit song Ion Storm were heard. Brilliant performance indeed. (MT)

Norwegian Nidingr attacked John Dee audience with bluster. I hadn´t heard much about them before and was positively surprised. Famous names such Hellhammer and Teloch affects in the group and when listening to them you can hear the experience. Soundwise the show was so good you could close your eyes and simply enjoy the music. Nidingr deserves all recommendations for sure. (MT)

Mine and other audience´s waiting was repaid when Aura Noir took the stage. The atmosphere was really good and playing and stage show filled all expectations. Before Black Trash Attack in the middle of the gig, Aggressor came on stage. In addition to charismatic Apollyon, a special mention considering playing and performance goes definitely to the drummer. (JL)

Voivod
At midnight Canadian Voivod performed at John Dee. The show was definitely
one of the highlights of the festival. Singer Denis “Snake” Bélanger got a grip on the wild crowd throughout the whole gig and the atmosphere approached a very liberated punk trance. The most memorable song was definitely Sun Goes Down on You. John Dee was certainly a good place for the band due to its intimate nature. A great gig indeed! (JL)

Forbidden
San Francisco Bay Area trash metal group Forbidden closed Thursday night with quite a surprise: awesome Gene “The Atomic Clock” Hoglan on drums! I hadn´t heard or read anywhere he was about to play until seeing him there at spotlight on Rockefeller stage. Mr. Hoglan has been working with Forbidden also before and this time he was filling in for Mark Hernandez, who had to skip Inferno due to “a personal family obligation.” All in all the show was gripping, although I couldn´t help staring the drums all the way through the set. Hoglan´s drumming is absolutely absorbing. (MT)

Whole week´s most luminous performer´s title goes without saying to Djerv´s singer Agnete Kjølsrud. Her clean and versatile voice and really present performance leave even better players in the background. The audience was pretty lame in the early evening but many had come to see the gig which certainly left no one cold. (JL)

Astaroth from Oslo took over John Dee with their traditional sound spiced with fiendish vocals. Their music wasn´t for me, at least not this time of the day. The majority of the crowd was only warming up or in need for a break to digest Djerv´s and especially Agnete Kjølsrud´s performance. There was a bunch of fans around who seemed to have a good time but I felt the bond between me and music remained distant. (MT)

Early Friday night continued upstairs with surprisingly good sludge metal of Louisiana based Soilent Green. Their fascinating music combined to an intense live show made the experience highly enjoyable. Acts like Soilent Green are always welcomed additions to festival line-ups consisting of several theatrical groups. Inferno festival was a part of Soilent Green´s European tour with Today Is the Day as a supporting act. (MT)

Today Is The Day

Nashville group Today Is the Day´s show was pretty good, but didn´t make a very memorable impression. The audience had clearly been looking forward to the gig and the bass player gave everything on stage. The drummer´s playing was really tight too. (JL)

Atheist, also from the USA, left no one cold for sure performing on the big stage. The charismatic performance of Kelly Shaefer made the crowd go wild and the band played and performed with an incredible intensity throughout the whole show. (JL)

The festival audience´s waiting was rewarded when the Immortal show finally started on Rockefeller stage. Immortal filled once again everybody´s expectations, including me, and the atmosphere was intoxicating. Pyrotechnics suited well to the venue. (JL)

Sunny Saturday begun with a cheerful walk to Rockefeller. Florida´s Malevolent Creation had already played a while when we reached the venue. During the rest of the show my main focus was on photographing since I had seen the band live a short while ago. They are very assured live performers and absolute professionals on what they do but at the same time their shows might get slightly boring after a few songs, especially if you´re not a big fan of Florida death metal. Malevolent Creation has an impressive former members list but they´ve stated having now a most solid line up in years. According to the band their new album is without a doubt the most relentless, focused and brutal Malevolent Creation album ever. “We really went back to our roots, not only as a band, but as fans of metal. We wrote an album of songs that we as fans of brutal music would want to hear.” (MT)

The doom metal pioneer Pentagram had a fantastic gig at Rockefeller. The legendary
singer Bobby Liebling´s microphone was, however, too quiet, but it didn´t disturb much.
Band´s playing was tight. The guitarist and the drummer were absolutely in the groove. (JL)

Back downstairs Danish Illdisposed was ok, but not really my cup of tea. Despite an impressive number of studio albums and a history dating back to 1991 the group seemed relatively inexperienced on stage. Anyway, the audience seemed to like the show and the band played very well. (MT)

The long-awaited appearance of Napalm Death met all my expectations. The audience was wild and there was a large moshpit in the front. The grindcore pioneers´ gig at Rockefeller was definitely an excellent choice by festival organizers. In particular, the comments between songs considering for example the value of human life warmed the listener. (JL)

Despite the fact that some people might consider Norway´s Urgehal relatively humorous with heavy chains, brutal face painting and festival´s longest spikes they´ve got that something which lights the spark inside you. I felt that their old fashioned yet personal sound wrapped me into music. Urgehal was a perfect choice for closing act at John Dee and was greeted with a large audience. All in all the show was a rewarding experience. (MT)

The last performer of the festival, Swedish Meshuggah, was stunning. Despite been raged for many days already the audience gave the band a warm welcome and the gig was incredible. A special thanks for wonderful stage settings that increased the atmosphere of Inferno´s magnificent last gig. (JL)

Summary:
Rockefeller is a good-sized main venue for Inferno type of festival. Despite high crowd capacity the atmosphere remains intimate and overcrowding doesn´t occur. An especially nice thing about the place is the roof terrace, which provides food and drinks. Although the event is expensive, I recommend it to all metal lovers. (JL) 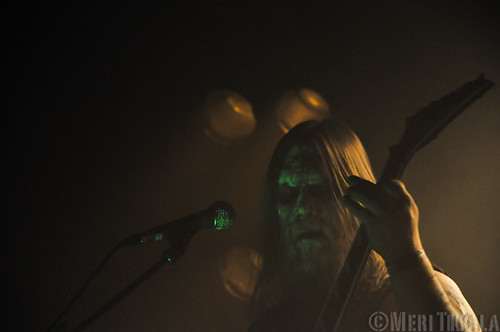