Such things can happen: although the Swedish band Machinae Supremacy had been around for a couple of years and albums, it was their latest release “Rise of a Digital Nation” that raised my attention, so that I had to check them out when they played in Helsinki, even on a Wednesday…

In the meantime most clubs in town start their program earlier during the week, which I appreciate as I don´t have to hurry to catch the last tram, bus etc afterwards. Not sure if the locals haven´t got used to it yet or if there was much disappointment that the scheduled support Kill The Romance had to cancel due to health reasons (so I heard) – it turned out that the short-term replacement Mysore from Turku – a supposed Metalcore band – faced a rather small audience of maybe 50 people when they started.

Despite their energetic show and addressing people in front of the stage now and then, the guys struggled to animate this Zombie-crowd. People were interested and applauded afterwards – but that was pretty much it. The music was fine, rather Melodic Metal with Industrial-Core elements (good, because I don´t like Metalcore). Sometimes it sounded a bit like Nightwish-meets-Limp-Bizkit… Shouter Mika Pääskynen managed the double duties of growls and clean in a live situation quite nicely, only occasionally the clean voice sounded a bit off. The guys blasted material from their latest EP (r)Evolution and older songs into a slowly increasing crowd, and towards the end of their 40min set they finally got the attention they deserved. Even a moshpit formed, but it was short-lived. Summary – cool band, uncool audience.
Setlist (e.g.):
Cameo Role
Serotonin
The Next Stage
Lost
Time Machine
Once Destroyed

In the quick break the situation in the club finally resembled my expectations: a queue in front of the entrance, and at the bar; Nosturi filled up quite quickly and the mood had much more the air of excited anticipation. No wonder that just the first notes of the CD intro set the fans on fire…

Machinae Supremacy
came, played and conquered … how to describe it in other words than “triumphant success”. Even somebody who saw them for the first time could not resist and had to join in… Pure ear candy non stop, the band members turned out to be very active and likeable, staying in close contact with their audience. It was obvious how much fun they had to be on stage. Near perfection in terms of sound and performance; Robert Stjärnström turned out to be a great singer and cheerful entertainer.
The crowd didn´t require any invitation to sing or clap along – a sea of hands almost throughout the show… and also on the balcony and in the back of the bar area people were banging and raising their fists. Those elements that I found a bit irritating on CD first (this Casio-computer game noise) made much more sense in such a live situation. Only when compared with the new stuff, the old material appeared to be less refined, at least in my opinion… too much game, not enough song. As the program focused on the new CD I have no reason to complain and can just recommend to check out those guys and their touring schedule – now they are heading to Russia. Or buy the new album. Or better, do both…

The Anatomy Of Frank: “There are songs that have made me see the world differently” 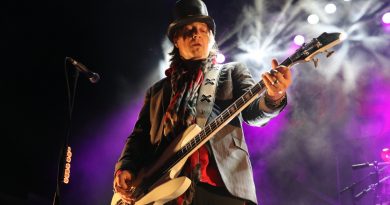 ANDRE MATOS: “I try to open people´s eyes and ears to reality”