During the „Down by the Laituri“ Festival in Turku most local clubs also want to offer nighttime entertainment, that´s why you find a lot of music events that last until the early morning.

We decide to watch Hairspray Wonder Reckless Love! No other Finnish band is more Kitsch and still entertaining like those four. Unfortunately they play in a club which was not suitable for such a concert or the masses of people that gather after a festival. The Apollo Club in Turku has sound and stage problems, the stage in one corner is way too small and the band can hardly avoid to be in close contact with the audience, whether they like it or not. And when a band is quite popular already, it could be a recipe for disaster, but this night the audience can luckily behave.

You´ve got to admit that Olli, Pepe, Hessu and Jalle always deliver a great show, also this evening. It is important a band gives you the impression that they have a lot of fun on stage. And Reckless Love always give the impression that there is absolutely nothing they would love to do more. This is why the audience enjoys the show – much better than you watch a band which obviously just does a „job“ and feels bored with it.

But those guys shine on stage – well, it´s a must for their kind of music. The tightly crowded Apollo club is rocking along right rom the first second, and the mainly female audience was singing along with „Hot“, „Dirty Dreams“ or „On the Radio“ – a great setlist. The guys´ poses might look sexy to some people, but for me it´s just entertaining. Olli´s hip movements always make me smile, because it´s simply „too much“. Also Jalle and Pepe know well what to do to get the girls in the front rows scream. And in which band the drummer attracts almost more attention than the rest of the crew? Only Reckless Love, even when it´s dark you can still see Hessu smiling. For some it´s too much Kitsch, the others just cannot get enough – this is what those guys represent, and they do a good job.

Towards the end of the Gig Olli struggles with his voice a bit, but he is hanging in there although sometimes a note is slightly off. But once again you got to say that Reckless Love are top entertainment, a great act you should not miss and which guarantees you go home with a smile on your face. And this is what I appreciate most! 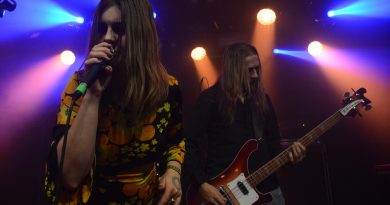 Jess And The Ancient Ones, Tomi Puukko @ On The Rocks