This evening offers another sold out Z-7 and a mix of Finnish Power Metal, Scottish Pirate- Metal and Swedish warriors, namely Sabaton, who have developed from a support act to a well-booked headliner since last year.

Thaurorod
The guys and the lady from the outskirts of Helsinki are on first, the last time I saw them with a different front man who added something special to the music in opera style. I have to admit I was a bit sceptical if this new vocalist will have the band sound as unique as last time. But the first tones convinced me i, and it seems, also the audience, won over immediately by Markku. He had no problem to complete the fast guitar riffs and the keyboard sound with his powerful and flawless voice.

The band had no problem to get the audience excited and received a lot of cheers and requests for encores.

Alestorm
It seems that the pirate fever caused by those movies with Johnny Depp was revived once again by those Scots who obviously thought „why not using it and entertaining all those wanna-be pirates with good old pirate tunes, mix those with Metal and give them something great to listen to“?

Alestorm are indeed unleashing a storm on stage and offer a great show with songs like „Keelhauled“ or the Cover „Wolves of the Sea“, originally a contribution for Eurovision Song Contest 2008 from Latvia. Also from this band the audience could not get enough, but after 45 min the pirates had to walk the planks off stage.

Sabaton
It seemed that the club got a little emptier after Alestorm, but there were still plenty of people inside Z7 to welcome the Swedes with style. Singer Joakim was overjoyed to play as headliner in a sold-out club, and the security was pretty busy with crowd surfers.

The band displayed a lot of fun on stage, and you could hear it,k too. Sabaton gave it all that evening and enjoyed a party with their fans, giving them a lot of encores. 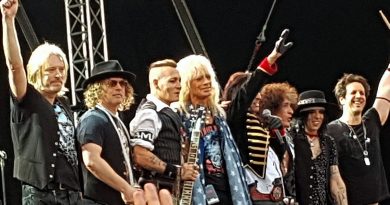