This year’s Ruhrpott Metal Meeting takes place for the second time after the premiere in 2015, it’s an indoor festival taking place in the Turbinenhalle in Oberhausen / Germany. It has everything a real festival needs, including two festival days, two stages (on Saturday only), an indoor beergarden, a metal market and signing sessions. As a said, everything a festival really needs.

The program of Friday evening follows the spirit of the reanimated Headbanger’s Ball. After Nailed to Obscurity and Izegrim opened the stage, Unearth, Kataklysm, Ensiferum and Iced Earth as headliner followed. All in all a nice and versatile program, which I unfortunately have to let pass.

The program on Saturday is also quite versatile, although the focus is on traditional Heavy Metal. This is due to Blind Guardian and Saxon on the Mainstage and Rage vs. Refuge on the smaller stage.

My festival day starts off with Legion of the Damned on the mainstage. The Dutch Thrashers, all wearing identical shirts, deliver a real blast. ‘Legion of the Damned’ opens the set, the hits that follow are ‘Mountain Wolves under a Crescent Moon’, ‘Werewolf Corpse’ (yes!) and ‘Death Head March’. There’s a lot of action on stage, but in front of it there could be more. The reasons can neither be the sound (which is powerful) nor the performance; I guess it is due to the stylistic differences to the headliners.

Another reason is of course the strong competitor named Rage vs. Refuge, who are playing on the second stage at the same time, and where there’s much more audience. Rage are playing today in the lineup featuring Peavy Wagner (vocals and bass, of course), Manni Schmidt (guitars) and Vassilios Maniatopoulos (drums). While I am watching them, the band plays older stuff like ‘Refuge’ and ‘Missing Link’. Although it should, it does not really inspire me, because of the thin sound, lacking a second guitar, and a drum kit that sounds like plastic. The second guitar is especially missed during solos, which is here much more obvious than back then when Viktor Smolski was still part of the band. It also seems that the majority in the audience shares my impression. There is some applase in between the songs, but there is almost no action in the pit during the performance. Inspiration is something different, but I am curious into which waters captain Peavy will guide is ship in the future.

Saxon profit from the fact that they are the first band of the day without competitor. Therefore, the main hall becomes quite full when the band starts its set. At this point I have to ask whether someone has ever seen a weak Saxon-set? I never did and also won’t today. Today’s setlist is as balanced as possible. Some newer songs like ‘Sacrifice’ and ‘Battering Ram’ supplement a best of set. A song I really have to point out is a cover of Motörhead’s ‘Ace of Spades’. Cool! As well as the performance of the band. Especially frontman Biff Byford and bassist Nibbs Carter are cool because they perfrom very energetically and inspiringly. Also cool, but somehow opposite to what you might imagine,  is the performance of Paul Quinn, who seems to have a nap on stage. And cool, again in a positive way, are some fans who throw their jackets on stage. Biff and Nibbs grab one of them each and put them on for the rest of the set. Cool! But I said that already.

At 23:00 Blind Guardian are entering the very minimalistic stage for the performance of ‘The Ninth Wave’. Followed by ‘Welcome to Dying’, ‘Nightfall’ and ‘Fly’ before the curtain falls in the back of the stage, which had covered the back drop showing the “Imaginations from the Other Side” artwork. Just like during  the recently finished Northamerican tour, the band plays today the whole “Imaginations” album. In addition, there are a lot of cameras in front and on stage filming the set. I wonder if there will be an “Imaginations from Oberhausen” DVD soon. After the final track of the album, there are a couple of more songs, what you would expect from the band: ‘Into the Storm’, ‘Time what is Time’, ‘The Bard’s Song’ and ‘Mirror Mirror’. Thus the set is finished and the estimated stage time already 20 minutes overdrawn. But they don’t care because shortly before Christmas, they want to give more, namely ‘Valhalla’ and ‘Majesty’, which were both not on the official setlist. Therefore it is already after 01:00 when the Blind Guardian release the crowd exhausted, but happy into the freezing night of Oberhausen. 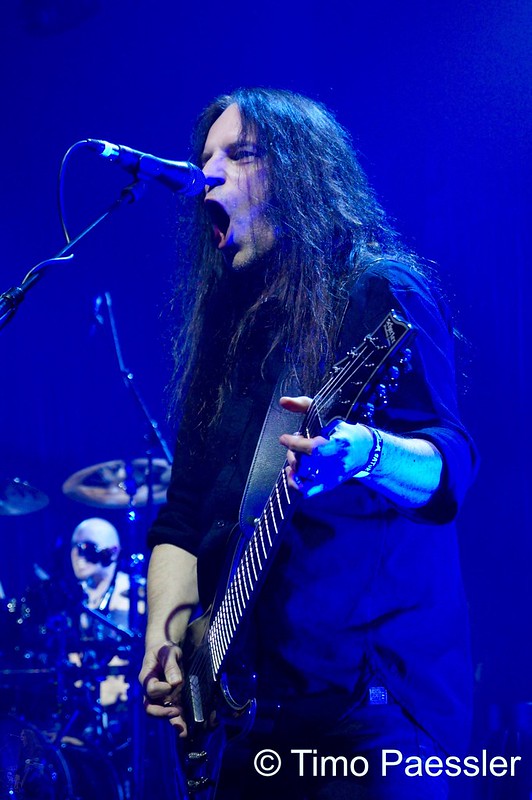