Friday
Punctually leaving Friday morning – check! Sufficient amount of cold drinks packed – check! Shortly before purchasing an overpriced parking ticket in order to avoid annoying tent transport and tedious searching for a place and the same building – check!
Space Chaser are met on Friday afternoon by a one-third-filled Amphitheater. The Overkill-inspired thrash metal also enticed some of the first circle pits of the day already. Quite entertaining, and the Anthrax Cover “Caught in a Mosh” has the semicircle go nuts for the first time.
Architects of Chaos, Ex-Iron Maiden singer Paul DiAnno with his German band, mit seiner deutschen Band, have in the past largely occurred as Iron Maiden cover band and have recently released their first album. AoC renounce largely on Maiden songs – except for the encores – and Paul is also in surprisingly good vocal shape – at least at the beginning of the show. He also interacts very well with the audience and thanked profusely, can however not entirely resist towards Maiden comments. Unfortunately, his voice is suffering more and more, the closer the performance draws to a close and the encore Killers is then actually only a roar. Sad end to an otherwise pretty good show.
Flotsam and Jetsam are next in line and the rows in front of the stage tighten rapidly. The melodic speed / thrash metal can inspire definitely and original singer Eric A.K. and his band can be seen as a highlight of the day. God Dethroned likewise who play their Welcome Back Show at RHF.
Pentagram go largely past me. Although I am a big fan of Doommetal, Pentagram has never impressed me. The largely pink clad Bobby Liebling is funny in any case and it´s grooving pretty nicely. Unfortunately, Victor Griffin is not present, whose solo album I consider pretty cool.
Venom are then, well – not a total loss, but relatively boring. Unfortunately. Because I had been looking forward to their gig already. The stage acting is largely dominated by the guitarist, while Cronos more or less just does creepy grimaces. Mostly stupid ones. What does he want to tell us with his strange midriff top hopefully forever remains his secret. The set list leaves not much to wish for, there are not too many new titles here and when in the end they play “In League with Satan”, you can watch also the author of these lines performing some quite weird and funny moves. 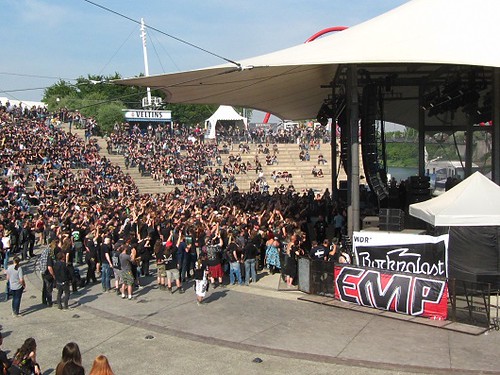 Saturday
Still in the shower – yeayea showering is not Heavy Metal – Idontcare! – I can hear in the distance….. Deserted Fear. Fuck! I wanted to see them, and of course they are already done when I’ve made myself pretty. They were good ….so I’ve heard. Motorjesus are actually always good. I have, I think, never seen a bad performance. Why, however, still they have the afternoon shitslot at festivals, you also need to understand – NOT, probably Label interests and sales figures are taken just a little too importantly here. The guys from Mönchengladbach featuring Andi Brix leave a good impression on the Party Stage and deserve being celebrated.
SciFi-Art Metal by those Franco-Canadians Voivod, who shatter the Theater skillfully in its foundations.
Founded by Candlemass boss Leif Edling, Avatarium has snatched a somewhat undeserved high position in the billing for my taste. Unfortunately, just that person is not present at the RHF. Most eyes are anyway on the enchanting singer Jennie-Ann Smith, although she shows not too much stageacting, but has a spotless stage presence. The crystal clear, dominant voice does the rest, of course, to get the audience under a spell. However, it is also not soo surprising that the theater in comparison with Voivod and Motorjesus is not completely crowded.
Then again more Canadian stuff. Maurizio Iacono and the rest of Kataklysm call to the slaughter and provide with “At the Edge of the World”, “Push the Venom”, “Thy Serpents Tongue” and other titles from almost twenty-five years of existence a spotless soundtrack for massively sore neck muscles. I have never been particularly interested in cds due sterile productions and multiple uniformity in the past, Live, however, it´s nice to the ear. The Crowd Surf factor is as expected also relatively high, but should still be topped this evening.
The Intro to “Arise and Purify” from the album “The Year the sun died” is the start of the Sanctuary show, and as expected in front of a full house. los, und das Haus ist natürlich erwartungsgemäß ziemlich voll. Warrel Dane´s voice is much better than in the past, it seems, though, as if he had fallen into a pot of mascara. The following somgs are “Die for My Sins”, “Seasons of Destruction” and of course the obligatory “Future Tense” and “key Revenge”.
With Doro it´s always a bit tricky. In the media and for the average metalhead, she is mostly present as a billboard and poster child of Metal in general and the Teutons´ steel in particular, her specific articulations are sometimes not for everyone. A “Oldschool Warlock Set” reconciles of course the one or the other previously abusive metaller who as expected soft ballads. In the end the Queen of Metal has left no one in the amphitheater disappointed. I have seen quite a few die-hard Death and Whatverextreme metallers who were banging intoxicatedly to “True As Steel”, “I Rule The Ruins” and “Hellbound” during the tearjerker “Forever” hugging a neighbor, girlfriend or whowever-available. It can not be denied; Doro still got it and it will remain forever our Metal Queen.
During Kreator the crowdsurfer density escalates pretty quickly and Security nearly has to do hard labor. No Wonder! It really is virtually a home game for the guys from Essen. The announcements of Mille have about the same quality level as Doro´s and have been somewhat limited lately. “Terrible Certainty”, “Awakening of the Gods” and “Renewal” are a few titles in the setlist that have not been played by Mille & Co. for quite some time. Very cool! Otherwise, the Kreator setlist is anyway usually beyond doubt and the crowd thanks for it with huge circle pits and massive hair swirling. Could this actually be even bigger without losing credibility? Hard to imagine, and simply a great experience.

Sunday
The Swedish guys Air Raid can not drag quite so many hungover alcohol corpses out of their tents as the openers on Friday and Saturday. Nevertheless, their show can be considered a success. About the band called The Spiders I have never heard anything, let alone seen them. However, the mix of glam and punk rock seems likable, and an extremely handsome singer does the rest.
The Belgians Channel Zero can rely on a loyal fan base in Germany, and so their show is followed by an ever-growing audience under bright sunlight. Cool action of singer Franky, who rises onto the Amphitheater ranks during the last two or three songs, singing from the audience and fooling around with the one or the other fan.
Refuge, or Rage in previous line-up, with Peavy, Manni Schmidt and Christos Eftimiadis, play accordingly Rage material from the period 1984-1994. Since I do not really know much about Rage and I have never really followed their career either, I rather dedicate myself to some cold drinks. But Refuge are still celebrated and the closing title “Don´t fear the winter” I know after all.
You hear “Doctor, Doctor”, and everybody who has been more than two or three times at a Iron Maiden concert expected somehow automatically the British legends. But not here. MSG, oh no. That is to say now Michael Schenker’s Temple of Rock and those slightly matured men are still rocking passionately. Maybe just because they have to live on something, is Francis Buchholz actually still allowed to make money transactions? In any case the former half of the Scorpions plus Doogie White ensures a regular cross-section of each work phase of UFO, Scorpions and MSG. Finally “Rock you like a Hurricane” and no one was injured.
With Overkill a metal festival booker cannot do anything wrong, which is confirmed once again, overkill guarantees rotating hair, Circle pits and raised fists. Although the announcements of Bobby “Blitz” Ellsworth are almost always the same, “we would like to thank for their loyalty” and that he feels in Germany like in his second home, but the audience notices that it comes from the heart and will thank Blitz , DD Verni and Co. by correspondingly violent crowd surfing. In the middle of the set a killer triple of “Power Surge”, “In Union we stand” and in supersonic speed blasted “Rotten to the Core ” is featured. Remarkable also that the “Feel the Fire” album is equally represented with three titles, something that I already experienced differently in the past. As a bonus an equally murderous fast “Fuck you” and “Take on the World” by Judas Priest are played. Cool idea which is thanked with appropriate Overkill chants. Definitely the winner and not so secret headliner of the day.
At the end of the festival it is not really easy for Thin Lizzy aka The Black Star Riders to keep the mood level with their old school Hard Rock. However, the audience welcomes the Irish despite noticeably thinned ranks and cheers through the one and a half hours that are offered by Scott Gorham, as the only remaining original member of Thin Lizzy, and Rick Warwick, whose coolness factor – in contrast to his hard-biker-poser The Almighty times – has doubled.

Dornenreich: Music is the deepest form of communication