An unusually early start for this gig, too, yet for everybody handling a regular day job this is quite convenient. Not least for the band members themselves, as also the French guests Dirge had to get up early to catch a ferry to their next Circumbaltica 2015 tour destination.

Crib45
faced an already pretty full club, and even more people were about to arrive. Well, not much to say about the show except “another great one”, however short, as maybe 4 ½ of their epic songs fit into the support slot. There were even rumours the final “Into The Abyss” had to be shortened … www.facebook.com/Crib45

Dirge
should rename themselves as “Dementors” – those Harry Potter creatures – because the music of this quartet from Paris seems to suck every happy thought out of your soul. A massive wall of evil riffs and sinister growls, powered by a gloomy doomy rhythm machine, just like a flow of lava destroying everything in their wake – never heard anything that nasty, simply great! When you´re not quite in the best mood already, such sound offers something like a catharthic release and even puts a smile on your face. The enthusiastic audience claimed and receivd an encore, and surely Dirge – which I had not heard of before this evening – made it onto my “gotta see them live again” list. www.facebook.com/DIRGE 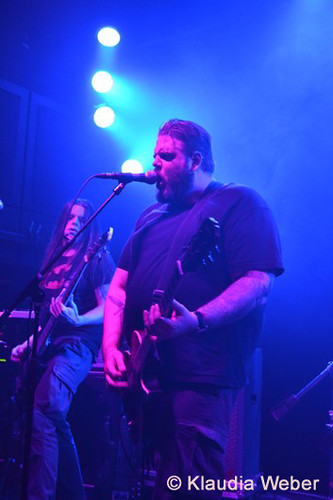