The morning never came – and the darkness descended over Europe… because they have the sun swallowed up in the dark Finland: [Doom Prog Death] Metal band SWALLOW THE SUN started ten years after their sensational debut album “The Morning Never Came” on an Anniversary Tour with eleven shows through Europe and also to HAMBURG.

On the tour with them were the Italian, existing since 2005 Gothic Doom Metal band THE FORESHADOWING. They opened the evening with classic and slow motion gloom, heavy, tragic, massive. Singer Marco Benevento leaded with powerful, clear voice the music in a melodic direction. Singing and compositions were through the songs very similar and hardly entertained by diversity, but they laid a foundation stone for the evening: dark heavy load. THE FORESHADOWING Website

The hall had filled with more guests; the black-clad crowd came from the outside falling leaves into the October climate of the concert. And here entered one of the pearls of the British dark alternative rock the stage: ANTIMATTER.
“The saddest band in the world”, founded in 1998 by Mick Moss and ex-Anathema Duncan Peterson – looks back on six studio albums and several changes, so to say musical versatility. Meanwhile, it became to a kind of solo project of Moss, which integrates new musicians as required. British murkiness spread, rich in melodies, suitable for autumn, beautiful and melancholic at the same time, atmospheric and full of subtleties. ANTIMATTER Website 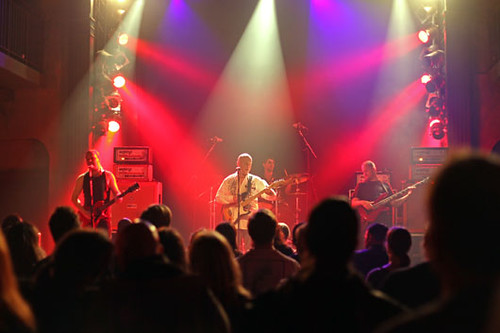 No less intense, but considerably more massive it finally came to the appearance of the headliners SWALLOW THE SUN, whose career accompanied the Stalker Magazine for years with reports: Heavy Doom is the foundation on which Mikko Kotamäki puts his varied vocals, mostly in the form of deeper Death Metal growls, which are broken up by clean vocals and evil, ghostly croak. With eyes closed and sunk inside an own cosmos the singing seems to be like a recital, to which the guitars thunder and the keyboard, built at the front edge of the stage, rolls out a carpet of painting in sounds.

The fans were entranced and demanded encores, which were also once played in the lenght of nearly a second concert. Although some headbangers undeterred shook their manes, the more contemplative, quiet aspect of metal and rock has been demonstrated that evening. And this spirit has its adherents in both the north and in south Mediterranean… There is darkness everywhere as this show proves, from the organizer ROCK THE NATION a well put together package.

Khroma: Stormtroopers on a music mission