Not far from Helsinki the ducks (ankka) lure a lot of audience, and Ankkarock is indeed quite attractive because of a nice size, great park location, that means somewhat idyllic, a lot of ponds and even those already mentioned feathered creatures. Three stages naturally mean that a lot happens simultaneously, but a wide program variety – Metal, Punk, Alternative, Finnish and international acts – make your choice easy, and there is something for everyone. Theoretically, due to at least 60 min playtime, you could see all of the bands, practically it might be a bit difficult squeezing through the crowd (14.000 on the first day, 17.000 on the second) blocking off those steep and narrow paths through the woods…

The organisation was efficient and provided extremely well-dressed stage hosts … err… but I would recommend to get a map before entering the area; just looking for the press entrance was sort of an adventurous expedition. And you might have to battle with mosquitos – really nasty beasts! The heat this year made “muista juoda – don´t forget to drink!” the festival motto. Yet obviously not all visitors realized that it referred to WATER…

(In case text illustrations no longer work, check the interactive galleries at the end of the text)

The first day was dominated by Finnish artists (Kotiteollisuus, Maija Vilkkumaa, Zen Cafe, Ismo Alanko), and the winners of a newcomer competition (Ankanpoika – duckling) opened the festival. There were also a lot of program changes, Poisonblack had to cancel, and instead of the Russians Leningrad their Rockabilly-fellow countrymen Spitfire took to the stage.

Ankanpoikarock-Winners
The Finnish School of Rock! A couple of kids, who learnt their instruments probably without the help of Gene Simmons or Jack Black, tried their rocking luck on the biggest stage of the festival in front of an already surprisingly big crowd, probably mainly parents, classmates and friends. They played cover versions of rock classics ranging from Metallica and Alice Cooper to Three Doors Down. Very brave! (KG)

I Walk The Poisonblack
The announcement that Ville Laihiala and his men couldn’t perform due to illness, whatever that means in this case, was taken with tears and disappointment. Once again gotten up waaayy to early for nothing… But the Retrorockers from I Walk The Line filled in on short notice with a shortened set. The music was quite nice and mostly characterised by organ sounds. Many fans stuck around with the band – there wasn’t that much going on on the festival site as an alternative either. (KG)

Hanoi Rocks
I´ve never really liked Glam, but those genre veterans proved to be something that much younger bands could take as example. In Finland they seem to have superstar status again, since releasing “Another Hostile Takeover” and the recent single “Fashion”. Fun on stage is here not a matter of fancy clothes alone – Michael Monroe showed his excellent shape regarding voice and fitness, jumped into the photo pit, climbed the stage posts, played saxophone in between – indeed a circus horse that manages to impress “innocent bystanders”. Their cool version of CCR´s “Travelin´ Band” wrapped up their show. (KW)

The Sounds
80’s synth sounds with The Sounds! Also with their clothes and hairdos the Swedes somehow got stuck in the worst of all centuries, who still wears leather patchwork tops in the shape of a sack today? The performance was mostly dominated by the impressive leg work of singer Maja Ivarsson. The breezy blonde in her shorts drew all the attention to herself and put not only the male fans under her spell. Setopener was already their biggest hit “Living in America”, but also songs like “Painted by numbers” were jauntily performed. A good show and this although the instruments, according to Ivarsson, only turned up 40 minutes before the gig. (KG)

Apulanta, the motive of this year´s Ankkarock poster, would have been worth seeing, as this trio developed their rough Punk to sophisticated but still very heavy Rock and indeed deserve their Finnish superstar status. Yet they stood no chance, as almost at the same time The Gathering played their last Gig with Anneke… somehow I had the impression that in front of and on stage some people had to fight tears sometimes. And I admit, it happened to me, too, listening to those intense emotional songs, Anneke´s exceptional voice and watching this passionate performance, the lights – for the last time???!!!??? To give an impression, I put an extra lagre amount of Gathering photos into the Ankkarock gallery! (KW)

The Gathering
Sad but true, Anneke is gone, boohoo! At Ankkarock, of all places, she gave her last concert with the band. The conditions, however, were great, many fans from all over the world had come, the sun smiled and Anneke smiled back. She still seemed to have a lot of fun on the stage, with the band but of course the private life is now more important. They played songs from almost all albums amongst others “Travel”, “Eleanor”, “Saturnine”, “Monsters”. Before the encore Anneke gave some words of gratitude to the band for 13 years of brilliant music and of course also to the fans. When seeing Anneke smiling all the time it’s hard to believe that she can imagine her future without the band, I personally can’t imagine The Gathering without Anneke and so I hope that there will be some kind of reunion some day, like with soooo many other bans too. Until then, The Gathering on continuous play…(KG)

After the opening by another newcomer act it was rather the Finns, and rather Pop that started the second day: Damn Seagulls, Maj Karma , Disco Ensemble, Lapko, Poets Of The Fall. But the Sunday belonged to big international stars, and some of those also come from Finland.

Amorphis
Once again it was a great show of those guys with frontman Tomi “Medusa” Joutsen, offering a best-of-setlist that included classics as well as new songs, e. g. The Smoke, Tuonela, Against Widows, Black Winter Day. Fans should indeed look out for the new album that will be on the market soon; “Silent Waters” already gave a taste of it at Ankkarock. Tomi also showed his humour reacting to “play Paranoid” shouts, luckily they didn´t do that but played “House Of Sleep” as great finale. (KW)

The 69 Eyes
The Finnish hit factory proved on the main stage that even in merciless heat and daylight those Helsinki Vampires give you the cool Goth´n´Roll feeling. Their opener Framed In Blood was a good choice, and all that ear candy – e. g. Never Say Die, Dance d´Amour, Devils The Chair, Rockers, Feel Berlin, Gothic Girl, Brandon Lee, Wings&Hearts – had the audience cry for more, which was Perfect Skin and Lost Boys. (KW)

Dir En Grey
A new day, another Japanese band that makes little girls scream. This time: Dir En Grey. In the past they were one of those Visual Kei bands but now the guys from the land of the rising sun have opted for a more American look and perform only in jeans and shirts, singer Kyo also without his shirt but with a couple of “war wounds” instead, which were probably caused by several other, more intensive performances of the band. The music sounds also more like American Metalcore, amongst others the band has toured with the Deftones, and so it’s a good thing to adapt especially if you want to conquer the American market. And now everyone: Aaaaaaaaahhhhhh! “Sukiyo!” (KG)

The Ark
The Eurovision Contest had given me some warning already, but still, the first songs of that Swedish act just made me want to disappear, immediately. OK, singer Ola Salo has such a cute smile and sexy swivelling hips… but for me it´s still irrelevant Bubblegum Rock, quite nice to sing along with but… well. They made some jokes on stage, changed their clothes (the whole band all in white) and had some acrobatic gimmicks, but I do not care much about this band. (KW)

Millencolin
Good ol pop punk without any hidden thoughts from Finland’s neighbouring country and as it should be for well-behaved Swedes the guys from Millencolin also have some Finnish vocabulary on hand. Well, it’s just enough to say “kiitos” and “Suomi” but that’s already enough to get the people going that evening. Everything fits just perfectly – the sun is shining, the crowd is sprinkled with water by the securities from time to time and then there’s fun music that makes the crowd jump up and down. According to guitarist and Eminem look-alike Erik Ohlsson there was even a circle pit. The people had fun and the band, too. (KG)

Sonata Arctica
Actually I needn’t to have taken any pictures of Sonata Arctica because Tony Kakko wore almost exactly the same clothes like at the Ruisrock festival only a month ago (see pictures there), hopefully they were washed in the meantime! The setlist, however, was definitely a different one and so my current favorite guilty pleasure song “Paid in Full” was already the second song they played and I couldn’t decide between singing along and taking pictures in the media pit. Somehow this band is always fun and entertaining to watch and with songs like “Victoria’s Secret”, “Full Moon”, “Black Sheep” and of course the brilliant “Don’t Say A Word” plus the accompanying pyro and fire elements the band can’t do wrong anyway. Pure fun! (KG)

Nine Inch Nails
had a quite violent opening – visually, acoustically, and in the photo pit you were in danger to be hit by a flying microphone stick… Before the show I had my doubts that NIN can pull of a lightshow comparable with their Helsinki gig (check out STALKER concert reviews), but they proved me wrong. Although it wasn´t totally dark yet, a huge LED wall – where the guys sometimes hid behind – displayed a lot of breath-taking effects. Two thirds of the show had already been played when Trent Reznor finally addressed the audience, claiming that NIN played very often in Finland this year (well, TWICE…), thanking all fans and suggesting that they should just go and steal the new album “Year Zero”…

The Beginning Of The End, March Of The Pigs, Closer (Wanna Fuck You Like An Animal) opened a best-of-setlist that didn´t leave anything to desire: Head Like A Hole, Only or Survivalism and Great Destroyer from the new album – the audience was swept away by alternating brutal riff attacks and psychedelic synth-parts, nobody left untouched. After their ritualistic equipment demolition “Hurt” was added – Trent solo on keyboard, yet overly punctual fireworks were quite disturbing… Reznor did not interrupt the song, improvised until the last sparks faded, then initiated the grande emotional finale, the audience sang along – so the fireworks DID fit after all. What a great band, worth to see, no matter how “often” they play in a year… (KW)

All text illustrations as interactive gallery: 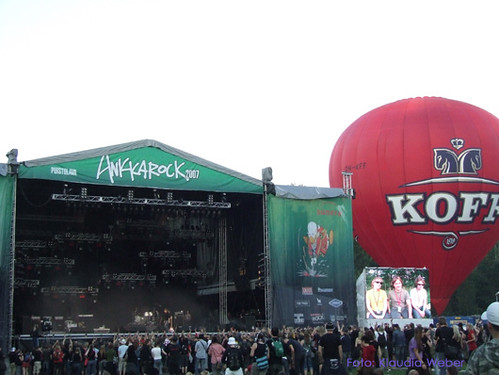 IRON SKY: Yes, they can!